PM – Obama embarks on peace in the Middle East 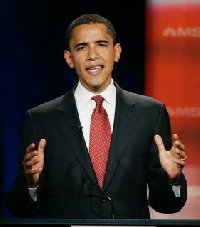 MARK COLVIN: The Obama administration is about to venture onto the difficult foreign policy task of trying to negotiate an Arab-Israeli peace deal.

Over the next two weeks Barack Obama will hold a series of meetings with the leaders of Israel, Egypt and the Palestinian Authority.

The administration has already made it clear that it’s determined to avoid delays as it pursues its goal of a two state solution in the Middle East.

KIM LANDERS: President Barack Obama is promising long term, top level US engagement in the Middle East and the White House says he’s “optimistic” about the prospects for progress in the stalled Arab-Israeli peace process.

Former British Prime Minister Tony Blair, who’s now the Middle East envoy on behalf of the United Nations, the European Union, the US and Russia says the new Obama administration is providing an opportunity not to be missed.

TONY BLAIR: I would say up until the end of this year, there is a critical window of opportunity and it would be sensible for us to pass through it.

KIM LANDERS: So the looming visits to Washington will be closely watched.

Aaron David Miller is a public policy scholar at the Woodrow Wilson Center for International Scholars in Washington.

He’s been an advisor to six US secretaries of state on Arab-Israeli negotiations.

He says it’ll be “excruciatingly difficult” to come up with an agreement that resolves the core issues between the Israelis and Palestinians during these meetings.

AARON DAVID MILLER: You have a lot of rhetoric which suggests a change in tone and there’s a sense about the Obama administration that, unlike its predecessor, they understand that diplomacy has to be transactional.

Whether or not it’ll all translate once the need to actually define and try to implement a strategy is another matter and there’s no way to predict that now.

DANIEL LEVY: The test will be what are the policies that one continues with and that one promotes as the Obama administration and crucially, whether the Obama administration allows the parties, all of the parties, to take this peace effort and walk it to a place that I would call the comfort zone for the parties, where real decisions don’t have to be made, where big issues don’t have to be addressed, where they can get back to where they’re comfortable with, which is blaming each other.

KIM LANDERS: New Israeli Prime Minister Benjamin Netanyahu will be the first of the three leaders to meet President Obama.

One possible sign of friction between the two men could be Prime Minister Netanyahu’s support for continued building in existing settlements in the West Bank.

JOE BIDEN: Israel has to work towards a two state solution. You’re not going to like my saying this but not build more settlements, dismantle existing outposts and allow the Palestinians freedom of movement based on their first action.

KIM LANDERS: So will the Obama administration be tougher on Israel?

Aaron David Miller doesn’t think the change in tone means the US is going to change its policy.

KIM LANDERS: Shibley Telhami is the Anwar Sadat Professor for Peace and Development at the University of Maryland.

He says the Obama administration has to articulate its vision for an Arab-Israeli peace deal soon.

KIM LANDERS: But so far, the prospects for progress in the stalled peace process appear slim.