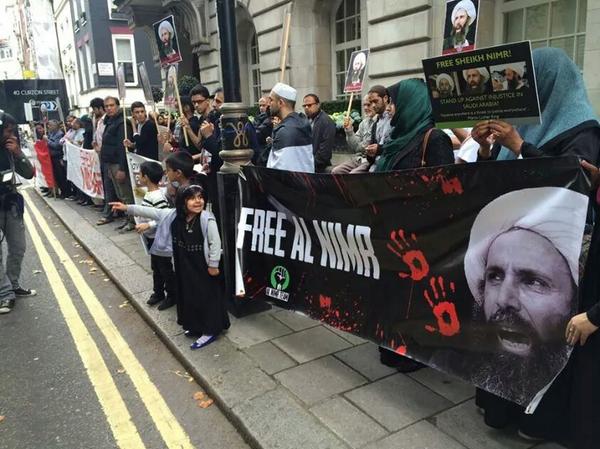 IHRC is urging the British government and the United Nations to pressure Saudi Arabia to stay a death penalty handed down earlier this month to a charismatic political dissident.

Sheikh Nimr Al-Nimr is a leading Shia scholar who was arrested for his outspoken criticism of the Saudi monarchy and his calls for equality and reform on trumped up charges of apostasy and terrorism. He has been severely tortured in detention.

Sheikh Al-Nimr was detained in 2012 after a police hunt which culminated in him being shot four times. The sheikh’s arrest came against the backdrop of rising public unrest and dissension in Saudi Arabia as the Arab Spring took hold across the Middle East.

In the following year, new protests against the Saudi authorities’ decision to send troops to quell the revolt in Bahrain broke out in the majortity-Shia Eastern province, where Sheykh Al-Nimr criticised the government’s policies and demanded constitutional reform. During these protests security forces used live fire against protestors, killing many and starting a series of arrests against demonstrators and the medical personnel who treated them.

Sheikh Nimr, who has a wide following among Shia in Eastern Province and other states, has supported only peaceful protests and eschewed all violent opposition to the government. In 2011, he told the BBC that he supported “the roar of the word against authorities rather than weapons… the weapon of the word is stronger than bullets, because authorities will profit from a battle of weapons”.

The Specialised Criminal Court, Saudi Arabia’s terrorism tribunal, which handed down the death sentence has been widely criticised for flagrant due process violations, including broadly framed charges that do not resemble recognisable crimes, and denial of access to lawyers at arrest and during pre-trial detention, making it almost impossible to prepare cases for trial. The court has also been criticised for dismissing without investigation allegations of torture and admitting as evidence confessions that defendants said were coerced.

In our letter to the UK Foreign and Commonwealth Office we draw attention to the British government’s own concerns about the use of the death penalty in Saudi Arabia and urge it to apply pressure on Riyadh to stay the execution.

The letter to the United Nations Office of the High Commission for Human Rights states: “We are aware that the OHCHR has in the past expressed grave concerns over Saudi Arabia’s use of the death penalty. As such, the Islamic Human Rights Commission (IHRC) calls on the OHCHR to do all that is necessary to put pressure on the Saudi Arabian government to stay his execution and to secure his release.”