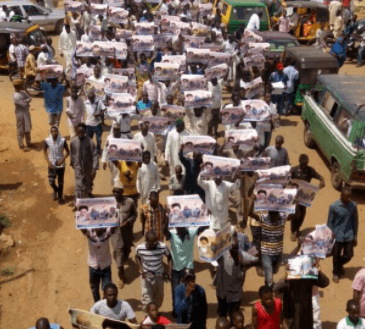 Police have shot at a pro-Palestinian demonstration in the northern city of Kaduna killing at least one person.

The 10 year-old was shot when police attacked the peaceful procession in a bid to stop it proceeding through the state capital.

Hundreds of thousands of people were taking part in the rally when police attacked without warning using tear gas and live rounds. Hired thugs using makeshift weapons are also reported to have set upon the demonstrators.

There are reports of many wounded and arrested.

The annual Al Quds Day demonstrations have historically been organised by the Islamic Movement of Nigeria, which was banned in last year by Kaduna state government and whose leader, Sheikh Ibrahim al-Zakzaky, has been in prison without trial since a massacre of IMN supporters and members in late 2015.

The ban is being used as a pretext to further weaken the movement, Shortly after it was announced last year the authorities indulged in a killing spree of mainly Shia Muslims taking part in Ashura processions in the state and elsewhere during the Islamic month of Muharram.