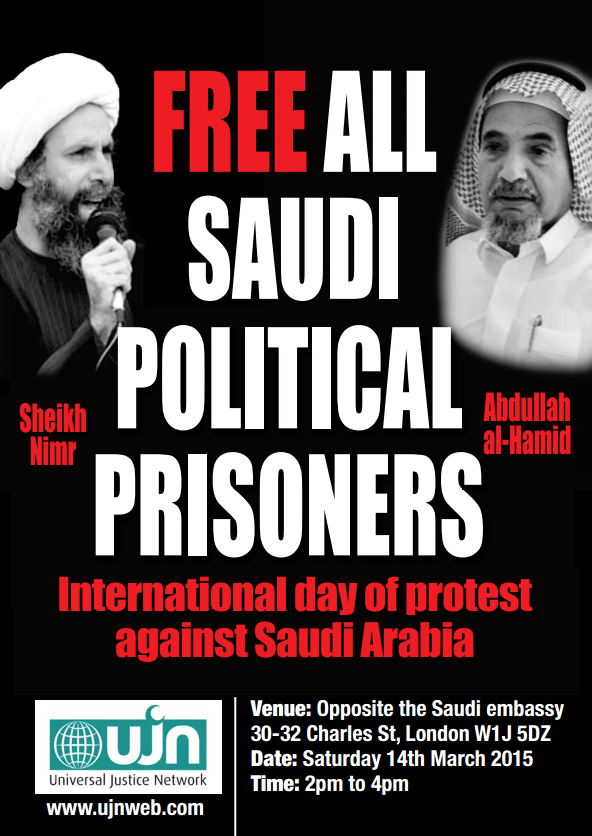 London is to host one of several protests in an international day of protest designed to draw attention to the fate of thousands of political dissidents imprisoned in Saudi Arabia.

The event on Saturday March 14 by the Universal Justice Network is designed to highlight the little publicised persecution faced by those who criticise the ultra-conservative monarchy and its policies.

According to a 2011 report by IHRC, there are an estimated 30,000 political prisoners in Saudi Arabia out of a population of approximately 18 million Saudi nationals.

Abdullah al-Hamid, 66, is currently serving an 11-year prison sentence at al-Ha’ir prison in Riyadh, where he is reported to have been ill-treated. He is one of 11 members of the Saudi Civil and Political Rights Association (ACPRA) – one of the country’s few independent human rights organisations – who have been jailed or are on trial facing imprisonment, in connection with their human rights work over the past three years.

The Saudi Arabian regime has targeted the founding members of ACPRA in a bid to destroy the organisation and silence its members, as part of a broader crackdown on political activism and freedom of expression since 2011.

Another prominent case is that of Sheikh Nimr Al-Nimr, a leading Shia scholar recently sentenced to death on trumped up charges of apostasy and terrorism for his outspoken criticism of the Saudi government and his calls for equality and reform. He has been severely tortured in detention.

Sheikh Al-Nimr was detained in 2012 after a police hunt which culminated in him being shot four times. His arrest came against the backdrop of rising public unrest and dissension in Saudi Arabia as the Arab Spring took hold across the Middle East. Riyadh has been the biggest supporter of counter revolutionary forces in the Arab Spring, instrumental in restoring the Egyptian military to power and sending troops to help the Bahrain royal family quell a popular uprising there.

Last year IHRC undertook a letter writing campaign urging the British government and the United Nations to pressure Saudi Arabia to stay the death penalty. Although it is rumoured that King Abdullah may have suspended Sheikh Nimr’s death sentence, IHRC believes that pressure should continue to be applied on the Saudi government to free him and all political prisoners and enact meaningful political reforms in the country.

In addition to London, protests will be held on the same day in Nigeria, Malaysia and Indonesia.