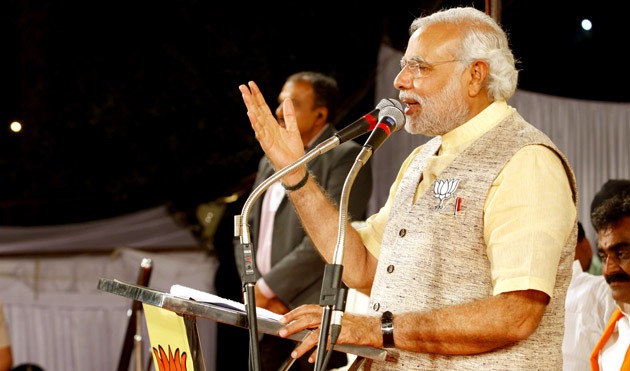 At a time when a key plank of government policy is concerned with repressing Muslims in Britain and subjecting them to discriminatory treatment under the pretext of fighting extremism, we find it odd that David Cameron should be entertaining a world leader who embodies the word.

Hailing from the ranks of the Hindu supremacist RSS movement, Modi presided over one of the biggest communal massacres of Muslims to occur in recent history in India while chief minister of Gujarat in 2002. Modi’s state government never investigated the bloodbath. It was only through intervention by India’s National Human Rights Commission, the Supreme Court, and local activists and victim groups that charges were filed; and prosecutors were able eventually to secure convictions for over 100 people, including a member of Modi’s cabinet. Trials are ongoing in several other cases.

Although a Supreme Court-ordered investigation decided in 2012 that there was not enough evidence to prove Modi’s direct complicity some of the victims still have appeal cases pending, seeking to reopen the inquiry.

Modi’s tenure as PM has been characterised by an escalation of violence against Dalits, Muslims, Christians and women, including the brutal lynching of a Muslim man in Dadri on suspicion of consuming beef. His administration has also clamped down on civil society groups and the press, especially those seeking to improve environmental and human rights.

We find it strange that the government is today rolling out the red carpet for a man whose extremist views while chief minister previously led to him being banned from setting foot in Britain to peddle his hate.

IHRC chair Massoud Shadjareh said: “Modi’s presence here just goes to underline how extremism is just a convenient tool for the government to silence its critics. Maybe we shouldn’t be all that surprised to see one extremist leader shaking the hand of another. After all, both Cameron’s and Modi’s respective records show that they have a common aim in repressing Muslims.”