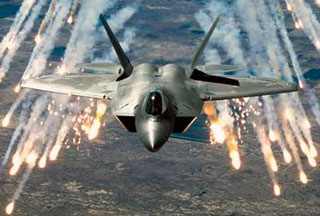 The Islamic Human Rights Commission is outraged by the recent attack launched by US fighter jets in the North Western Yemeni province of Sa’ada. The reports indicate that 120 Houthis have been killed and 44 suffered from serious injuries. The US military provides air cover to Saudi-Yemen joint forces which have launched an offensive against Houthis in the region.

In another air raid against Houthis civilians on Sunday, Saudi fighter planes bombed a market in the Northern city of Razeh killing 70 civilians. There is also evidence that Saudi planes have used white phosphorus bombs against civilians in Northern Yemen.

The UN has raised concerns about the humanitarian crisis which has unfolded and has left thousands displaced and trapped within areas of heavy fighting.

Yemeni-Saudi officials claim that the conflict is a result of sectarian tension. However, Houthi leaders have categorically denied these allegations and stressed that they have been fighting against political, economical and religious oppression.

The US used the pretext of war on terror when using military action against Afghanistan and Iraq however, in the case of the Houthis in Yemen there is no such excuse. It is merely a plain and unnecessary interference in the internal conflict within Yemen.

IHRC censures the death of civilians by US fighter jets as well as the Yemeni-Saudi assault against the Houthis. Additionally IHRC is extremely concerned of a further rise in civilian casualties.

“It’s absolutely outrageous and sickening to witness the ongoing massacre of Houthis in Northern Yemen. The US war machinery that has been shedding the blood of innocent Muslims in Iraq and Afghanistan, is now targeting Yemeni Muslims. We live in a world where the leader of a country that has waged multiple wars is awarded the Nobel peace prize and not long after the ceremony, he sends his air force to drop bombs on a civilian population. This situation is an example of the organised massacre of the Houthis in Northern Yemen and unless there is an immediate end to military action, instability will plague the region for decades to come.”