Al-Quds Day demo for Palestine back by popular demand 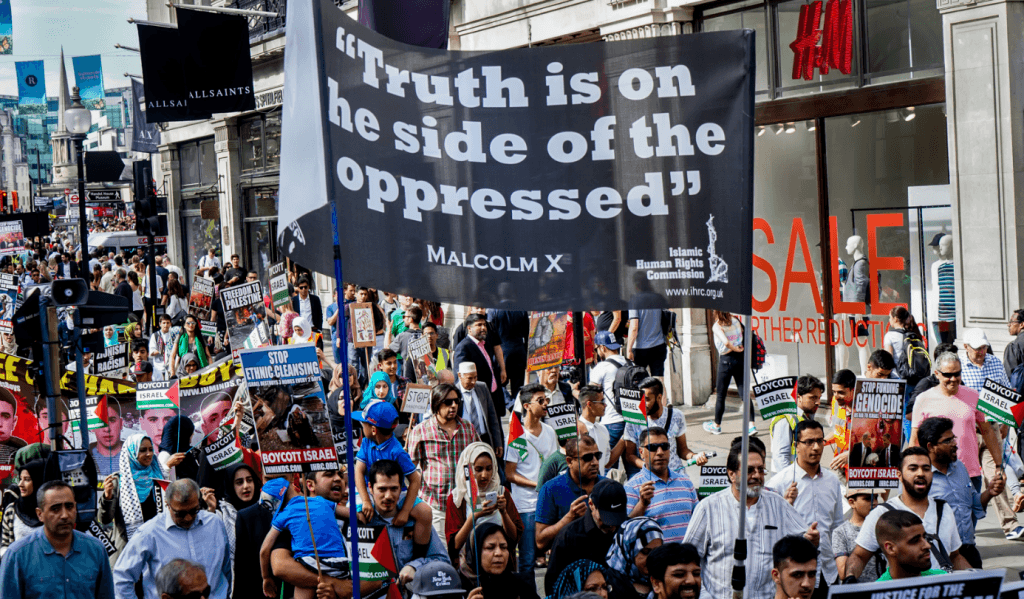 The annual al-Quds demonstration in London in support of Palestinians returns this year after a two-year stoppage due to the Covid-19 pandemic.

Thousands of people are once again expected to gather in the capital to voice their support for the Palestinian cause and repeat their call for an end to the Zionist apartheid regime’s atrocities and occupation of Palestine.

Recent years have seen an escalation of brutality against Palestinians in their homeland as Arab regimes have sought to normalise relations with Israel, giving the Zionist regime a green light to increase its oppression. The theft of land demolition of homes for illegal settlers continues apace, the siege of Gaza by both Israel and Egypt continues to confine over two million people to an open air prison, and the Israeli army continues to terrorise Palestinian civilians, assassinating and arresting those who resist.

However, mainstream narratives relating to Israel are shifting. In particular, the term apartheid is now widely being employed to describe Israel’s colonial dispossession and domination of the Palestinians by human rights groups and the United Nations. Amnesty International recently released a report echoing findings already accepted by prominent international human rights NGOs; Human Rights Watch and War On Want, as well as similar Israeli NGOs; B’Tselem and Yesh Din, that Israel’s treatment of Palestinians amounts to Apartheid.

The demonstration is scheduled for Sunday 24th April. Participants will assemble outside the Home Office (2 Marsham St, London SW1P 4DF) at 3pm, before marching to Downing Street, where they will hear speeches by prominent anti-apartheid guest speakers.

IHRC is also continuing with the #FlyTheFlag and #boycottapartheid campaign which proved highly successful during the pandemic. This calls on freedom seeking people from around the world to raise the flag for Palestine from 1st April. People can fly the flag and promote #boycottapartheid outside their home, workplace, on their car, or wherever they find suitable. More information is available here.

Muslims are also being urged to continue to boycott Israeli dates again during the holy Islamic month of Ramadan in which the faithful traditionally close the daily fast by consuming the dried fruit.

This year, IHRC has written to leading British supermarkets reminding them of their obligation under international law to ensure they do not sell dates produced by Israeli companies in the occupied territories. It is estimated that 60% of Israeli dates come from illegal settlements in Israeli-occupied territories and are often then sold by supermarkets under their own brands.  These settlements are built on land stolen from Palestinians, whose houses and other properties are often demolished to make way for homes and businesses belonging to illegal Israeli settlers.