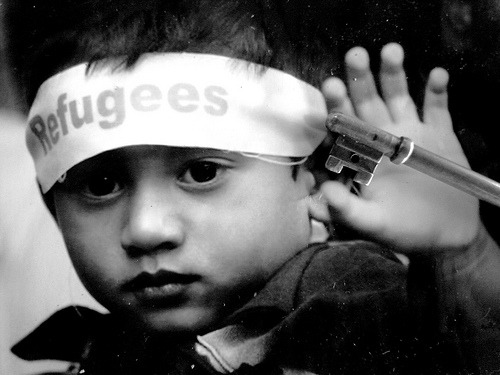 Facebook
Twitter
LinkedIn
WhatsApp
Email
The event [1] is part of a series of events marking the International Day of Solidarity for the Rohingya.  The day was called by the  International Action Committee Stop the Ethnic Cleansing of Rohingya in Myanmar [2], who describe the day as:
“… a wake up call to the world not to ignore the plight of ethnic Rohingya Muslims who are about to be exterminated from their own land in Arakan.”
Other events taking place include protests outside the Myanmar Embassies and UN Offices in Malaysia, Indonesia and Iran.  Students in India are going on hunger strike to protest the Indian government’s lack of support for the Rohingyas plight.
Chair of IHRC, Massoud Shadjareh said:
“The world has long feted Aung San Suu Kyi and the NDL as progressive.  Their statements and actions show that in fact they deny the citizenship of their fellow countrymen and women and promote ethnic cleansing.  It is time this charade was exposed, and action taken by regional powers to prevent this corrupt transition from military junta to militant majoritarianism.”
For more information please contact media@ihrc.org or sasuie@ihrc.org or call  (+44) 20 8904 4222 or (+44)7958522196.
Notes to editors:
[1]  The vigil will take place from 6.30pm – 7.30pm, at 19a  Charles Street, London, W1J 5DX
[2]  Visit here, for full press release [ENDS]
——————————————————————————————
IHRC is an NGO in Special Consultative Status with the Economic and Social Council of the United Nations.
Islamic Human Rights Commission
PO Box 598
Wembley
HA9 7XH
United Kingdom
Telephone (+44) 20 8904 4222
Fax (+44) 20 8904 5183
Email: info@ihrc.org
Web: www.ihrc.org
Twitter: @ihrc