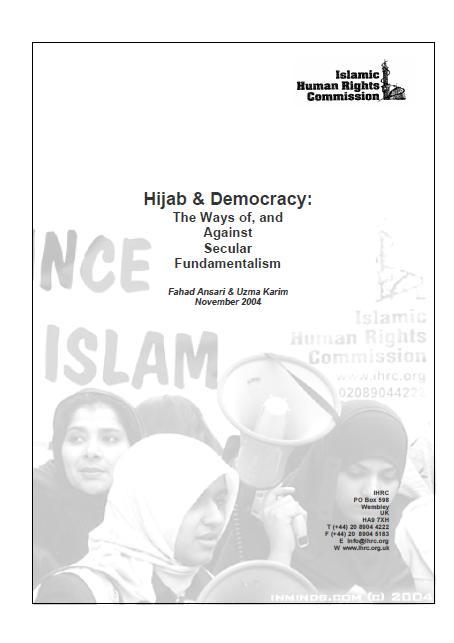 In December 2003, the French government confirmed that from the new school year in September 2004, ostentatious religious symbols were to be banned.

At the time of writing (2004), 13 schoolgirls have been expelled from schools for refusing to remove their hijab – headscarves, a further 62 cases are pending. In Germany the Supreme Court has upheld a decision to ban teachers from wearing hijab [headscarf, veil] in schools. Belgium is looking to copy the French laws and other European countries have started looking at these examples. In the UK, the High Court upheld a ban on the jilbab (long coat) at a Luton school and further cases have come to the fore since.

This report is a compilation of briefings written for IHRC that were produced over the last year in response to these events, addressing good practice, where it has hitherto existed, and highlighting the breaches of international law and norms where it has become ever apparent in the last twelve months.

The attack on hijab is not new – indeed in France over the last decade it is estimated that 400 girls were expelled as a result of the licence granted to head teachers to ban hijab at school. Its sudden upsurge and the trend across Europe bodes ill for the rights of Muslim women to practice their faith and enjoy the same rights as their fellow citizens.

As the following chapters show, Muslim women in Europe have become the latest targets of resurgent prejudice that combines misogynistic precepts with racist and Islamophobic rhetoric.