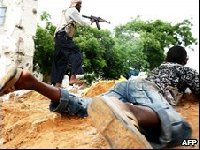 Residents reported heavy shelling in the heart of the city.

The fighting follows a few days’ lull after the Islamists made a strong push to capture the capital from the U.N.-backed government earlier this month.

Lt. Yusuf Osman Dumal, the government’s commander-in-chief, said the fighting began when Islamists attacked government positions, but residents said the government used the temporary respite to reinforce and re-equip the troops under its control and it appeared to be a planned government offensive.

Resident Abdi Haji said hundreds of government troops had attacked positions held by Islamist fighters in the south and north of the Somali capital.

He said there was heavy shelling around Wadnaha road, which the government lost to Islamist fighters earlier this month. Wadnaha connects the north and south of the city and is one of the four major roads in Mogadishu.

Dr. Hassan Gutale at Deynile hospital said reports of casualties were still coming in. He knew of four civilians wounded in the fighting. Abdi Muse of Nationlink Voluntary Ambulance service said they had taken 10 wounded civilians to Medina Hospital in the capital.

On Thursday the United Nations reported that around 46,000 residents had fled the fighting in the capital. The humanitarian situation is dire, with many families living without access to food or water under trees or by the side of roads sheltered by nothing more than a few scraps of plastic.

The Islamists are attempting to dislodge the U.N.-backed government from the few blocks of the capital it still controls.

But the government is supported by 4,350 African Union peacekeepers, who are helping hold key installations like the port, the airport and the presidential palace.

On Wednesday, regional leaders reaffirmed their support for the beleaguered government and said more support was needed for the AU peacekeeping mission.

Somalia has been torn apart by fighting since warlords overthrew a socialist dictator in 1991.

The arid Horn of Africa nation is now controlled by clan warlords and criminal militias and wracked by a civil war between Islamist insurgents backed by Eritrea and a precarious new U.N.-backed government struggling to assert its control.