Social Discrimination: Across the Muslim Divide 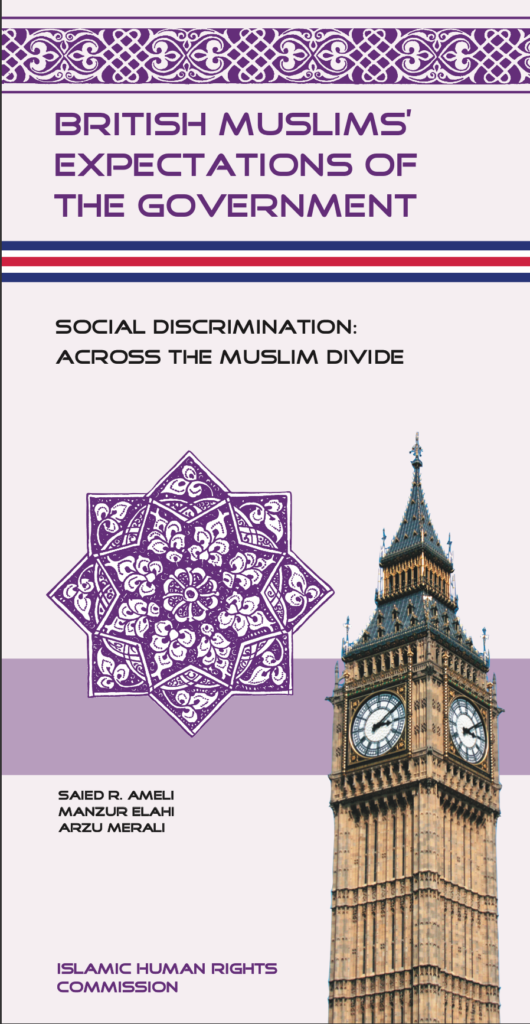 ‘Social Discrimination: Across the Muslim Divide’ is the second report in the British Muslims’ Expectations of the Government (BMEG) project.  Written by Saied R. Ameli, Manzur Elahi, and Arzu Merali for the Islamic Human Rights Commission, it was published on 16th December 2004, (ISBN 1-903718-28-7, 74pp) and was launched at the House of Lords in the UK that month.

To buy a paperback edition (£3) visit the IHRC Bookshop site.

This report examines how such discourses create a sustained atmosphere that eventually leads to the normalisation and increase of discrimination in everyday life, and even in the operation of new policy and the creation of new law. It uses data on discrimination gathered as part of the British Muslims’ Expectations of the Government project, as well as interviews and case studies to highlight not only the rise and pervasiveness of discrimination against Muslims, but its varying and worrying nature. From sophisticated and subtle exclusion to violent attacks, discrimination is becoming part of the life landscape for Muslims in the UK.

Protecting minority group rights is not exceptional or antithetical to the rights of individuals or majority groups, yet the public debate that informs governmental policy portrays a basic tenet of human rights as exactly this. It is worth remembering that group rights became part of the lexicon of international rights speak in the wake of unimaginable genocide on European soil that started with societal discrimination, ultimately reflected in law, which justified itself on the difference of the minority it murdered en masse from the majority.

This, and not uniformity to majority norms, is the very basis of universal citizenship – and the British government should take heed of its own citizens’ concerns when they say that they expect that their protection is affected by the recognition of their differences in culture, belief and practice from the majority society they live with. Not to do so is a human rights issue in itself.

Background to the report and project
The report is the second in the series British Muslims’ Expectations of the Government. It aims to chart the key areas of concern for Muslims and what they as participants in the social order expect the government’s engagement with them to be. The report looks at the nature and extent of general discrimination experienced by Muslims in their day to day life. Following the event of 9/11 there has been sudden upsurge of negative behaviour towards Muslims in Britain. In an attempt to find out the causes and the extent of general discrimination it employs theories of social psychology and communication; at the empirical level it employs both the results of a nationwide survey of nearly 1200 Muslims, qualitative answers of 40 Muslims and a number of case studies.

Research findings
The report suggests that negative views about Islam and Muslims have a role for negative behaviour experienced by many Muslims.

 The rise and rise of Muslim discrimination
•Muslim experience of discrimination is diverse ranging from hostile behaviour to abuse, harassment, assault and alienation.

• Overall about 80 percent of respondents reported that they have somehow experienced discrimination because they were Muslim.

The frequency of discrimination reported was:

 Difference and Discrimination
Discrimination against Muslims in Britain is articulated on the perception of group differences in morals, values, norms, standards, beliefs and attitudes. Perceived ‘Cultural incompatibility’ is the key factor. When combining factors of difference and disempowerment research findings show:

General discrimination can be subtle, ambiguous and of ‘border line acceptability’. Many discriminated persons are not sure whether they have been discriminated against and most of the time try to blame themselves in order to cope with negative behaviour.

• Our qualitative interviews particularly revealing in this respect as a number of respondents said that although they suspect they are being treated unequally, they are not fully sure.

 The ‘Double Penalty’ of discrimination
‘Double penalty’ phrase has been used to characterize the additive and adverse effects of multiple factors. When the combination of religion and ethnicity brings more discrimination.

• The exception to this is the category of White British Muslims. They reported most discrimination (88%) than any other ethnic group.

The term is ‘double penalty’ is also applied to the experience of those seeking remedy who are further discriminated against by the system.

Victims of this ‘double penalty’ in a number of cases and interviews particularly mentioned the Police as an institution where further discrimination was experienced.

The targeting of Muslim men by the police and security services appears to be factor in explaining this rise.

Additionally geographical location and the experience of discrimination were assessed.

 Denial of Differentiated rights through interpretation
Protection of minority rights involves some extra measures which have been enshrined through the UN charter and a number of declarations. But when prejudice becomes widespread and becomes part of our ‘commonsensical knowledge’ the notion of differentiated rights loses popular support and subsequently the ‘equal rights of citizens’ are interpreted from a narrow view.
The report does a press review on the case of Shabina Begum, who lost in the High Court to wear jilbaab at school, illustrates how ‘popular and commonsensical’ arguments about human rights can work against minority rights, and undermine human rights.

Challenging discrimination: Expectations from the Government

Respondents identified many factors that compounded the discrimination they face, including: the police’s insensitive approach; the absence of legal protective measures; and the reinforcement of negative stereotypes through government policies fuelled by the popular media.

When the respondents were asked, ‘What do you expect the British government to do to eliminate social discrimination in Britain?’ Their responses fell in the following categories:

•Education:
Inclusion of positive images about Islam and Muslims in the Educational Curricula.

•Anti-Prejudice Campaign:
Nationwide campaigns against anti-Muslim prejudice to make the practice of discrimination an anathema. It should give particular emphasize that practicing Muslims, should not be looked at as ‘others’.

• Changing Law:
As with ethnicity, religion should be taken as a factor into service delivery requirements to minimize discrimination against Muslims.

•Greater Contact:
Positive, individualized and voluntary interaction with practicing Muslims. This entails a wide range of programmes including ensuring Muslim representation across society.

•Put the Issue on the Agenda:
The pervasiveness and urgency of Muslim discrimination should be brought to the notice of all political parties and press so as to spotlight on the issue.

• High visibility Governmental Action:
Government’s response to negative comments and actions against Islam and Muslims should be as visible and forceful as anti Jew and Judaism.

Methodology and Sample Group
• The survey was undertaken across England, Wales and Scotland.
• The total of quantitative responses was 1125, and qualitative 40.
• The qualitative surveys were undertaken in 15 different localities across England, Wales and Scotland.
• The diversity of Muslim ethnicities was represented across the survey.
• Respondents’ ages reflected the predominantly youthful make-up of the British Muslim community.
• Approximately 90 percent of our respondents are British citizens and 55 percent are born in Britain.
• The majority of respondents saw themselves as practising Muslims