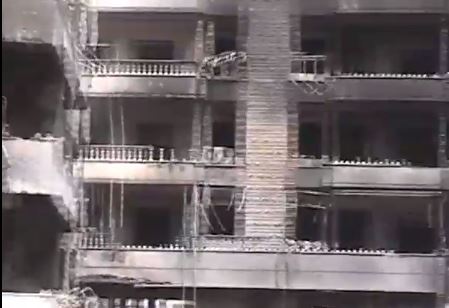 IHRC commissioned and undertook various projects to highlight its concerns about the Lebanon – Israel war of summer 2006 also known as the Summer War and the 33 Day War.

A legal briefing, The Blame Game: International Law and the Current Crisis in the Middle East.

A Court challenge to the British government over its decision to allow military supply flights from the USA to Israel to land and refuel in the UK.  Details of which can be found here:

In the aftermath of the war, IHRC sent a team of lawyers to Lebanon to assess the conduct of the war according to international standards.  It also commissioned a report looking at the wider international law context of the war.

These two reports can be found here:

Military Action by Israel in Lebanon: A Legal Assessment (original draft and notes on subsequent visit) (2006)

IHRC concurs with the recommendations of the latter, which follow at the end of the page.

Photographs of the trip referred to in both reports, can be found here.

Videos of the team of observers visiting sites and interviewing witnesses can be found here :

IHRC Observer team visit the aftermath of the 33 Day War

Recommendations in the aftermath of the 33 Day War

The infrastructure and economy of Lebanon has been severely hit and needs years to regain its pre-war standard. Israel effectively has fulfilled its promise “to turn the clock backwards” through its disproportionate and wanton destruction in Lebanon. Victims of war crimes should not suffer the additional burden of interest-bearing foreign aid contracts. Israel should pay damages and reparation for the destruction caused. An international conference should be called discussing the amount of damages to be paid by Israel. US military aid and EU’s preferential treatment of Israel should be suspended. Israel’s assets abroad should be frozen to pay for Lebanon’s reconstruction. It is, however, Israel’s responsibility to pay compensation to Lebanon, and the Fact-finding Mission to Lebanon calls for a Lebanese-Israeli Claims Tribunal under a panel of non-Western and non-Arab judges.

The war crimes of IDF commanders exhibited in the Lebanon war cannot remain unpunished. States may consider invoking universal jurisdiction to arrest the persons named in this report.[1]

International Investigation into the bombardment of UNIFIL positions

An investigation into the death of the four UN soldiers has been obstructed by the UN and Israel, although Israel accepted responsibility. The Security Council did not condemn the attack. The IHRC calls upon Muslim states to press the Security Council for condemnation and for a full investigation to find which individual is to blame for the killing of the unarmed UN soldiers. This investigation should, if necessary, take place outside the realm of the Security Council. States are called upon to assist the families of the killed UN personnel to have access to justice and information about  who in the Israeli military was responsible for the deaths of the victims.

Given Israel’s continued breaches of international law and the impunity it acted with since, the international community should consider the formulation of an International Criminal Tribunal for Israeli war crimes since 1948. Revocation of EU economic preferential status, a halt of international loans and military aid to Israel and a re-evaluation of Israel’s membership of the UN is called for. Since key permanent members on the Security Council have obstructed the rule of law in relation to Israel a solution outside the realm of the Security Council has to be sought. A multilateral conference should be hosted discussing sanctions on Israel.

Due to the high dud rate of cluster bombs they are effectively like land mines and render entire regions as no-go areas for generations. The Fact-finding Mission supports a complete ban of cluster bombs. The Dublin Convention of May 2008 is not sufficient.

The enforcement of international law has suffered under the obstruction of the Security Council. The report has highlighted this problem throughout. Alternatives have to be found to enforce international law through national courts, through sanctions enforced multilaterally and international tribunals set up by regional associations. The structure of the current international institutions have engendered the Summer War 2006. The IHRC welcomes a discussion contemplating creative ways forward to promote justice outside the realm of the international bodies of governance under the United Nations which unfortunately were part of the problem in creating crisis and an obstacle to peace rather than a catalyst to prevent the current crisis in the Middle East.