Introductory remarks at the conference : “The necessity for another civilization”

Home
Comment
Introductory remarks at the conference : “The necessity for another civilization” 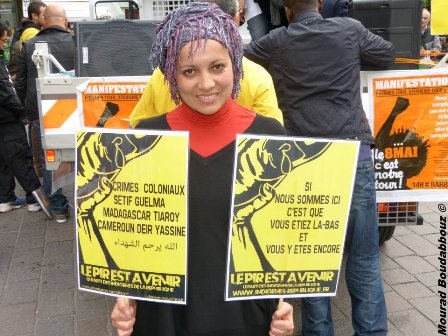 This conference to which participated also l’Alliance Noire Citoyenne (ANC) and le Front Uni de l’Immigration et des quartiers, was a big hit. More than 400 persons attended among which some could intervene in the debate that followed. We will publish the interventions as they come to us.

Tonight, we are celebrating Nicolas Sarkozy’s defeat. We celebrate the defeat of a president whose Prime Minister declared, a few months ago, that all civilizations are not equal. We celebrate the defeat of the man of Dakar’s speech: the man who declared with his renowned arrogance, that the African Man was not part of history, the man who called us scum, the man who promised he would flush us out, the man of the endless discriminatory laws, anti-immigrants and islamophobic. The man who was still saying, a few weeks ago, that halal meat was the number one priority of the French people. The man who relentlessly persecuted irregular immigrants [1].

Tonight, we are relieved, we are happy.

To each of the parties, we do not forgive their active contribution to “the Clash of Civilizations” theory.

That is why this evening has a strong symbolic range.

Symbolic because it is happening on May 7th, the following day of the presidential elections. It means for us that the political battle starts now. We will not wait for the next local or national elections to act. Strengthened by our militant conscience, we affirm our determination to take our faith in our own hands and not rely on goodwill, declarations of principles or the promises of the ones governing us, whether on the local, national or international levels. We affirm our determination to build a decolonial political organization.

This evening is symbolic as well because it takes place in Bagnolet,  a popular suburb, that, along with others, could not avoid the 2005 revolts. An ignored suburb during the presidential campaign while misery in all shapes and forms compile in it: social poverty, endemic unemployment, geographical segregation along with racial and social ones, police brutalities, and precarious educational system. That’s where the major popular classes live; that’s where populations from Africa, the Arab/Muslim world live, from the Antilles or Asia; finger-pointed, stigmatized for who they are, their identity, their culture, their beliefs…

The choice of May 7th is also symbolic because it represents the anniversary of a great decolonial victory : Dien Bien Phu’s, on May 7th, 1954. The colonial republic met one of her greatest defeats; one that sees Vietnamese people’s victory against an unfair colonial system. This victory is to all of us, here. At least, I hope so.

It is symbolic because it is also happening in 2012, 50 years after the independence of Algeria, 50 years after the African independencies. A fiftieth anniversary we should celebrate in all due respects to the martyrs of independence struggles, but that we yet have to analyze in a critical and objective manner, in front of what we are forced to see as confiscated independencies from the local authorities, complicit of a colonial and imperial system that never disappeared, which received some shocks but managed to transform in order to better survive. The revolutionary process that started in the Arab World with the fall of Ben Ali and which continues despite all the difficulties we know, is a sign that we are still allowed to hope; yet a lot needs to be done. We will still have to count our deads, comfort our orphans and dry the tears of the living ones.

This night is symbolic because it is happening at a crucial moment of history in the West. We face an unprecedented economic crisis affecting Europe and the U.S. in particular. We are probably living a turning point in humankind history since the domination of the West. We face the emergence of new economic, political and military poles like China, India or Brazil. A new geography of powers takes shape. It is the beginning of the end of Western hegemony. To think of new political alternatives at the world scale cannot be done without integrating these new parameters, even when we think policy from Bagnolet. Because if the European middle classes are globally affected, what is to be said of the ones living in the poorest neighborhoods of the West peripheries? We are certainly the first affected.

And if it appeared to us, today, May 7th, 2012 at the crossroads of all these symbols, necessary and imperative to ask the question of the civilization, it is because this civilization, that represents the pride of Mr. Guéant, we are its first victims, at least within Europe’s frontiers.

This civilization is inside of us.

It exists in the despise showed among political authorities for the languages and cultures of the populations living in the ghettos, like Africans who would have not yet entered history, considered as not worthy enough to be officially recognized and taught.

It exists in the obsessional hostility against Islam and its expressions within French society.

It exists in humanitarian interference in discourses justifying war or military interventions in Irak or Libya.

This civilization exists in the heart of the Arab World. There, its name is Israel.

This civilization has been around for 400 years : its coming to life brought the Native American genocide, its mission pursued with the slave trade which saw in fact the deportation of many million Africans and the death of many other millions, the world colonization, the destruction or even the disappearance of entire societies along with fratricide wars within European frontiers in the manner of the two so-called world wars that caused millions of deaths and which were the scene for the Jewish genocide, along with the Tziganes and so many others.This civilization pursues its work in Irak and Afghanistan. Its craziness directs her now against Iran.

This civilization has been around for 400 years : her name is Western Modernity. France is one of the major actors of this civilization, even if the actor is tired and getting old.

Bagnolet belongs to this civilization.

In this civilization we are integrated. We are integrated up to the neck. Yet paradoxically, we are criticized for not being integrated, or at least not enough.  Get integrated! It is imperative. it is an order ; an injunction. We have to comply. We have to obey. We have to submit ourselves without questioning. But get integrated into what exactly ? What is this other step that we have to cross ? Or that we perhaps already widely crossed ? What is the blind spot of this question ? What is the untold part from the injunction to the integration ? I may be venturing but in my opinion, it is to this civilization that they want us to integrate and that they want us to lose ourselves. When we are told that Islam has not yet done its aggiornamento, that it is a religion from the past that needs to be reformed in order to adapt to modernity, we are told nothing else but this: Islam has to submit to the Western Civilization, to its norms, its capitalist economy; Islam has to empty itself. Islam has to become White. Islam has to integrate.

Of course, we are resisting. Yet, with too many ambiguities; because we acclaim this civilization every day. We cherish it every day, we renew it every day, we guarantee its survival. The truth is, we are fascinated by this civilization. Often when Muslims, we prefer to claim the great Arab-Andalusian civilization, the only one able to challenge the supposedly greatness of the Western civilization. We prefer to do that instead of admitting that our parents come from a tiny douar of Aurès or from the Rif; often, when we are from Black Africa, we would rather set our history in the Pharaohs era an acknowledged civilization instead of saying that we come from a small village in Mali. Many times we prefer the tall and prestigious New York sky-scrapers instead of those, ancestral of Sanaa in Yemen. We seek in the Qur’an the proof of the atom to justify how modern we are. At what point we even have preceded Westerners in the making of the nuclear bomb. Because without the atom, no nuclear bomb and without nuclear bomb, no Hiroshima…

At the PIR, e have a slogan to which we are deeply attached, and which is “No to integration through ham”. Personally, I like it a lot. It means that we hold on to ourselves. It means we stick to what is left of our history and our traditions.  And I mean “what is left” because a great proportion of ourselves disappeared with the integration, an integration that has not started in France in the 60’s but at the colonial era where the entirety of our countries has been integrated in a great economic and civilizational project, led by the Western forces.

Well, eventhough I like this slogan, I fin dit very weak. Very weak. Because we could in fact resist to integration through ham. It is the easiest thing. We can preserve some ways of living, go to the mosque, pray five times a day, respect the other religious and moral obligations and in the same time, accept and be part of the hunt of irregular immigrants. Despise the newly arrived. This too, is integration.

50 years after Algeria’s independence,while Le Pen never regretted his use of torture, while Aussarès is still alive and admitted the murder of Larni ben Mhidi, some Muslims still managed to campaign for Marine Le Pen, some Muslims justified the closing of the European fortress and the deportation of irregular immigrants. These are the most advanced in the integration process. In addition to being pathetic, these positions among us reveal a high corruption of our soul just 50 years after African independencies. It is to us to continue or stop this integration.

I would like to conclude by an observation from our friend Ramon Grosfoguel, with us today, Berkeley University professor and decolonial activist. He invites us to adopt the perspective of Native Americans: Europeans’ left parties have a tendency to think that the capitalist system poured on the world in 1492 when America was “discovered”. And they explain the world from what they call the capitalist expansion from Europe to the Americas. Ramon Grosfoguel tells us no! We have to adopt the point of view of Native Americans when they saw the Europeans coming. It is not only the capitalism that they saw approaching. They saw a wave of values, a new religion, new weapons more destructive than the ones they used, languages that would override theirs. What fell upon them was not the capitalism only, meaning an economic system. Rather a civilization. It is why tonight, we do not say like the alterglobalist “another world is possible” but we say, with hopefully, the kindliness of Native Americans: another civilization is necessary!

End Notes:
[1] The French word, sans-papier is very recent and could mean both illegal alien or immigrants awaiting regularization. Irregular immigrant in English seems to balance the two notions for now.
[2] Adopted terminology to designate colonial relationship between France and Africa. For more details, check: LINK