The UK Anti-Terrorism Laws: Why Do We Oppose Them?

Home
Comment
The UK Anti-Terrorism Laws: Why Do We Oppose Them? 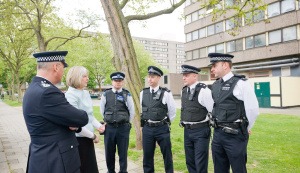 Dear Brothers and Sister in Islam,

I pray this finds you well and in the best of iman inshaAllah.

You may have already seen IHRC’s statement sent two weeks ago regarding the Counter Terror-ism Bill that is about to become law in the UK.

In it we state that we are not going to take part in this or any further consultations with the govern-ment on the anti-terrorism laws. I would like to ask you to take a few minutes to read my explana-tion of why we have taken this stand. I hope once you have read it you will be able to support us in what we hope will be a campaign against the injustices carried out in the name of anti-terrorism.

Why are we refusing to consult with the government?

When the government ask for people to send in their thoughts on this current law or other laws, it does not give a proper opportunity for anyone to oppose such laws. In this case in particular they simply ask for ideas on how to implement the laws. We believe that by entering consultations with the government we will simply be justifying the introduction of more anti-terrorism laws. This is not what society needs. We think this legislation and indeed the many previous anti-terrorism laws are unjust, and below I will explain some of the reasons why.

Why do we oppose all the anti-terrorism laws?

Many people argue that we live in a time of new terrorist acts and therefore we need new laws that deal with this new type of crime. All the anti-terror laws introduced in the UK since 1997 (that is four years before 9-11), have been very problematic and here are some reasons why.

Terrorist acts are criminal acts and we have enough criminal laws

There is no doubt that a handful of Muslims have been involved in what are called terrorist acts that are totally unjustifiable. These are violent criminal acts, some of which can be classed as murder, some of which are conspiracies to murder. We have laws under normal criminal law to prosecute these crimes.

However the anti-terrorism laws all bring lower standards of proof in the prosecution of offences. As a result, there are many people imprisoned because they may have thought about or even fan-tasised about committing such horrible acts. They have gone to prison for this. On the other hand, people who were not Muslim who had been found to be making bombs in order to target, among other things, mosques or who also wanted to blow up mosques, Muslims, black people etc, have been prosecuted under normal criminal laws or not even prosecuted at all.

This shows that the existing criminal laws on murder, violence and conspiracy are enough to pros-ecute terrorist crimes. It also shows that the anti-terrorism laws are used to target Muslims in an unfair way. Muslims can go to prison for ‘thinking badly’ because of the anti-terror laws. This can-not be right and should not be allowed.

Because of the pressure caused by the anti-terrorist laws and the policies that come with them many legitimate views have been targeted. People who support justice for the Palestinians, people who opposed the Iraq war, even people who protested against domestic policies on austerity have been arrested using these laws. Others have stopped expressing their legitimate views out of fear. The anti-terrorism laws have created a police state, and everyone, not just Muslims, are losing and will lose out because of this.

Before 7-7 there had not been a terrorist attack in the UK which featured Muslim perpetrators, yet all the laws enacted before 7-7 targeted almost solely Muslims. The laws of 1997, 2000 and 2001 (as well as the Extradition Act -a treaty with the USA) resulted in deportations, secret trials, deten-tions without charge, police profiling of innocent Muslims, stops at airports and led to more laws that resulted in control orders, the TPIMs we have today and many other injustices. Even before 7-7 there were thousands of arrests of Muslims, nearly all of whom were released without charge. We even had a non-fatal police shooting during an arrest of innocent men. These people were often named in the media when they were arrested but when they were released there was no news coverage. They returned to their lives with stigma and disgrace and were often ostracised by their local and Muslim communities.

These laws not only discriminate against Muslims, they cause discrimination against Muslims and those mistaken to be Muslims. It is not only Muslims who are affected. As a result of such Islamophobia becoming normalised, stereotypes about other minority communities also become normalised. Racism against many minority groups rises as a result.

The impact of the laws

These laws give the impression to everyone, including Muslims, that Muslims are a particular prob-lem that need to be ‘solved’. This is a dangerous way of thinking and it is wrong.

IHRC has been recording and collecting data on discrimination on hate crimes since we started operating in 1997. We have seen a steep rise in the numbers of people reporting Islamophobia.

In 1999, 35% of people we surveyed said they had faced Islamophobia

Our statistics for our hate crime survey in 2010 showed that 14% of Muslims have experienced a form of a hate attack. There are 3 million Muslims in the UK. This means that potentially hun-dreds and thousands of us have been physically attacked.

The idea that Muslims are so bad there have to be separate laws to deal with them can provoke ordinary people to dislike, hate or even attack or want to attack a Muslim or groups of Muslims. This is a result of policies and laws like the anti-terrorism laws which give that impression. This is not just an IHRC idea, or a conspiracy theory. Much research over the years by different academ-ics has shown that most hate crime is carried out by ordinary citizens, not members of far-right groups. Ordinary citizens who don’t have access to minority groups because of where they live, rely on the government and the media for their information. The anti-terrorism laws help give the impression that Muslims deserve to be second class citizens. They also help promote the idea that all Muslims hate non-Muslims and that something must be done about them.

These are some of the main reasons we oppose the anti-terrorism laws. We want criminal acts and atrocities – whoever they are committed by – to be prosecuted using the same criminal laws that we already have. Anti-terrorism laws have just created separate lower standards with which to prosecute Muslims. This is second class justice.

What are we doing then?

We want an end to these laws and will be campaigning with other groups in the coming weeks, months and years to ask for these laws to be scrapped.

We will continue to highlight the shortcomings and counterproductiveness of the laws and their negative impact on Muslims and also everyone else. We will continue to educate and mobilise the communities to call on the government to repeal all these laws.

I invite you to support this campaign in whatever way you can. We know times are difficult and if all you can do is give your moral support and prayers this is enough. We hope you can also help spread the word about this campaign and join the mobilisation.

As always please do send us your thoughts and ideas on this and any other matter.