The Universal Theology of Liberation: Views from Muslim history

Home
Reports and Books
The Universal Theology of Liberation: Views from Muslim history 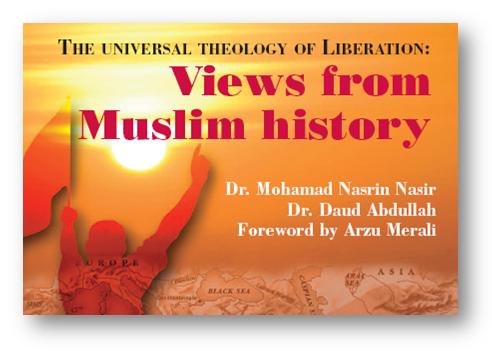 To buy a hard copy, please visit the IHRC on-line shop here.  To download a PDF for UK Pounds 1 only, visit here.

Foreword
As this publication goes to print, revolution is sweeping the Middle East and North Africa.  Millions have taken to the streets in Tunisia to topple its longstanding dictator Zine El Abidine.  A million more have stood in Tahrir Square, Cairo, and hundreds of thousands more have taken to the streets of Alexandria, Suez and all over Egypt in order to bring down Hosni Muabark, and equally hated President.  Jordan, Yemen and Syria have felt the pressure too.
As the oppressors fall, their erstwhile supporters flag up the horror of a possible future for the region, dominated by Islamists.  A poorly informed, structurally biased mainstream media, parrots the line that the involvement of ‘Islam inspired’ groups is a bad thing.  The papers presented here, were first submitted to the seminar ‘The Universal Theology of Liberation: Views from Muslim history, held in July 2009.  Their content bears directly on exactly the current debate regarding – and demonization of – Islamic movements in political and social struggles.

Mohamad Nasrin Nasir looks to North Africa and the example of 19th century mujahid Amir Abdul Kadir’s struggle against the French in Algeria.  He overviews the theoretical works of Professor Saied Reza Ameli, Ali Asghar Engineer, Jalaluddin Al-Afghani to highlight the fusion of faith with political struggle – for the betterment of all.  The term liberation theology was coined in the last century to refer to the theological underpinning of Christian inspired and led struggles for liberation from social and political oppression – from poverty to political disenfranchisement.  What is sometimes forgotten is that these movements, particularly in the South American context identified often with armed struggles or were if not militarised in themselves, were supportive of armed resistance movements.  They were the very epitome of the word ‘radical’ as used today to demean Islamically inspired movements.  This in and of itself is enough reason to view current movements that use the ‘Islam’ label through similar criteria of analysis – be the outcome critical, condemnatory – or as is the case with many peoples in the developing worlds – a congratulatory light.  This does not mean we uncritically accept all who claim the title mujahid as hero, but it also means we can accept that heroes do exist and demand to be understood as fighters for a universal justice and not simply as a cartoonish demon to suit a particularist and chauvinistic vision.

Daud Abdullah’s submission charts a historical track and argues that the resurgence of Islam led political movements in Palestine has a respectable and longstanding history.  Where the Hamas and Islamic Jihad movements have often been targeted for their Islamic identity, Abdullah argues that their role in the political life of Palestine both under occupation and Godwilling under a free state, is intrinsic to its wellbeing.

These papers do not seek to whitewash legitimate questions about the parameters of political and social struggle – they do demand that when judging all political and social struggles, we need to look beyond the easy and lazy stereotypes that have become the norm in our stale political cultures.  They also provide analyses of the positive – they humanise those movements which are ultimately so meaningful to oppressed peoples world-wide and whose humanity demands recognition.
Without such recognition we are all doomed.