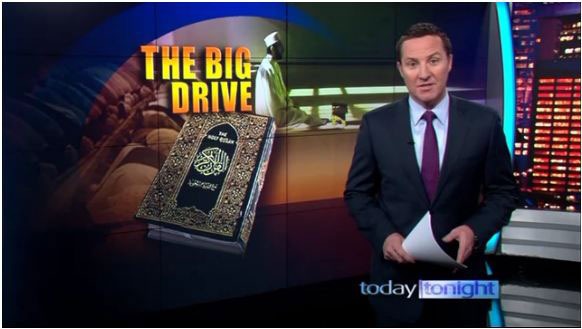 What we found goes beyond a lack of fairness and balance. It is more into the realm of pursuing a deliberate policy of portraying Muslims and Islam in a negative manner.

The current global phenomenon of having an irrational fear of anything and every thing Islamic is without a doubt most prevalent in the mainstream media depiction of Muslims. In fact it has reached such a level that it is now rare to find fair and balanced reporting of issues affecting Islam and Muslims in mainstream Western media.

Even more concerning is that with some media outlets it goes beyond a lack of fairness and into the realm of pursuing a deliberate policy of portraying Muslims and Islam in a negative manner.  A harsh accusation? Perhaps to some, but this can be the only logical conclusion reached when examining the level of deception and distortion that is presented as factual reporting by some media outlets.

In Australia by far the biggest offender on commercial television is without doubt the tabloid current affairs show Today Tonight that screens on the Seven Network.

In one of the latest in a current trend of Islamophobic stories on everything from Halal food to Shariah Law, Today Tonight aired a story on Aug 23 2011 called “The Muslim Recruitment Drive” by reporter Bryan Seymour

Watch it first and then read our own “exclusive report” into the story: Watch Here

Besides the now usual sensationalist, unsubstaniated and ignorant claims that Today Tonight likes to tarnish Australian Muslims with, this story was also an example of lazy and unprofessional journalism.

1 – The Mosque that is actually a Church

Today Tonight  has depicted a Greek Orthodox Church in Belmore (that clearly has a cross showing) as a Mosque. What is even more embarrassing is that the story used footage of the Church and ran audio saying “in a community centre in the suburbs” depicting the venue where Muslims had a meeting.

To add to the embarrassment, they used a still from the video of the Church to promote the story on their website: 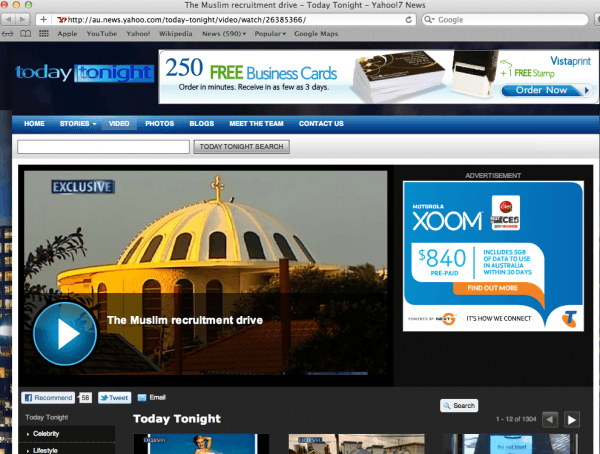 If I was from the congregation of the All Saints Greek Orthodox Church in Belmore, I would be very concerned that my church was being used to host meetings by converts to Islam.

Maybe Today Tonight confused a Church in Belmore with a Mosque in Lakemba. I guess they are both places of worship, they are both in Western Sydney, they are both built from white sandstone bricks. They probably missed the minaret on the Mosque and the Cross on the Church, but hey let us not let facts get in the way of a good story. 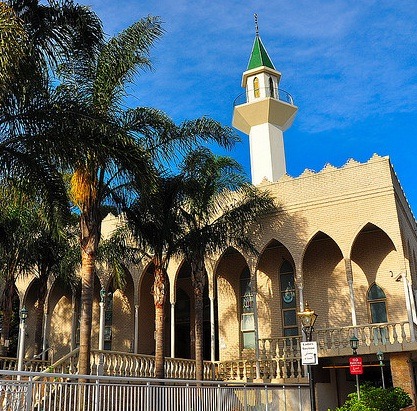 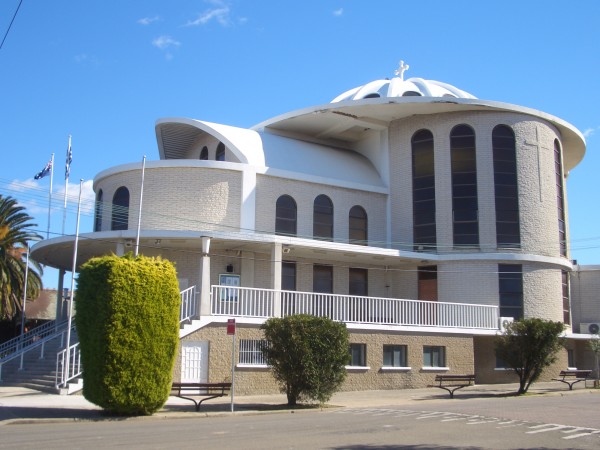 In the introduction to the story Matt White claimed the following:

He then claims that the just completed Census will show that the number of Australian Muslims “has doubled to about 800,000?, without providing any source or reference for his claim

Even if his claim of a doubling in numbers was true, the latest official Australian Bureau of Statistics Census figures for 2006 showed a figure of 340,393 for the number of Australian Muslims. Obviously a doubling of this figure is more than 100,000 less than Matt White’s 800,000.

Matt White then introduces  ”the exclusive report by Bryan Seymour that uncovers the recruitment drive to convert more Australians” and the trend of unsubstantiated claims and falsehoods continues.

The so-called recruitment drive was as already explained incorrectly depicted as having taken place at a Greek Orthodox Church. Besides that, it in fact was not a recruitment drive at all, but according to the Australian New Muslims Association that organised the event, it was an Iftar (or breaking of the fast gathering in Ramadan) that Seymour himself makes mention of later in his report.

After showing some footage of the “recruitment drive”, Seymour claims that “the 2006 Census showed there were 345,000 Muslims” (actual figure is 340,393) and that “Muslim leaders claim that the future could be as high as 600,000?  contradicting the 800,000 claimed by White at the start of the story. Once again no sources or reference are given for the allegations, except some mysterious letter.

Seymour then states that this time around, Muslim Leaders wanted to make sure that this census is different. And says “this is how they are going to do it”.

They then for some reason show footage of an anti-Mubarak rally outside Lakemba Mosque from Feb this year. I know this because it is footage that MuslimVillage.com recorded. You can view the clip here. Today Tonight used a segment from about 2min 50 secs of the clip.

They then take quotes from the letter and claim that these mysterious leaders are calling on Muslims “to tick the box to further their political aims” and “how democracy is just a numbers game”.

We conducted our own research and worked out that “the letter from Muslim leaders” Today Tonight is quoting was taken from an article we published on MuslimVillage.com titled “Australian Muslims encouraged to tick Islam in Census” on Aug 9 2011.

The article was about the 2011 Australian Census and contained a letter from the President of the Australian Federation of Islamic Councils, Ikbal Patel encouraging Muslims to fill in the Census section on religion to properly reflect the true numbers of the Australian Muslim community to ensure the government can take this into account when allocating services to the community at large. At no stage is there a mention of a recruitment drive or a grab for political power. This is clear to anybody that reads the article.

What Today Tonight have done is not only take selected quotes completely out of context to create what can be best described as a “beat up” on Australian Muslims, but they have deliberately not disclosed the source and hidden the context of the letter to enable their claims not to be scrutinised. This is unprofessional and unethical journalism at best.

The inaccuracy continues when they show some interview footage of a ex-Muslim by the name of Maryam Namazie, stating that she escaped from Iran. These claims might be true, but I am not sure why Today Tonight then choose to show what is clearly footage of Afghanistan, not Iran when referring to her escape. I guess if a Church can become a Mosque, why can’t Afghanistan become Iran?

5 – Islamophobes and further out of context quotes

Although I won’t go into in-depth details, during the story Seymour claims that although Sheikh Shady Al Suleiman spoke about “love and acceptance” at the iftar, he was then shocked to listen to his sermons given at Lakemba Mosque (which Today Tonight played a section of). Sheikh Shady informed me that his quotes were taken completely out of context and failed to mention the many rights that a wife has over a husband in the sermon Today Tonight showed.

It is also interesting to note why Today Tonight chose to use a British based ex-Muslim Maryam Namazie and the known IslamophobeCory Bernardi, as some sort of expert commentators on Australian Muslims.

As an Australian and a Muslim, like everyone else in our community I am fed up with shock jocks and tabloid media like Today Tonight depicting our community in a negative, stereotypical and sensationalist manner. Most of the stories that are run about Muslims are far too often either huge distortions of the truth or just out right lies, as in this story. From a professional point of view, they are also amateurish and showed sloppy “journalism”.

Is it any wonder with all this blatant Islamophobic depiction of Muslims that many believe that the war on terror is in reality a war on Islam – the argument being that the mainstream media is being used in the ideological battle for the hearts and minds as a support for the physical battle of war.

One would hope that in the wake of the recent investigations into the behaviour of certain sections of the media in Britain and soon Australia, that journalists will begin to lift their game. Perhaps it won’t change their modus operandi, but hopefully it will at least show some of them up as the unethical and unprofessional “journalists” they have become.