‘The Muslims are Coming’ with Arun Kundnani

Home
Events
‘The Muslims are Coming’ with Arun Kundnani 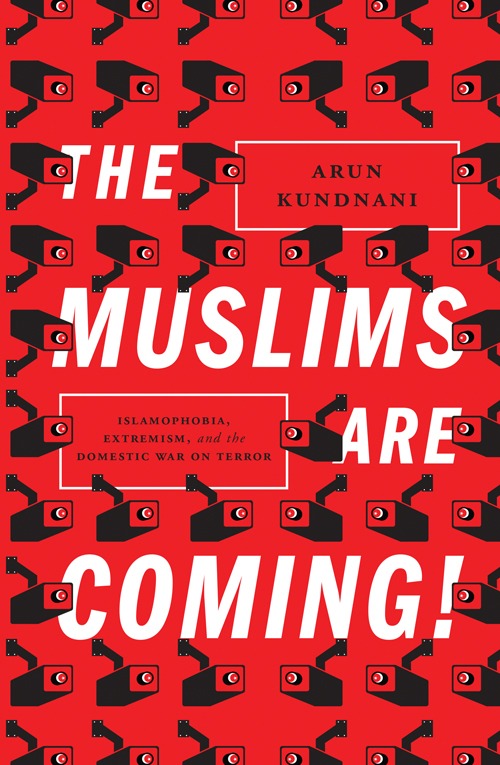 Kundnani joins us to talk about his new book ‘The Muslims are Coming: Islamophobia, Extremism and the Domestic War on Terror’.

If you want to be part of the studio audience please email events@ihrc.org (please arrive by 6.15pm)

More about the book

The first comprehensive critique of the War on Terror’s new front – the specter of domestic terrorists.

Death came instantly to Imam Luqman, as four FBI agents fired semiautomatic rifles at him from a few feet away. Another sixty officers surrounded the building on that October morning, which followed a two-year undercover investigation that had infiltrated the imam’s Detroit mosque. The FBI quickly claimed that Luqman Abdullah was “the leader of a domestic terrorist group.” And yet, caught on tape, he had refused to help “do something” violent, as it might injure innocents, and no terrorism charges were ever lodged against him. For three decades, the black preacher, born Christopher Thomas, had ministered to Detroit’s west-side poor while espousing ‘60s-style radicalism. Unfortunately for him, in the post-9/11 world, he became one of the faces of the new enemy among us.

Jameel Scott thought he was exercising his rights when he went to challenge an Israeli official’s lecture at Manchester University. But the 17-year-old’s appearance at the protest with fellow socialists led to two years of surveillance by the police, as part of Britain’s Preventing Violent Extremism program. Counter-terrorism agents visited his parents, his relatives, his school. They asked him for names of other activists, and told him not to attend demonstrations. They had his school bar him from a trip to a Conservative Party conference. They called his mother and told her to move the family to another neighborhood. Although he doesn’t identify as Muslim, Jameel had also become a face of the new homegrown terrorist.

Following the killing of Osama bin Laden, polls showed that the public was more anxious about terrorism after his death than before. The new front in the War on Terror became the “homegrown enemy,” domestic terrorists who are the focus of sprawling counterterrorism structures of policing and surveillance in the United States and across Europe. Undercover officers and informants have spied on 30 mosques in New York alone. Surveillance has grown explosively—at least 100,000 Muslims in America have been secretly investigated in recent years—and in incredible detail—counter-terrorism agents have a file on every Moroccan taxi driver in New York City. British police compiled a secret suspect list of more than 8,000 al-Qaeda “sympathizers”, and included almost 300 children 15 and under on its list of suspected extremists, while MI5 doubled in size in just five years.

Based on several years of research and reportage from Texas and New York to Yorkshire, and written in engrossing, precise prose, this is the first comprehensive critique of counter-radicalization strategies. The new policy and policing campaigns have been backed by an anti-extremism industry of newly minted experts, and by examining the ideas of even liberal commentators like Martin Amis, Paul Berman, and Timothy Garton Ash, the book also looks at the way these debates have been transformed by the embrace of a narrowly configured and ill-conceived anti-extremism.

Pre-order from the IHRC Bookshop.

“An important and moving investigation of the costs of the ‘war on terror’ for those who have been its targets, including the thousands of innocent Muslims who have been infiltrated, entrapped, and surveilled in the search for the radicalized terrorist among us. Kundnani gives eloquent voice to the communities that have been regulated, watched, and silenced by the national security state.”
David Cole, author of Enemy Aliens: Double Standards and Constitutional Freedoms in the War on Terrorism

“A bold new look at the much discussed issue of surveillance, documenting how it impacts the communities most affected—American and British Muslims. With incisive reporting from across the US and the UK, combined with trenchant analysis, Arun Kundnani captures what it feels like to be a ‘suspect population.”
Deepa Kumar, author of Islamophobia and the Politics of Empire

“This timely and urgent analysis carefully examines the ideologies and law enforcement strategies that undergird the domestic War on Terror. What Kundnani finds is disturbing: sweeping, specious radicalization theory and racialized assumptions about the nature of Islam drive domestic counterterrorism practices. This has had devastating consequences for the rights and liberties of Muslims and the state of constitutional protections in the US and UK.”
Jeanne Theoharis, author of The Rebellious Life of Mrs. Rosa Parks

“An incisive, scholarly, bold, and convincing critique of the never-ending ‘War on Terror,’ whose roots extend far beyond the tragedy of 9/11. An important work.”
Wajahat Ali, cohost of Al Jazeera America’s The Stream and author of The Domestic Crusaders

“Indispensable and powerful … Essential reading for government officials engaged in designing our counterterrorism policies, as well as readers trying to make sense of them.”
Faiza Patel, Co-director of the Liberty and National Security Program, Brennan Center, NYU School of Law

“A must-read guide to the second decade of war waged on the home front.”
John Feffer, author of Crusade 2.0: The West’s Resurgent War on Islam

“An able, engaging dissection of the glib, if popular, ‘radicalization’ thesis that holds Muslim terrorism primarily to stem from religious and/or ideological fervor. Far the most common motivation, Kundnani forcefully demonstrates, is outrage at Western foreign policy in the Middle East.”
John Mueller, Ohio State University and Cato Institute