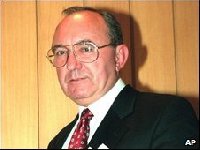 Mr Goldstone said he was “disappointed” Israel had given no positive response, and said his team would enter Gaza via Egypt if Israel refused them visas.

The UN wants to investigate whether Israel and Hamas committed war crimes during the January conflict in Gaza.

Israel accuses the UN branch carrying out the mission of bias against it.

The UN Human Rights Council has been accused of singling out Israel unfairly, and is viewed by some as having less credibility than other parts of the UN.

But correspondents say the selection of Mr Goldstone, a respected South African war crimes prosecutor who is also Jewish, as head of the inquiry has given it greater clout.

Mr Goldstone said his team had hoped to visit southern Israeli towns which have suffered Palestinian rocket fire , before entering Gaza from Israel.

But if Israel failed to allow the investigators passage, entering through the Rafah crossing on the Egypt-Gaza border would be a “second choice”.

He said that after talks with UN Secretary General Ban Ki-moon, the team had decided to hold a series of public hearings.

If these could take place in the Middle East “so much the better”, but if not they would be held in Geneva, with witnesses flown in or testifying via video link, he said.

Most Palestinians in the Gaza Strip are unable to leave because of Israel’s blockade on the territory.

Israel has given no official response to the inquiry team, but media reports have suggested it does not plan to co-operate.

Israeli ambassador in Geneva Leshno Yaar told Associated Press earlier that the council treats Israel “unfairly” and that “justice cannot be the outcome of this mission”.

Several investigations into alleged violations of international law during Israel’s 22-day operation in Gaza, which ended on 18 January, have now reported back.

Mr Ban has requested more than $11m (£7m) compensation from Israel for damage to UN property in Gaza, after a limited UN inquiry accused Israel of targeting known civilian shelters and providing untrue statements to justify actions in which civilians were killed.

Meanwhile, a fact-finding team commissioned by the Arab League said there was sufficient evidence for the Israeli military to be prosecuted for war crimes and crimes against humanity, and that “the Israeli political leadership was also responsible for such crimes”.

About 1,300 Palestinians died in the January conflict. Israeli and Palestinian estimates differ on the numbers of civilian casualties.