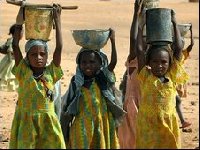 Ban Ki-moon said the decision could cause “irrevocable damage” to the humanitarian operations in Sudan.

A statement from Mr Ban’s office said the decision to expel 13 non-governmental organisations “will, if implemented, cause irrevocable damage to humanitarian operations there”.

“The operations of these agencies are key to maintaining a lifeline to 4.7m Sudanese people who receive aid in Darfur,” it said.

“The confiscation of equipment, money and other materials is unacceptable and must end immediately,” it said, while stressing that the agencies involved affected had acted “in a neutral and impartial manner”.

“We support 50,000 children, trying to protect them from abuse, from physical and sexual violence, trying to get them back into school,” she said.

“These are very traumatised children, many of them, and it’s essential that Save the Children UK and other aid organisations are able to deliver essential aid to communities, otherwise life is going to get even worse for them.

“Our job now is to make sure that we appeal against that request and that we stay to support the children that we’re looking after across the country.”

“We are delivering mainly water and sanitation to 600,000 people,” said Mr McDonald.

“The people of Darfur have suffered terrible violence. They are living in camps in pretty desperate conditions. If we are forced to leave, people will have to go without water, sanitation, food medicine… lots of vital services.”

Abdalmahmood Abdalhaleem Mohamed, Sudan’s ambassador at the UN, said the country would “deal very clearly with any organisation that is violating the hospitality of the country”.

Sudan’s deputy permanent representative to the AU, Akuei Bona Malwal, told the BBC that the agencies had been “deemed to have worked beyond the permit that was given to them”.

He said it was a “coincidence” that the agencies had been expelled on the same day as the ICC issued the warrant.

Vanessa Van Schoor, Medecin Sans Frontieres’ operation manager in Sudan, said that while she could not say whether the expulsion were directly connected to the ICC’s announcement, the order to leave came within half an hour of the ICC’s news conference.

Ms Van Schoor denied that MSF staff were in Sudan for anything other than medical purposes, and said the agency had always worked in “full transparency” with the Sudanese government.

“Yet for some reason, they’ve chosen to throw us out of the country,” she said.

“We’re lost. We don’t understand how this political judicial process has meant that delivery of food, healthcare and water supply is put in jeopardy.”