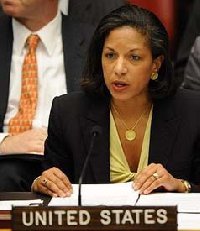 UNITED NATIONS, N.Y. – The United States won a seat on the United Nations’ top human rights organization Tuesday, closing out another vestige of the Bush administration’s confrontational relationship with the world body.

But the US election to the 47-seat Human Rights Council was overshadowed by the election of several countries – including Cuba, Saudi Arabia, Cameroon, and China – that human rights organizations often cite as violators of their own citizens’ rights.

As a result, Tuesday’s vote in the UN General Assembly added fuel to a debate – percolating since the Obama administration announced in March its intentions to reverse Bush policy and seek a seat on the council – over whether human rights can be advanced by a body that is willing to seat rights violators.

The US ambassador to the UN, Susan Rice, hailed the return to the human rights forum as part of America’s determination “to again play a meaningful leadership role in multilateral organizations.” The US will not wait for a 2011 review of the council to try to reform it, she added, but “will be working very hard from an early stage to try to support the strengthening and improvement of this body.”

The General Assembly vote on the council’s membership was largely a foregone conclusion, with only two competitive races out of 18 open seats. Azerbaijan lost its bid for membership from the Eastern Europe group, and Kenya lost from the Africa group.

The US candidacy was the focus of the day, with human rights advocates divided over America’s return to what is widely seen as a flawed institution.

The purist view – that sitting on a body whose members include rights violators does not serve the cause of human rights – was voiced by prominent rights advocates such as Vaclav Havel, leader of the Czech Velvet Revolution and a former president of the Czech Republic.

The Obama administration took the other side in the debate: that rights improvements and institutional reforms will be best achieved from inside the council. Many international human rights groups and experts in global institutions endorsed that position.

“The administration is taking the right decision here – with the proviso that we will use this new position to speak out forcefully against the abuses we see taking place,” says Michael Doyle, an expert in UN institutions at Columbia University in New York and a former UN official. “Our participation on the council does not per se legitimate bad behavior if we are acting on the inside to fight it.”

Others counter that a US presence on the council could actually set back the cause of human rights.

“Washington’s decision lends a veneer of respectability to a discredited body that does not deserve to be recognized as an organization that advances human rights,” says Nile Gardiner, an analyst of international institutions at the Heritage Foundation in Washington. “The Obama administration is living in a fantasy world if it thinks this council can be reformed.”

MUCH ATTENTION TO ISRAEL

Created in 2006 as part of an ambitious but ultimately limited reform of the UN, the Human Rights Council replaced the discredited Human Rights Commission, which had become known as a dictators’ club.

Council supporters say the relatively new body, while not perfect, has held 10 special sessions on human rights cases such as Myanmar (Burma), Darfur, the Democratic Republic of Congo, and the West Bank and Gaza.

Critics counter that the Islamic-heavy body – 26 of the 47 geographically allocated seats are from Asia and Africa – focuses too much on Israel and issues like Islamophobia in the West.

They note, for example, that half of the special sessions that supporters cite as evidence of the council’s positive work were focused on Israel.

The council did open a special session on Darfur, but its results were disregarded, they insist, and a team of experts created to scrutinize Sudan and the Darfur region was disbanded.

Anne Bayefsky of EyeontheUN.org, a UN watchdog group, says the “real story” of Tuesday’s vote is that Kenya was defeated in the Africa group, assuring the Organization of the Islamic Conference’s “hold on the balance of power” in the council.

Others, like Mr. Havel, say the council’s undemocratic election rules offer a poor example to young countries and assure “tyrants” a legitimizing forum. Human Rights Watch welcomed the US return to the human rights body, but Steve Crawshaw, the group’s UN advocacy director, said its was marred by the fact the US was elected “from a noncompetitive slate.”

ABUSERS ON THE COUNCIL?

Council members are chosen from regional slates that are generally agreed to before the membership vote. In Tuesday’s election, 20 candidates vied for 18 seats, and even the Western countries offered only three candidates for three open seats.

A recent report by Freedom House and Human Rights Watch found that one-third of the council candidates should have been disqualified over their human rights records.

But some council sympathizers also say that criticism of the body is largely concentrated in the West and reflects a decades-old fault line between wealthy and developing worlds. Western nations take seven of the council’s seats; Asia and Africa each have 13.

A key test of the Obama’s administration’s decision “to work from inside rather than sulking outside the tent” will be how quickly the US presses for council reform, says Columbia University’s Mr. Doyle. Echoing Ambassador Rice’s pledge, he says, “They don’t have to wait for the 2011 review to try to press for real improvement.”