We Are On The Streets 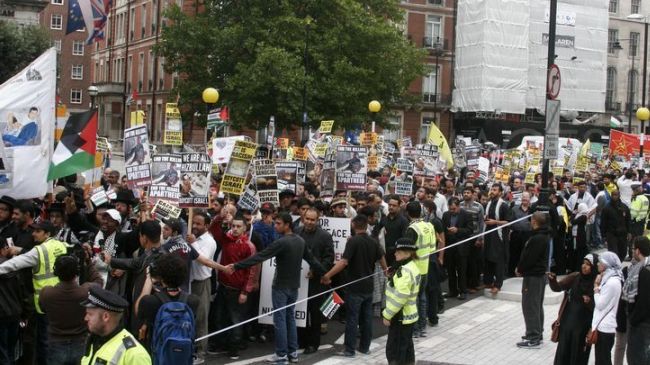 We are a people who have fought against Apartheid and can remember the days and nights when Caspirs and riot police cut off our neighbourhoods by strategically parking at a major interaction of a bridge. One of the worst incidents was the Trojan horse attack where children in Thornton Road were brutally killed. The soldiers were close by.

However we did not have our areas bombed from the air with helicopter gunships, from the sea with warships and from land by tanks. When an activist was arrested the Apartheid police did not give the family ten minutes before the house was demolished. Yes we had checkpoints but they were not ever-present. In the occupied territories there are checkpoints as part of the daily humiliation and economic sabotage of the Palestinians. Trucks with fresh vegetables will be kept waiting at a checkpoint for long enough for the vegetables and fruit to be rotten. A wall cuts off families from their land and from one another. A journey that should take five minutes down the road takes a whole day because of checkpoints, Apartheid roads reserved for only one people and completely denied to another people. Leaders of a people under occupation are subject to assassination, even if they are in wheelchairs. We did not experience this level of inhumanity under Apartheid. We were evicted from District Six and Sophia Town for example to “ethnically cleanse” the cities under Apartheid. In 1948, 349 villages were ethnically cleaned. The occupation, expropriation and displacement of Palestinians took place from before the State of Israel was established especially since they were given the green light by the very states, which gave it a forged birth certificate. We who have lived under Apartheid know of the unequal allocations for social welfare, health and education. That is the case inside Israel today. The Christians of the village of Ikrit have been unable to return to their home village since 1948 from which they were expelled by Irgun terrorists. They are internally displaced because their return would provide a legal basis for the right of return of the refugees who now live in refugee camps in places like Gaza, Lebanon, Jordan and Syria.

These are issues that are well known to almost everyone. Those who support Israel and those who support the Palestinians all know these facts. The interpretations might differ but the facts are indisputable. Why are we on the streets? Why are we marching on Quds Day when Israel, its big power, mainstream media and sectarian Muslim apologists have actively discouraged people from coming out onto the street. This message is directed at those of us who look at this carnage in Palestine and choose to not remain be indifferent. In Europe any criticism of Israel is dismissed as anti-Semitic. If one were to venture criticism it must be ritualistically involve the right of Israel to live in peace and security and for Palestinians to accept the Jewish state’s right to exist. We are on the street because we refuse to play this deadly game. It is not Israel that is at risk but the Palestinians need protection from Israeli hatred. This march and its message is about us and is directed at us. There are political parties, businesses and NGOs who provide unqualified support for Israel irrespective of the dripping blood from the hands of the sons and daughter of Cain. Those who have joined this and previous Quds Day marches should be pleased with themselves for no other reason but they have chosen to take a stand for that which is right. They, yes we have taken to the streets to say that we do care that children, women, elderly people and even activists are killed for no other reason other than the fact that they refuse to surrender. We are on the streets because we remember every mother who carries the keys and documents of ownership to a house demolished long ago. We are on the streets because we fight for the right of return of refugees in every place on earth where there has been conflict and we are on the streets to say that Palestinians have the same right. To the Zionists of Sderot we say we are on the streets to bear witness that the people from Gaza, whom you are now bombing lived in Sderot and they protected you from the British. The British punished them with expulsion to Gaza and instead of repaying them with an embrace and a smile you bomb them. We are on the streets because there is a history and a context to this conflict.

To the sectarians we say that even when you served Apartheid government and Zionist interests by physically attacking us and we had the means to take you out in the days of Apartheid, we did not raise a finger against you because we knew who our enemy was and is. The doors of our hearts will always be open to those who repent and make amends. Yes, we will always find our ways to the streets. To those who make deals with Zionists we say we are on the streets because with us what you see is what you get. Once you have made your un-mandated deals with the Zionists then you are in their pockets no matter what you say. Look at parts of the Palestinian land Arab leaderships flapping in the wind because the Zionists are grabbing them by the proverbials. We are on the streets because we do not put increasing and ever-changing pre-conditions for unity amongst oppressed peoples. Yes one cannot be on the streets and also in the smoke-filled room.

Moosa Arendt is a grassroots social movements activist and writer, who has lived on four continents. He provides and alternative and often humorous take on current affairs.