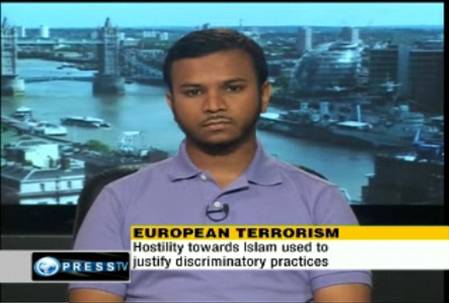 Press TV talks with Ahmed Uddin, spokesperson from the Islamic Human Rights Commission from London who highlights the reality of the low level of involvement of Muslims in terrorist acts and the unbalanced intensive push by Western media and governments to perceive all Muslims as potential terrorists. The transcript of the interview follows after the video.

Press TV: Almost all of the news comes from wires from for example APTN, Reuters, AFB etc – Looking at some of the terms used such as Islamist attacks, moderate Islam, radical Islam, or jihadists are just some of the labels used – Isn’t this how peoples’ psyche in the first place has been shaped and minds condition? One day after the terrorist attack in Norway, British newspaper The Sun headlined “Al-Qaeda massacre Norway’s 9/11.” In the text it writes “…the gun maniac was blond with blue eyes and spoke Norwegian – raising fears that he was a homegrown al-Qaeda convert” – associating it with al-Qaeda. What is your response to that?

Uddin: You would think that after the scandal that’s happened in the Rupert Murdoch’s media empire that they would learn their lesson not to jump to conclusions. You have shown one of the headlines putting the blame on Muslims. What the media has essentially done is that any acts of terrorism, of violence that takes place people are automatically assuming it was done by Muslims.

Even Muslims themselves are so scared that if an act of terrorism has taken place, they are thinking, please please let this not be a Muslim act – because they know as soon as this act is carried out and it is blamed on the Muslims new government legislation will come through and discriminate against the whole community and label them as potential terrorists.

The irony is that if you look up European statistics in 2006 for example out of 500 terrorist attacks only one of them was labeled Islamist. In 2007 and 600 terrorist attacks, only four of them were classed as carried out by Islamist, which is less than one percent of the figure. And the media seems to be using that as a means to discriminate against the Muslims.

Recently, we carried out a hate crime questionnaire at the Islamic Human Rights Commission and we found from the statistics that 70% of respondents feel that the media is negatively stereotyping Muslims.

Press TV: (Sound bite played of Glen Beck – right wing Fox News talk show host – saying Muslims are squeezing the neck and overrunning Europe quoting and agreeing with Geert Wilders who says political correctness and multiculturalism is killing Europe). Tell us your reaction and ultimately who is more dangerous? What are the consequences of a personality coming out with statements like that?

They forget that when Europe was in a crisis when they needed migrant workers they conveniently allowed Muslims to come into the country and work hard to build up the very nations that they live in today – Now they don’t need them; they want to get rid of them.

The perpetrator of the terrorist act in Norway, not only has he carried out a terrorist attack, but it is a clear signal to groups like the EDL and Stop the Islamification of Europe saying that “We are with you. Carry out these acts.”

And it’s also giving encouragement to these politicians who are on the far right to be discriminatory toward Muslims and we’ve seen this in various European nations. It has become the norm to pick on issues of the hijab and other issues of Islam.