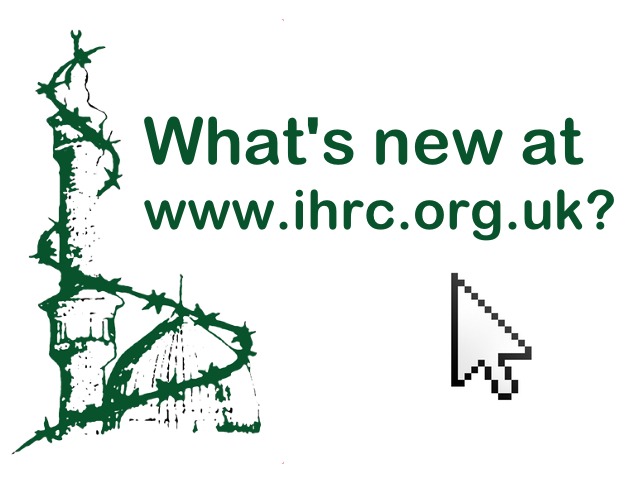 It has been an incredibly busy week at IHRC, after the violent events that took place in Woolwich, UK, we have been inundated with calls coming in from various parts of the country with Muslims reporting Islamophobic attacks.

We have issued a press release, as well as some guidelines on how to be safe in these troubled times and to report incidents to the authorities, as well as ourselves when they take place. You can find the guidelines below.

This week also marks the launch of our highly acclaimed report on Anti-Muslim discrimination and hate crime in the USA. The report is now available for purchase, and you can find out more about that below.

If you would like to donate to IHRC please contact the office on +44 20 8904 4222 or info@ihrc.org or download a copy of our latest newsletter and fill in one of the donation forms and return to us

Or donate online by visiting here

An anti-Muslim backlash in the wake of events in Woolwich is already in evidence. As such, IHRC reissues its advice for safety and security of Muslims and those perceived to be Muslim.

If you do experience an attack or assault, please report it to the police and to IHRC or an appropriate agency.

Read some of our precautionary measures here. Please distribute to your contacts.

In recent years, Israel has abducted arrested Palestinian national team players and subjected them to severe torture. Zakaria Issa who was detained in Al Ramla prison, died soon after his release due to medical neglect during his incarceration.

Following Israel’s destruction of the Rafah National Stadium during its merciless and indiscriminate attack on Gaza in 2008-2009, European footballers signed a letter led by Frederic Kanouté declaring the holding of the competition in Israel unacceptable.

IHRC, Innovative Minds, MPs, trade unions and activists from all across Europe joined forces with the Red Card Israeli Racism campaign in a rally on 24 May 2013 to tell UEFA at its Annual Congress that Israel must not be allowed to host the European Under-21 finals.

Visit the link here to obtain some sample letters that you can send to UEFA to write in protest.

Offers on IHRC and other Publications on the USA

As IHRC launches its seminal report on anti-Muslim discrimination and hate crime in the USA this week, the IHRC Bookshop (in-store and on-line is running a number of offers).

IHRC has written to the Commissioner of the Metropolitan police, Commissioner Sir Bernard Hogan-Howe, asking to be assured that the police are being vigilant and will prosecute anyone that incites murder or hatred following the Woolwich attack. You can read our press release by visiting the link here.

A staggering 30% of Muslims interviewed have experienced a hate-motivated physical attack according to a ground breaking report by IHRC that looks at Anti-Muslim experiences in the USA.

The report also shows that 88% of those interviewed reported negative experiences in everyday life, media, political discourse and policy. The report shows that although the United States is perceived as a model for religious freedom and tolerance, our research indicates otherwise. Read more here.

IHRC is excited and honoured to have Professor Sohail Daulatzai join us to talk about his new book.

Black Star, Crescent Moon: The Muslim International and Black Freedom beyond America traces the interactions between the Black radical imagination and the Muslim Third World from the 1950s to the present.

We are delighted to launch Katy P. Sian’s courageous book that challenges racialised communities to critically look at their conceptualisations of each other.

Once Upon a Hatred: Anti-Muslim Experiences in the USA reveals the shocking statistic that 30% of Muslims surveyed have experienced a hate-motivated physical attack.  This stark figure is one of many statistics gleaned from a 1200 person survey undertaken in 2012 by IHRC, in California.

The publication is out now and is on sale for £10. Find out more here.

Author Victoria Brittain joined us for an author evening on 1 May 2013.

Shadow Lives reveals the unseen side of the ‘9/11 wars’: their impact on the wives and families of men incarcerated in Guantanamo, or in prison or under house arrest in Britain and the US.

Arzu Merali argues that structural racism is the elephant in the room.  Read her blog post here.

Malcolm X (Long sleeve) T-Shirt:  Truth is on the side of the Oppressed

This book traces the interactions between the Black radical imagination and the Muslim Third World from the 1950s to the present..

Don’t forget to join us live on IHRC TV (www.ihrc.tv) on 5 June when Sohail Daulatzai will join us at the IHRC Bookshop to talk about his book.
This book is on for a special reduced price of £19.40 until 9 June.  If you would like us to have your copy signed by the author please add a note when ordering (delivery after 6 June 2013).

This pack covers includes a book and essays on the issues of the enslavement of African Muslims, the USA as an extraordinary Empire, the predicted decline of America and the current economic crisis.

Additionally, we have short pamphlet from Malcolm X, entitled ‘Why I am not an American’.