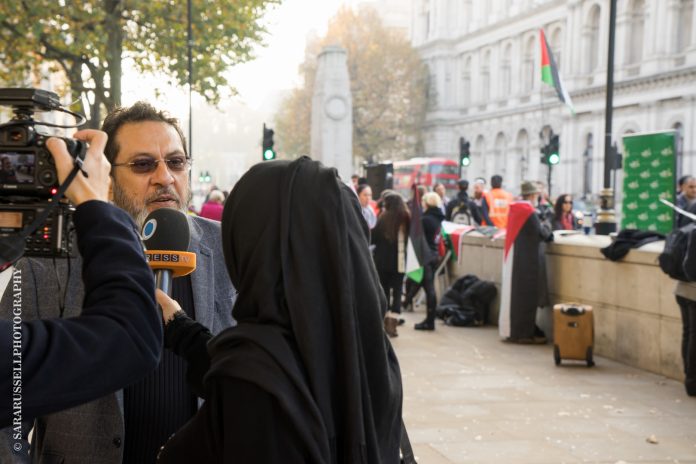 Dignity Day was a moment where oppressed groups asserted their dignity in the face of oppressive power.

Watch video clips of the event below, and read a full report and see photos underneath. 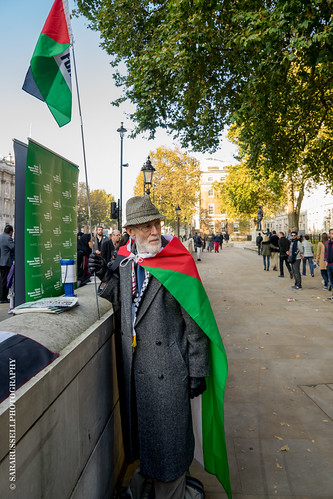 On 1 November 2015 IHRC organised a rally outside 10 Downing Street in commemoration of Global Dignity Day. The event was a chance for galvanised protesters – numbering over a hundred – to come together and demand that their dignity be respected. The day sought to criticise oppressive structures like the government and media; racism, austerity, increased militarisation and all other forms of discrimination and inequality.

Rob Ferguson – from the National Union of Teachers – spoke. He spoke of the conflict faced within his own profession as a teacher. The Prevent Strategy and the Chanel programme both demonise Muslims and force innocent people into situations where they cannot speak lest they fall under suspicion of terrorist activity. He also mentioned the recent release of Shaker Aamer who had been detained in Guantanamo for a number of years. He concluded by saying that it is necessary to not only speak out against detrimental laws and policies, but to also come together to build collective resistance.

We were also fortunate to hear from Damien Read from the London Visual Activist Collective as he made clear the plight of the Palestinians who are constantly being deprived of their dignity when their mosques are being defecated in and destroyed. Hearing his speech really put the global struggle for justice into perspective.

Finally, the day concluded with a speech from IHRC Chair Massoud Shadjareh who made clear the importance of asserting our own dignity. It cannot be taken away from us. Today’s UK government constantly tries to undermine dignity through its counter-terrorism measures and austerity laws. It is extremist in its own right but we must not kowtow to them.

The rally was well-attended by people from across the UK; this despite a morning beset by fog and mist.

Throughout the day Nazim Ali also read aloud messages from key figures on the subject of dignity and humanity. Please see them below:

When I hear the word dignity I immediately think of confidence, courage, and character. A person who has dignity is one who cannot be subdued psychologically. He stands up for what he believes in and stands tall for that matter. A person of dignity radiates with a core locus of principles and values. It is from this core that a persona exudes the air of dignity. Dignity is more obvious in people who enjoy particular freedoms but it is not limited to them. A slave — even though he does not have the virtue of civic freedom — but if he is a person of dignity he demonstrates that dignity in the looks of his eyes, in the features of his face, and in the movements of his body. There is something about a person of dignity that can be detected by others who share that dignity. Dignity transcends the ethnic, the racial, the sectarian, and the class status of people. You will find dignity in people who are white, people who are black, people who are oriental; you will find it in people who are rich and people who are poor, who will find it in intellectuals and in illiterates. You will find dignity wherever principles and values of truth and justice coalesce. You can’t break a person of dignity because dignity possesses him and he does not possess it.

–Imam Muhammad al Asi was the former imam at the Islamic Centre of Washington and he is the author of the first-ever tafseer of the Qur’an – titled: The Ascendant Qur’an- written directly in the English Language.

What DIGNITY means to me, the nourishing of positive action with unconditional love and compassion for humankind and feeling good about ones inner self in spite of the many obstacles that one may be confronted with related to life’s journey therefore DIGNITY is a constructive mind set of encouragement for self determination.

I wish to thank and congratulate the organisers of Dignity Day for highlighting the violation of human dignity throughout the world. Human dignity is God-given, a manifestation of His love and mercy, and any attack on it must be individually and collectively resisted. It is an inherent right which must be protected and defended.

Today, hundreds of millions of people’s dignity is under assault. They are subject to degrading poverty, cruel torture, oppression and denial of basic human rights. Over 1 billion people are mired in poverty, living below the poverty line. Millions live in slums without jobs, adequate housing, basic education and healthcare. 22,000 children die every day due to poverty.

The gap between the rich and poor is widening. The richest 10% of the world’s population owns 87% of the global wealth. Poverty and inequality are rooted in the global economic system which is controlled by less than 200 large and powerful multinational corporations. Alleviating poverty and restoring dignity to millions will require eliminating the power of this tiny minority.

Racism and Islamophobia are spreading like cancer, particularly in the so-called Western democracies. Women are being humiliated, insulted and punished just because they choose to dress according to their religious beliefs. Muslims and Afro-Americans in the United States are subject to police racial profiling and unwarranted body searches. One in three black men can expect to go to prison in their lifetime.

Israel has instituted an apartheid regime in Palestine in gross violation of international law and the United Nations Charter. Palestinians are arrested and detained arbitrarily, and subject to collective punishment reminiscent of Nazi Germany. Their freedom of movement is restricted and subject to humiliating treatment at check-points. Gaza will become unlivable in a few years unless the Israeli embargo is lifted.

Millions of people have become destitute, lost their homes and loved ones, and living in refugee camps as a result of the conflicts and chaos in West Asia. The imperialist powers instigated these conflicts in order to perpetuate their control over the resources in that region. Arab dictators and hereditary rulers have colluded with them to suppress the movements for freedom and justice in their countries. They have imprisoned and tortured thousands of their citizens who cry for freedom and justice.

Resistance to the imperialist powers, dictators and hereditary rulers is the only way the oppressed people can regain their dignity, freedom and justice. I hope and pray that this rally will give added momentum to the oppressed people’s struggle to create a better and just world.

IN THE NAME OF ALLAH THE BENEFICENT, THE MERCIFUL. PEACE AND BLESSINGS ON THE PROPHET MUHAMMAD AND HIS HOLY PROGENIES.

Allah the Exalted, Has created man a dignified being. He has designed for man a dignified and everlasting life in the Hereafter. He has however ordained that those who will achieve the blissful, truly dignified and everlasting life are those who live their lives in dignity here in this mundane world. To achieve this, one has to discover himself and know his worth. He has to be a truly free being.

Man must know that he has been created by Allah and placed on this planet for the purpose of acting as the vicegerent of Allah on earth. This means subduing your will to that of your creator. Only when man does this can he be truly free from subservience to other beings and be true servant of Allah and therefore fulfil the purpose of his creation .

One who is able to achieve this will therefore be ready to sacrifice everything he owns and even his life to live in dignity here and gain the everlasting dignity. Attached is Mahmoud’s profile statement. He was only 19years at the time of his matyrdom, but was ready to defend his dignity by paying with his life.

-ZEENAH IBRAHEEM is one of the leading women in the Muslim Brotherhood Islamic Movement in Nigeria. At the Al Quds Day march in Ramadan of 2013in Zaria, Nigeria, protestors were attacked by a section of the army whereby one of her sons’ leg was badly injured, another son was immediately killed and two of her other sons were abducted and tortured to death.

The dignity of human beings cannot be conferred on them by other human beings. It is an innate existential condition that accompanies them from the moment of conception. That is, from the union of male and female cells when it forms the zygote. The fact that a specific zygote did not exist before nor will a similar or the same zygote exist afterwards confers its status as being absolutely unique.

To acknowledge, respect, promote and uphold the dignity of the human beings are the obligations which all human beings have towards each other. There are no exceptions. That in essence is the concept of social justice. At no stage and under no circumstances can philanthropy become a substitute for social justice.

“So set thou thy face steadily and truly to the faith: (establish) Allah’s handiwork according to the pattern on which He has made mankind; no change (let there be) in the work by Allah: that is the standard religion: but most among mankind understand not.” [Qur’an 30: 30]