Acts of sacrilege, rape, torture and murder in Bahrain 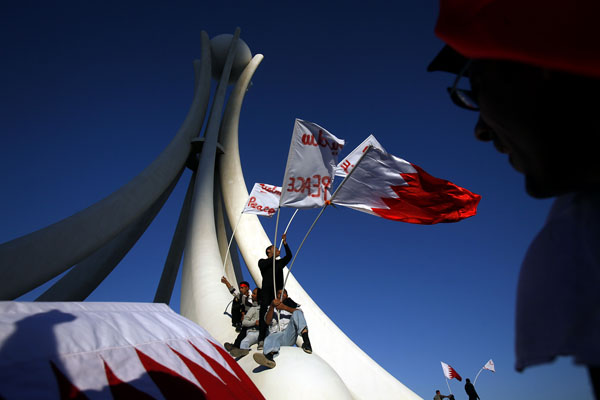 Bahraini security forces backed by Saudi troops and their masters in Washington have and continue to perpetrate indescribable crimes against innocent civilians in Bahrain. Those targeted include not only peaceful protesters, but also doctors and nurses treating the injured in hospitals. Poets, teachers and university professors and their family members have also been targeted. The impunity with which Bahraini forces are attacking civilians and the crimes they are committing clearly point to deep collusion with the regimes in Saudi Arabia and the US. The Americans and their allies have gone ballistic over Colonel Muammar Qaddafi’s attacks on protesters in Libya and have sent planes and drones to attack and destroy his installations but are deafeningly silent about well-documented crimes against innocent civilians perpetrated by the unelected minority Bahraini regime.

Saudi troops rushed to Bahrain on March 13 have indulged in wanton acts of vandalism and sacrilege. Masjids have been attacked and destroyed and copies of the Qur’an trampled upon. Muslims rightly take great offense at disrespect to the noble Qur’an as has been witnessed in the case of the extremist American Christian pastor, Terry Jones in Florida whose act of sacrilege has been condemned worldwide. Yet there is near total silence about the Saudis’ acts of sacrilege and desecrations in Bahrain.

Since the invasion of Bahrain by 1,000 Saudi troops (and 1,000 Emirati troops) backed by armored personnel carriers and tanks, they have indulged in wanton acts of destruction, killings and desecrations. The Saudis, pushing their narrow, obscurantist interpretations of Islam have razed masjids in Bahrain’s Bu Quwah locality and deliberately thrown copies of the Qur’an on the floor trampling upon them. Despite these well-documented cases of vandalism and sacrilege, the aged and ailing Saudi King, Abdullah ibn Abdulaziz, has vowed his “full backing” for Bahrain’s ruling Khalifah family. These obscurantist bedouins from the deep recesses of the desert have no legitimacy to rule either in the Arabian Peninsula or Bahrain; the people whom they rule have given them no mandate to do so. The only reason they are in power is because they were agents of the British who installed them on the thrones and now they have transferred their loyalty to the US. They worship America and act at its command. On its part, Washington turns a blind eye to their crimes.

There are other equally troubling crimes the Bahrainis and the Saudis have perpetrated in the island state when people launched peaceful protests for reform in mid-February. Tens of thousands of people accompanied by women and children gathered at Manama’s Pearl Square to press for reform of the political system. They carried flowers that they wanted to give to the Bahraini security forces, reflecting their peaceful intent. Instead, the police and troops fired into unarmed and completely peaceful protesters. Scores were injured or killed. As the protests escalated and it appeared that the Bahraini security forces that have recruited thousands of mercenaries from Pakistan, Jordan, Yemen, and elsewhere into its ranks, are unable to control the surging crowds, Saudi and Emirate troops were rushed in to shore up the regime.

At the risk of offending readers’ sensitivities because of the subject matter, some of the terrible things occurring in Bahrain need to be highlighted. The case of Ayat al-Qermezi, a 20-year-old female poet, is the most shocking. Ayat had composed and recited poems critical of Bahraini Prime Minister Khalifah bin Salman al-Khalifah to the masses assembled in Pearl Square. Soon thereafter, she started receiving threatening emails and letters. Most were laced with profanities. When she referred these to the police, instead of taking her complaint seriously and apprehending the culprits, they insulted and threatened her.

In late March, masked Bahraini troops raided al-Qermezi’s home twice, demanding the family tell them about Ayat’s whereabouts or they would “destroy the house over your heads, by the order of high-ranking officials,” according to her mother’s statement. Following such threats and coercion, al-Qermezi’s family was forced to tell them where she was hiding. Ayat then disappeared and the family heard no word from her. Deeply concerned about this, the family started searching for her. The police were no help; they told the family they had no information about Ayat and tried to force them to confirm through a letter that their daughter had gone missing. In mid-April, al-Qermezi’s family received an anonymous call informing them that Ayat was in a coma at an army Hospital.

At the hospital, doctors confirmed that Ayat had gone into a coma after being raped repeatedly. The physicians’ efforts failed to save her life and she died at the army hospital. Her story has received scant attention in the Western media that goes into a fit of frenzy if any such crime is perpetrated by people opposed to the West. In Bahrain’s case, a blanket of silence has fallen over Ayat’s brutal torture, rape and murder. Even al-Jazeera, the Qatari-based network that claims to be leading the Arab Awakening by its 24/7 coverage of events elsewhere in the Middle East, has been silent about atrocities in Bahrain. There are no grainy videos of atrocities captured on cell-phone cameras that al-Jazeera is so fond of showing of events in Syria and Libya. Ayat’s story is not seen worthy of being reported by the Doha-based network that seems intent on protecting the decrepit monarchies in and around the Persian Gulf including their own in Qatar. Instead, al-Jazeera beams exaggerated reports about what the Syrian or Libyan regimes are allegedly doing to their people.

So far, several other women, including doctors, university professors and students, have been kidnapped or arrested by Bahraini security forces and have similarly disappeared. Masked Bahraini security agents have occupied all hospitals and prevent the injured from being treated. Doctors and nurses wishing to fulfill their professional duty are prevented from doing so. Dr. Richard Sollom, deputy director of Physicians for Human Rights, was so concerned about the abuse of doctors and nurses in Bahrain after his fact-finding mission that he contributed an op-ed piece to the British daily The Independent on April 21. Following his visit to Bahrain — a rare example of independent outside reporting allowed by the regime — Dr. Sollom wrote: “In two decades of conducting human rights investigations in more than 20 countries, I have never seen such widespread and systematic violations of medical neutrality as I did in Bahrain… Ambulances, hospitals and medical clinics as well as its physicians, nurses, and medical staff are all being targeted. It’s pervasive and ongoing. These attacks violate the principle of medical neutrality and are grave breaches of international law.” Doctors around the world have expressed similar shock and outrage.

Since doctors and nurses have had to treat patients that suffered injuries when shot at by Bahraini security forces, this has provided them “unparalleled evidence” of the atrocities committed by the authorities and its forces. “Their knowledge of these atrocities has also made them targets,” says Dr. Sollom. He wrote that more than 32 healthcare professionals have been “abducted” (his words in the original) “over the last two months and are being held incommunicado by security forces.” At the Salmaniyah, the island state’s largest hospital where Bahrain’s leading medical specialists work, “the hospital administration… called doctors and nurses in for appointments, from which they were never seen again. Presumably they are taken to places of detention,” he wrote.

Dr. Sollom specifically mentioned the Criminal Investigations Directorate at Adliya, a notorious detention centre where torture is rampant. His team, however, found that doctors did not have to be taken to detention centres to suffer violent attacks. “We have documented the story of six doctors beaten by security forces in a Salmaniyah staff room. When security forces are capable of such brutality in a hospital, one can only imagine what happens in a detention center,” he wrote in his April 21 piece. Doctors have even been dragged from their homes in the middle of the night and have simply disappeared.

Doctors are supposed to treat patients whoever they are, not locked up because they are caring for supposed dissidents. John Black, president of the Royal College of Surgeons of England, said: “These reports of harassment of medical staff in the ongoing unrest in Bahrain, including surgeons trained in the UK, are deeply disturbing. The protection and care of people wounded in conflict is a basic right guaranteed by the Geneva Convention and one that every doctor or medical institution should be free to fulfill.”

Michael Wilks, vice-president of the British Medical Association and a former chair of the ethics committee, said: “The Geneva Convention and international medical ethical standards are absolutely clear — punishing doctors because they are perceived to be treating patients of whom the regime disapproves is completely unacceptable.” Such mistreatment, harassment and torture of doctors and nurses constitute war crimes but we have yet to hear from the champions of human rights in the US or Europe that the Bahraini rulers should be tried for war crimes.

According to a documentary secretly recorded in Bahrain and shown by the American television network, ABC, on April 19, “private companies” in Bahrain have dismissed some 800 employees from work because they participated in anti-government demonstrations. In his report for ABC, Trevor Bormann said most people did not wish to reveal their identity when interviewed for fear of being arrested, but Farida Ghulam whose husband Ibrahim Sharif was arrested and is still held in detention, made no attempt to hide her identity. Bormann pointed out that while the regime tries to give a sectarian twist to the demonstrations, Farida Ghulam and her husband are Sunnis and they are asking for reforms based on respect for people’s rights. Jafar Adam, a youth who was shot in the hip also made no attempt to conceal his identity. He said that the security forces already know his identity since he went to the hospital where they took all his details. Other youth injured in demonstrations — and Bormann showed several of them with bodies pierced with shotgun pellets — were willing to show their wounds but not their faces. They have not been to the hospital for treatment for fear of being arrested and possibly disappearing like scores of other injured people.

The case of Dr. Masaud Jahromi, Chairman of the Engineering Department at Ahlia University in Bahrain, is equally disturbing. A highly respected academic who had obtained his Masters and PhD from Britain, and dedicated his life to academic excellence, was dragged from his bed at 2:30 am by Bahraini security forces on April 14. He has not been involved in any protests. His only “crime” is that like the majority of Bahrain’s population, he is Shia. That as far as the illegitimate Bahraini rulers and their Saudi patrons are concerned is enough to have him arrested, tortured and perhaps killed.

The Bahraini regime is perpetrating terrible crimes against innocent civilians. Life for the overwhelming majority of its citizens has become living hell. Their neighborhoods are under constant surveillance; armored personnel carriers and tanks are stationed on every street corner with security personnel going around smashing cars and property for no apparent reason except to humiliate people. Objecting to such vandalism immediately leads to arrest and disappearances. Even without objecting, it is enough to be a young Shia to be dragged away by the overzealous police that act like the Gestapo.

But do not wait to hear about this on CNN or al-Jazeera. And you will certainly not hear one Western ruler objecting to such barbaric behavior.