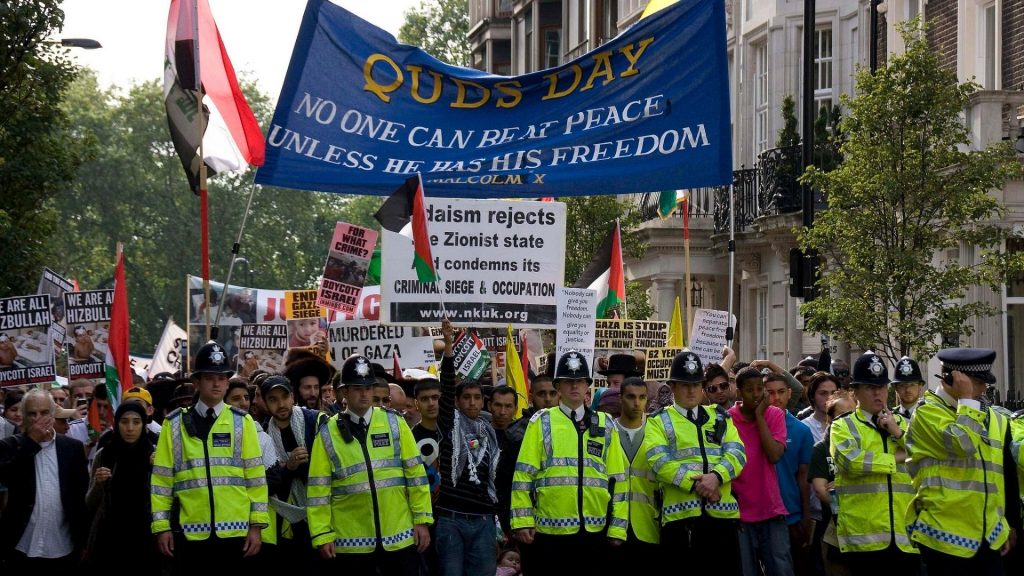 IHRC is issuing this guidance to protestors attending this year’s anti-apartheid Al-Quds Day demonstration in London this month after pro-Israeli Jewish groups started their campaign of inciting hatred by describing the event as a “virus”.

The publication quoted the Community Security Trust, an organisation that operates as a UK charity, ostensibly to monitor anti-Semitic attacks and provide security to Britain’s Jews but which has links to Israel’s notorious spy agency, Mossad, and is a key instrument in demonising and delegitimising supporters of Palestinian rights.

In recent years, the increasing incitement of hatred against the event has led to an upsurge in harassment and intimidation of protestors by an alliance of far-right activists and Zionist organisations. We have seen Zionist counter-demonstrators shouting at women and children that they are terrorists, murderers, paedophiles and other offensive expressions.

A possible massacre was only averted at the 2017 Al-Quds Day rally when the far-right terrorist Darren Osborne, who had been incited by online articles against the event, failed to breach the police cordon to attack demonstrators and changed his choice of target to Muslim worshippers at Finsbury Park Mosque. In sentencing Osborne the judge stated:

On 17th June 2017, you hired a big heavy van and the next day you took it from Cardiff to London intending to deploy it as a lethal weapon to drive into and murder innocent people, lawfully assembling and protesting in London. You told the jury you intended to “plough through as many of them as possible”.

The Jewish News and Jewish Chronicle ran multiple articles and opinion pieces demonising the event and participants in the days leading up to 17 June 2017.

It is worth noting that In 2018 and 2019, a known Zionist extremist with ties to an outlawed Jewish terrorist group in the US threatened on social media to shoot protestors who took part in the demonstration.

We issue the following guidance to all attendees:

The Al-Quds Day demo has taken place in London for over 40 years without a single arrest. This year’s event is scheduled for Sunday 24th of April. Participants will assemble outside the Home Office (2 Marsham St, London SW1P 4DF) at 3 pm, before marching to Downing Street, where they will hear speeches by prominent anti-apartheid guest speakers.