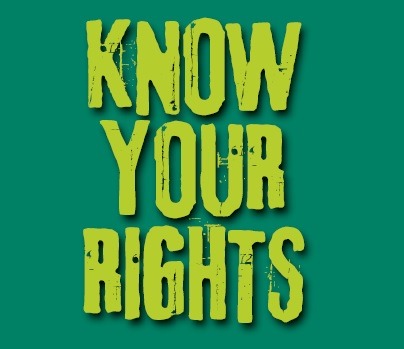 IHRC has been empowering the community to know their rights since 1997. We have done this by distributing rights information leaflets and other literature, doing casework and since October last year IHRC’s Know Your Rights Advocate has been delivering workshops up and down the country.

In Autumn/ Winter 2014, we will be hosting the following fun, practical and interactive ‘Know Your Rights’ workshops:

Tickets for each workshop costs £6. A ticket for the entire Autumn 2014 Series (all 4 workshops inclusive) will cost £20. PLEASE CLICK HERE TO BUY YOUR TICKETS

Scroll down for more information on each workshop. Space is limited so book in advance to avoid disappointment!

Why do I need to know my rights?

Know your rights workshops are not just for those that do ‘wrong’ or ‘criminals’. They are designed for all those targeted by the police and other officers.

And you can be treated in quite invasive and humiliating ways very easily by the police and other officials – even if you are ‘innocent’, not a criminal, and not suspected of criminality.

Many of you will know all of this but doubt the point of learning your rights because they think the police and other officers will do what they want and make up a story after the fact to justify their conduct, ignoring the law. Whilst this may be true, in each workshop we will spend some time talking about how to gather evidence that you control in a way that will mean that the officers cannot lie easily, and discourages them from attacking you.

These practical workshops are facilitated by people that not only know their rights but have actively asserted their rights in all these scenarios.

They are aimed at ensuring that you not only know your rights but also how to enforce them whilst minimising the risk that you increase problems.

In this fun and interactive workshop we will cover ‘stop and search’ and other powers that police commonly use day to day, what options you can prepare to use in advance, and prepare you to consider what the police are likely to do if you exercise those options. One of the key issues that we will cover is observing the police, recording the police [audio recording/photographing/filming the police] and talking to police. We will also cover the pros and cons of giving your name, address, date of birth, photo and other personal details, and the powers of PCSOs.

Did you know that in certain circumstances immigration officers can come up to you and ask you for your immigration status? To find out which circumstances and how to respond book your ticket to the workshop on Immigration checks and raids. During this interactive workshop we will show you what to do to prepare for stops and how to walk away confidently.

All you need to do to be stopped, questioned for up to 9 hours (soon to be 6 hours), detained, searched and have your property confiscated is to travel to or from Great Britain or just get on a plane within the UK.

As a traveller you are liable to be stopped under Schedule 7 of the Terrorism act 2000 – which permits the above. The powers are supposed to allow security personnel to determine whether people appear to be terrorists.

You can be stopped without any suspicion that you are a terrorist being required – you just need to be travelling to/from the UK.

It is also likely that you will be stopped if you are Asian, Muslim or travelling to/from places with high Muslim populations. Asian travellers from the UK,are 42 times more likely than white UK travellers to be stopped. Although religion is not monitored during stops, given that large numbers of Asians are Muslim and that reported questioning often focuses on religion, we believe that those perceived to be Muslim are very likely to be stopped. It is also highly likely that those travelling to and from Turkey or Syria are likely to be stopped.

You have more duties and fewer rights than a terror suspect or any other criminal suspect!

If you want to know the rights that you do have so that you are prepared for travelling to and from Great Britain attend this workshop! For those that have been to other workshops, we will also cover the rights that you will have when changes to the legislation come into force in the coming months.

Did you know that following the protests against the Zionist invasion of Gaza in 2010 over 200 pro-Palestinian protestors were charged with offences at the protests after having been captured on police film footage? Did you know that most were convicted, and of those, most were given prison sentences for relatively minor acts? (By contrast no Zionist protestors were charged.)

Did you know one anti-Zionist protestor was originally sentenced to one year in jail despite only having thrown aempty plastic bottle?

These protests started peacefully until the police attacked the protesters. This is a lesson to us all. If you protest or ever think of protesting, come to this workshop and learn how to prepare to protest, and what to do during a protest and what issues to watch out for.