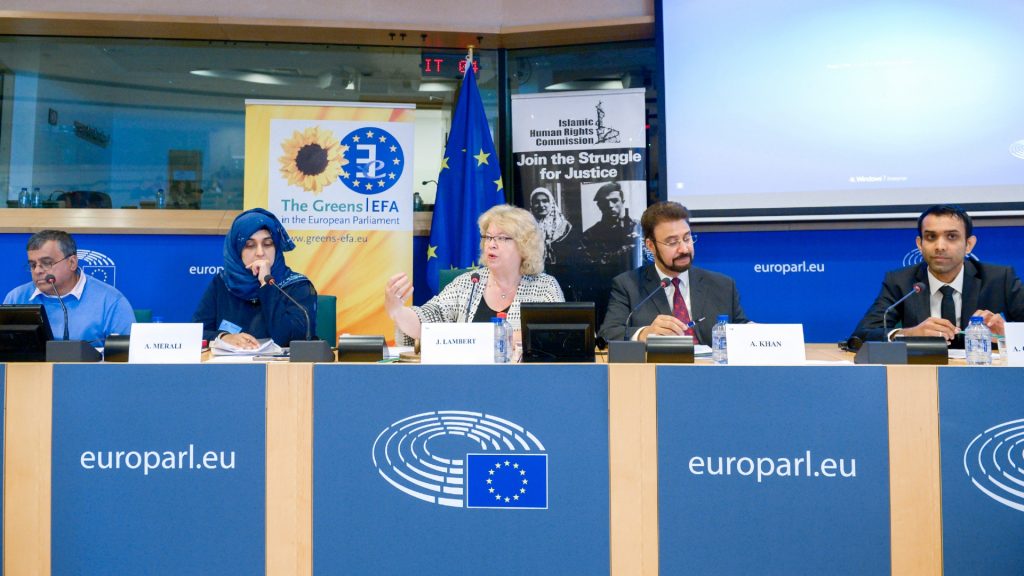 IHRC’s European launch of the book ‘Environment of Hate: the New Normal for Muslims in the UK and Europe’ based on its seminal research, took place on Tuesday, 27 September 2016 at the European Parliament in Brussels.

See a gallery of images below. For permission to reproduce images please contact media[AT]ihrc.org. Further details of the event follow below. Please contact caterina[AT]ihrc.org for further information. The event report continues after the photo gallery.

The research presented conveyed the way Islamophobia across Europe has evolved into new, accepted forms of discrimination. Special attention was given to the UK government’s PREVENT anti-extremism strategy which the authors stated is demonising and alienating Muslims. With an overview of headlines in popular media, the report highlighted embedded stereotypes and coded discriminatory language by which Muslims become victims of the social attitudes of the majority – learned through government policy and the media they consume – and this is then expressed in acts of hatred, hostility and violence.

This is the second such study the authors have undertaken in the UK and it takes into consideration age, religiosity and visible Muslimness as well as income and work status. Comparisons are also drawn with the findings in 2010 and the results are alarming.

Between 2010 and 2014 the number of people who reported seeing Islamophobia directed at someone else spiked from 50% to 82%. In the same period the number of people stating they had witnessed negative stereotypes about Islam and Muslims jumped from 69% to 93.3% suggesting these experiences have become almost universal for Muslims. [Event report continues after video.]

The authors blamed the worsening conditions on what they called a ‘hate environment’ that has been deliberately whipped up by the media, politicians and the commentariat, the purpose of which is to ‘otherise’ Muslims and legitimise discriminatory treatment of them through official policy. Find an executive summary here.

Hosted by MEPs Jean Lambert, Afzal Khan, and Sajjad Karim in collaboration with the ARDI Intergroup; panel discussions took place on the day featuring experts, academics, civil society organisations, EU institutions and European Muslim human rights activists. The launch explored how to have an intersectional approach to discrimination and hate crime and how to improve the implementation of non-discrimination legislation.