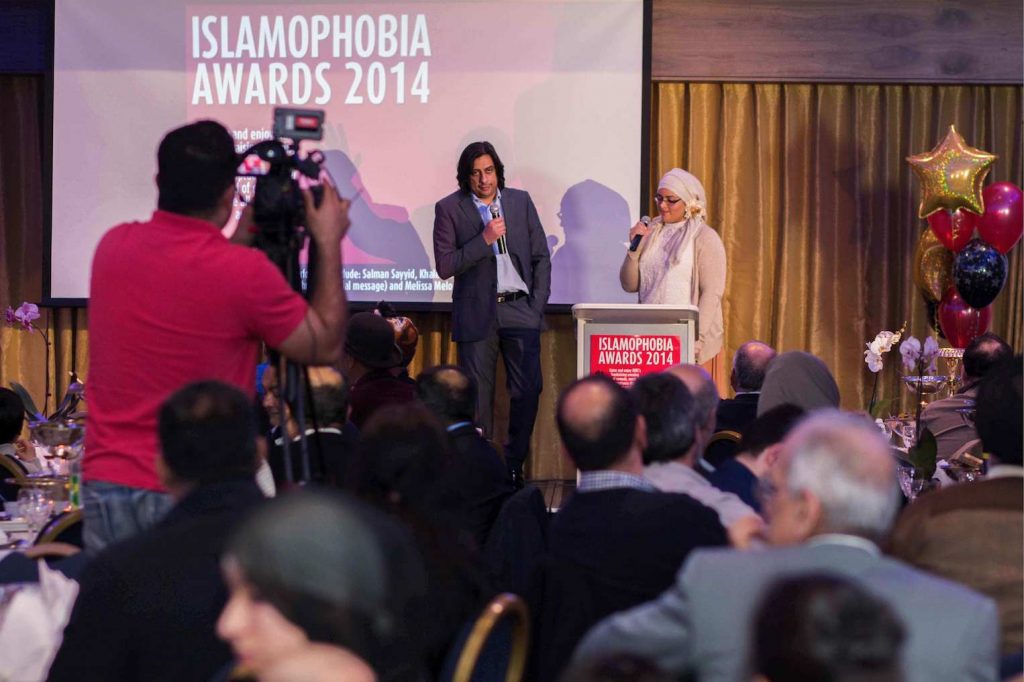 {jathumbnailoff}After 6 years of silence IHRC’s gala fundraiser the Islamophobia Awards were re-launched with a bang. This Award show with a twist not only acknowledged and awarded those that have persevered in combating discrimination, but also poked light-hearted fun at those in the public eye that have made Islamophobic comments demonising Muslims in the public sphere.

Islamophobia is an issue that is becoming more and more apparent in today’s society. In various arenas we can find discriminatory language and views aimed at the Muslim sphere and the only way to tackle these issues is to challenge them head on, which is exactly what this show aims to do (with added humour of course).  Over 25,000 people visited the voting page on the IHRC website to mark their voices heard and to name and shame the worst anti-Muslim personalities.

As forms of discrimination occur internationally the nominee selection included candidates from all continents so no one felt left behind. Nominees included French president Francois Hollande for his decision to invade Mali to the controversial nominee Aung San Suu Kyi who was selected due to her refusal to acknowledge the crisis the Rohingyan group faced in her country resulting in the situation to continue.

However it wasn’t only Islamophobes that were recognised on the night. IHRC as an organisation that advocates to establish a more safe and peaceful society for all, acknowledged individuals and organisations that share the same principles in mind.

One such example being was the organisation ‘Veterans for Peace’ which involves a number of ex military personnel that aim to eradicate governmental war and conflict affairs and intervention in other countries by raising awareness of the true cost of war.

The award show aims to recognise and show appreciation to those working hard to apply these principles into practice.

In addition to the awards, sumptuous dinner and entertainment, the evening accommodated a book stall which included various titles that can be found in the IHRC catalogue and bookshop as well as an auction which generated much needed funds for IHRC’s work.

As the guests would agree the vibrant atmosphere enjoyed by all at the event was thanks to the energetic hosts Leena and Nazim who not only managed to create a light hearted and enjoyable evening but also one that informed us all of the great work that is being done to combat Islamophobia.

An evening catered to appreciating advocates for equality, surrounded by culture and art and not to mention the appetising food on offer, it is safe to say it was a successful night.

Watch the videos of the event, or look at the photos.

See who was shortlisted and who won the awards for worst Islamophobes, or read about the shortlisted nominees and the winners here.

See whose work to battle Islamophobia was recognised on the night, or read about their work and achievements here.

I am delighted to send this message of welcome for the Islamophobia Awards Ceremony and for the valuable work of the Islamic Human Rights Commission, and I am proud to have been  involved in some of their work.

I love the tone of this event as it takes an issue that has at its heart darkness and seeks to make it lighter on our community. After all so much of the nonsense written about Islam and Muslims goes beyond sadness and into parody.  Well done IHRC for your sterling work. My vote goes to Bibi Netanyahu for his Outstanding Effort to demonise Islam.

I am sorry I cannot attend the Islamophobia Awards 2014, and wait with bated breath to see who this year’s worthy – or should that be unworthy? – winners are. It is not often that one expresses one’s support for an event by wishing that it should soon go out of business for lack of suitable nominees, but that is, indeed my wish for the event. But whilst there continues to be such a plentiful supply of scurrilous potential nominees, I wish the event every success and I hope you all have an enjoyable evening.

I am sorry I cannot be here, but it is my pleasure to write in support of this year’s Islamophobia Awards and the valuable work of the Islamic Human Rights Commission. It is important to work together within a variety of fora to counter discrimination targeted at the Muslim community.

I wish the Islamophobia Awards every success in highlighting such prejudice.

The work that the IHRC is doing in relation to the problem of Islamophobia is among the most important in the world today. The IHRC is not only involved in concrete campaigns against Islamophobia but is also doing cutting edge empirical social science research about Islamophobia in Europe and the world at large. They are doing what academic institutes and universities should be doing. However, in the absent of a real commitment from universities and state institutions to tackle research and public policy on discrimination against Muslims, the IHRC has taken the lead to confront Islamophobia at the level of politics, policy and knowledge production. No other institution in the world today has dedicated more attention to Islamophobia than the IHRC. The quality and quantity of their research publications on the topic are impressive! They deserve to be recognised as one of the world’s leading institutions working to eradicate Islamophobia. The work IHRC is doing constitutes a model that we should all be following.

The fact that prejudice and ignorance are ridiculous doesn’t – unfortunately – make them less lethal. But it is important from time to time to be reminded that they are ridiculous, and that’s why this event is so welcome. Some theologians have contrasted the light-heartedness of heaven with the fact that the devil and his angels take themselves with deadly seriousness, even when engaged in the most absurd project possible, resisting the all-powerful goodness of God. I hope this evening will make some contribution to delivering us from deadly seriousness and recall us to the joy that faith opens for us.

I’m really pleased to see the Islamophobia Awards returning this year for what I know will be a very fun evening with a serious message.  Discrimination and prejudice in all their forms are completely unacceptable but, sadly, they persist. With the current climate of anti-immigration rhetoric in the media, I am particularly concerned about rising xenophobia and Islamophobia. That’s why the work of the Islamic Human Rights Commission is so important.

Operating to the highest standards over the years, the Islamic Human Rights Commission continues to remain active and serious in its work. Through its activities, the IHRC has evolved to become an important voice which brings to our attention key facts and figures in serious and informative research, ensuring that we, the public, are kept accurately informed in a consistent and academic way. I am very supportive of their work and their truly valuable contribution.

The three main parties continue their politics of fear, reinforcing people’s anxiety about Muslim and migrant communities. As more people resent government policies serving a wealthy elite, state-sponsored Islamophobia conveniently displaces this resentment to others. Comedy helps us to laugh at this agenda while we fight against it. Best wishes for a successful evening

At a time when Islamophobia is on the rise and when secular tensions seem to be mounting globally, the Islamic Human Rights Commission (IHRC) is doing vital work to try to build bridges between communities here at home in the UK, and abroad.

The regular exhibitions, talks and book launches held at the IHRC bookshop brings members of the local community together and provides a platform for otherwise seemingly taboo and potentially controversial subjects to be spoken about openly.

The IHRC also reach out to support local charitable initiatives and recently supported a volunteer run soup kitchen called the Children of Adam by providing 100 free hot meals for the homeless. These sorts of charitable outreach efforts are vital in terms of helping to tackle Islamophobia, promoting community cohesion, and putting into practice the charitable teachings enshrined in Islam.

The IHRC does not shy away from tackling the larger issues that many other groups are too scared to discuss. They openly promote concepts like Genocide Memorial Day; they are at the forefront of many events supporting the oppressed people of Palestine; they challenge the continued and unjustifiable existence of places like Guantanamo Bay, and otherwise speak up for those with marginalised voices as well as those with no voice at all.

challenge each other’s beliefs and thought processes without fear of recourse to recrimination.

The provision of that space and service is one of the key strengths of the IHRC.

IHRC would like to thank the sponsors of the event: Decoloniality Europe, Press TV, 5pillarz.com and Muslim Directory.

We would also like to thank Faith Counselling and d2rCrossMedia.