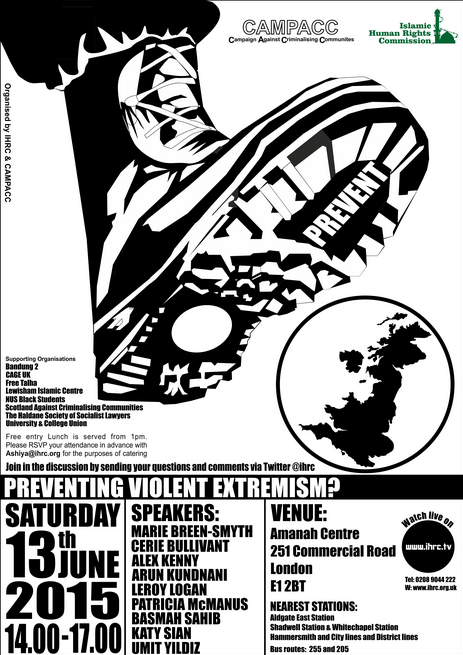 The conference was organised with several aims: to question what the government’s Prevent programme really prevents or protects, explore how voluntary organisations and public-sector employees should respond to its pressures, discuss how we can all collectively resist its attacks on free debate and find ways to undermine the state’s efforts to enforce the programme.Long before the conference, the racist, repressive role of the Prevent programme had been well documented (Kundnani, 2009; Cage UK, 2014). Its various critics need a clearer bases for joint resistance, which has been growing, especially since the programme was put on a statutory basis.

Watch the videos of the conference here, and read a full summary report of the event below.

Background to the conference

Formulated by the New Labour government to tackle ‘extremism’,the Prevent programme is the second strand of a 4-prong strategy within CONTEST, central to the UK’s counter-terror strategy. The Home Office has funded this for many years, supposedly to prevent violent forms of extremism. The basic rationale is that people advocating ‘non-violent extremism’ create an environment in which terrorists can operate and so encourage ‘violent extremism’. Thus entire Muslim communities (and communities from specific ethnic backgrounds)are being monitored for ‘extremist’ ideas or ideas that oppose the government’s policies– officially defined as hostility to ‘British values’. This phrase conflates universal human values with the British state, whose foreign policy regularly contradicts these supposed values. In practice, the Prevent programme has interpreted ‘extremism’ to encompass any Muslim criticism of UK government policies.

This practice has spread fear within Muslim communities, as well as among voluntary organisations and public-sector employees who are expected to implement the programme. Worse still, under the last coalition government the programme was given a statutory basis by the Counter-Terrorism and Security Act. This imposes duties on all public-sector institutions, thus furthers the promotion and normalisation of Islamophobia.

Since the introduction of the Prevent strategy in 2005, IHRC has consistently engaged in formulating counter-narratives toit. Surveillance specifically focussed on Muslim communities is counter-productive; by conceiving of Muslims as guilty (or suspected) of terrorism by association, the programme institutionalises racism and discrimination against Muslim communities. It alienates entire communities, while allowing the government to ignore the communities’ own efforts against violent extremism.

The afternoon public conference was opened by Abed Choudhury, Head of Advocacy at IHRC and one of the organisers of the event. He stated IHRC’s position that we now live in a police state with a supposed democratic mandate in which all Muslims, regardless of demographic profile, are viewed as at risk of radicalisation.  The conference aims is to challenge the government strategy in a coordinated effort, not just as Muslims but as a diverse national community.

The first panel, chaired by Raza Kazim (Head of Campaigns at IHRC), entitled ‘Preventing dissent’ began with Leroy Logan, an ex-superintendent who served 30 years with the Metropolitan Police and is a founding member of the Metropolitan Black Police Association (Met BPA).Logan spoke on the significance of working in partnership with the community in order for the police to deliver an ‘efficient, effective and proactive service’. Rather than ‘alienation or [simply] enforcement’ of surveillance measures upon communities, effective policing continues to rely upon partnership with the community – a ‘two way flow of information’ – without which distrust between the police force and community is exacerbated and ignorance prevails. Logan emphasised that the police have always been and continue to be institutionally racist, such that ‘racial profiling has changed to include faith-based profiling’. Two solutions Logan suggested are accountability of chief constables and ‘changing the narrative on radicalisation/extremism’. He highlighted that there are members of the police force who do wish to challenge this legislation internally; this can be developed through ‘combined people and individual power’.

Basmah Sahib, a paralegal from Bindmans LLP, delivered a very informative presentation on how the Prevent duty erodes civil liberties. Sahib began by highlighting the absence of a codified Bill of Rights in the UK that specifies rights, though it can be found in various legal sources, for example the Universal Declaration of Human Rights and the Human Rights Act 1998. In discussing how Prevent threatens civil liberties, Sahib emphasised “specified authorities” which includes local authorities, schools, nurseries, universities, NHS, British Transport Police etc. Thus basically everyone must “have due regard to the need to prevent people from being drawn into terrorism”. This duty is enforced by section 29(1) of CTS Act.

Furthermore, authorities have to share personal information, which conflicts with Article 8 of the ECHR and the Data Protection Act 1988. Sahib concluded by citing cases that highlight what these intrusive policies mean for our civil liberties. For example Muslim schoolchildren have been asked to complete surveys to assess whether they had extremist tendencies. This is a violation of Article 14 of the Human Rights Act 1998: Prohibition of discrimination.

CAGE UK’s spokesperson, Cerie Bullivant, illustrated through CAGE’s countless run-ins with Prevent, how the strategy is determined to prevent all forms of dissent against the state (see Cage UK, 2014). Bullivant said, ‘CAGE organised a national tour on Prevent which Prevent tried at every opportunity to prevent’. A broad coalition ‘of trade unions, people of colour, people of faith and none’ is needed to oppose Prevent because the ‘cost of not working with Prevent is high’. Indeed, those who resist have been punished in various ways. ‘Dissent is crucial for a democratic society’ and so must be protected.

Our keynote speaker, Arun Kundnani, writes about race, Islamophobia, political violence and surveillance. His latest book, The Muslims are Coming! Islamophobia, extremism, and the domestic War on Terror, was published in 2014 and is available from the IHRC Bookshop here. He teaches at New York University.

Kundnani discusses the ways in which the Prevent strategy is weak. Firstly, it manipulates concepts like radicalisation, extremism, terrorism etc so that certain types of violence can be ‘associated with certain communities, while more pervasive state violence needs to be seen as normal’. The CTS Act has made Prevent statutory because otherwise people would not have wanted to participate as it clearly threatens freedom of speech as well as other rights; effectively Prevent would fail were it not statutory.

Furthermore, the authorities claim that the programme addresses the problem that ‘non-violent extremism’ readily leads to ‘violent extremism’. According to their conveyor-belt model, ‘radicalisation is the process by which this takes place’. Kundnani pointed out that this model is contradicted by many studies showing that there is no link between ideology and terrorism. Religious ideology is not the main source, nor the main target of the Prevent programme in practice. Rather, as Kundnani argued, Prevent specifically targets Muslims who condemn UK foreign policy. Nevertheless the conveyor-belt model is not about to change, ‘as it didn’t arise from evidence. Rather, the model came from a neoconservative political movement whose aim is de-politicisation’, i.e. to prevent a political opposition movement. Kundnani concluded by presenting the agenda’s flaws indicating its ineffectiveness and lack of credibility for achieving its official aims. Professional staff are the Achilles heel of the programme and so can undermine it.

The second panel, entitled ‘Preventing debate’ was chaired by Katy Sian . Marie Breen-Smyth, a professor from the University of Surrey, spoke of the rhetoric of ‘non-violent extremism ‘used by the government against dissent. Additionally, the answer to counter-terrorism is more freedom of expression and speech. The job of academics, she said, is to identify the root of societal problems.

Robert Ferguson, National Union of Teachers (NUT)member from NewVic College, joined the panel (substituting for Alex Kenny, who was unable to attend). At its April conference, the NUT had passed a motion saying that the Prevent programme has no place in education. As this shows, the CTS Act has changed the political landscape around the programme. Ferguson demonstrated how Prevent has induced fear in classrooms, thus suppressing free discussion and free speech. Referring to an incident in which three Muslim students were suspended, Ferguson adamantly reiterated, ‘No Muslim student… should feel that they are under suspicion simply because of their faith’. Students should be able to express dissent without being ‘Channelled’ – i.e. referred to the Channel programme as ‘vulnerable to radicalisation’. In addition, Ferguson described Prevent as inherently discriminatory if pupils of ‘white British majority, with connections to military families, are deemed self-evidently not at risk of ‘radicalism’.

Patricia McManus, of the University and College Union (UCU), highlighted that at its annual Congress in May this year, delegates debated and then voted on a motion to campaign against the Prevent Agenda, which was passed by a significant majority (UCU, 2015). The full text of the motion can be found here. As McManus demonstrated, UCU are campaigning against the use of Prevent in Further Education (FE) and Higher Education (HE) institutions, lobbying MPs to repeal the agenda, providing guidance to branches on how to respond to visits from Prevent officers, issuing guidance to resist measures, raising questions about implications for race equality, academic freedom and freedom of speech and reaffirming opposition to Islamophobia and racism in all its forms. She said that effective resistance needs a critical mass so that together we can make the Prevent agenda unenforceable.

Last but not least, Umit Yildiz, UCU Equality Officer further emphasised that ‘Unions are the heart of the campaign’. As Prevent is based on racism, we can ‘make sure all employers are training their staff on race equality’. Furthermore, the attack on our public services will be overcome by means of a joint campaign.

Both panels were followed by audience discussions. We had a variety of academics, grassroots activists, lawyers, press and students in the audience. They shared their concerns, questions, opinions and experiences with enforcement of the Prevent agenda, especially its Islamophobic and repressive roles. Some discussion points: Education-sector staff have undergone pressure to report on students’ views, thus deterring free debate and undermining trust. The Prevent programme has co-opted the concept of ‘safe spaces for debate’ in educational institutions, e.g. by suppressing debate on controversial issues and even on the Prevent programme itself. Over the past decade, anti-war and pro-Palestine protests had brought together Muslims with non-Muslims, but such critical views on UK foreign policy are being targeted as ‘extremist’. If the Prevent programme is not curtailed, then it may go after us all as ‘radicals’ or ‘extremists’. We need trade-union activists in the education sector to be at the cutting edge of a broad-based opposition campaign.

Intervention strategy for an opposition campaign: The Prevent programme exists to protect government interests and discourses, to prevent dissent and to ban critical thinking. Many trade-union and community activists have been attempting to stop the programme, yet it will continue unless we respond to its pressures and collectively resist its attacks.In particular, an opposition campaign should intervene at key points in the Prevent programme – e.g. teacher training in ‘counter-radicalisation’, and teachers’ duty to report on students’ views. As various organisations and public-sector employees, we need to mobilise a coalition with clear objectives and shared counter-narratives. While refusingto collaborate with the Prevent agenda, we should reclaim the language that it has been co-opted, e.g. by restoring truly ‘safe spaces’ for free political debate, and by creating true community partnerships around this aim. To develop such a campaign, IHRC will be organising seminars for the wider public, drafting joint statements, producing demands and building links with other groups (e.g. PSC, 2015). The stronger the solidarity, the more effectively we can undermine the state’s effort to enforce the Prevent programme.

The success of the conference was largely due to co-sponsorship of the event by Campaign Against Criminalising Communities (CAMPACC) and the Haldane Society of Socialist Lawyers, to which we are thoroughly grateful for collaborating with us on this important topic. With the help of our co-sponsors, the conference featured a diverse panel of speakers, from grassroots activists and academics to teachers and lawyers.

Kundnani, A. (2009) Spooked: How not to prevent violent extremism, Institute of Race Relations, http://www.irr.org.uk/news/spooked-how-not-to-prevent-violent-extremism

Kundnani, A. (2014) The Muslims are Coming! Islamophobia, extremism, and the domestic War on Terror.