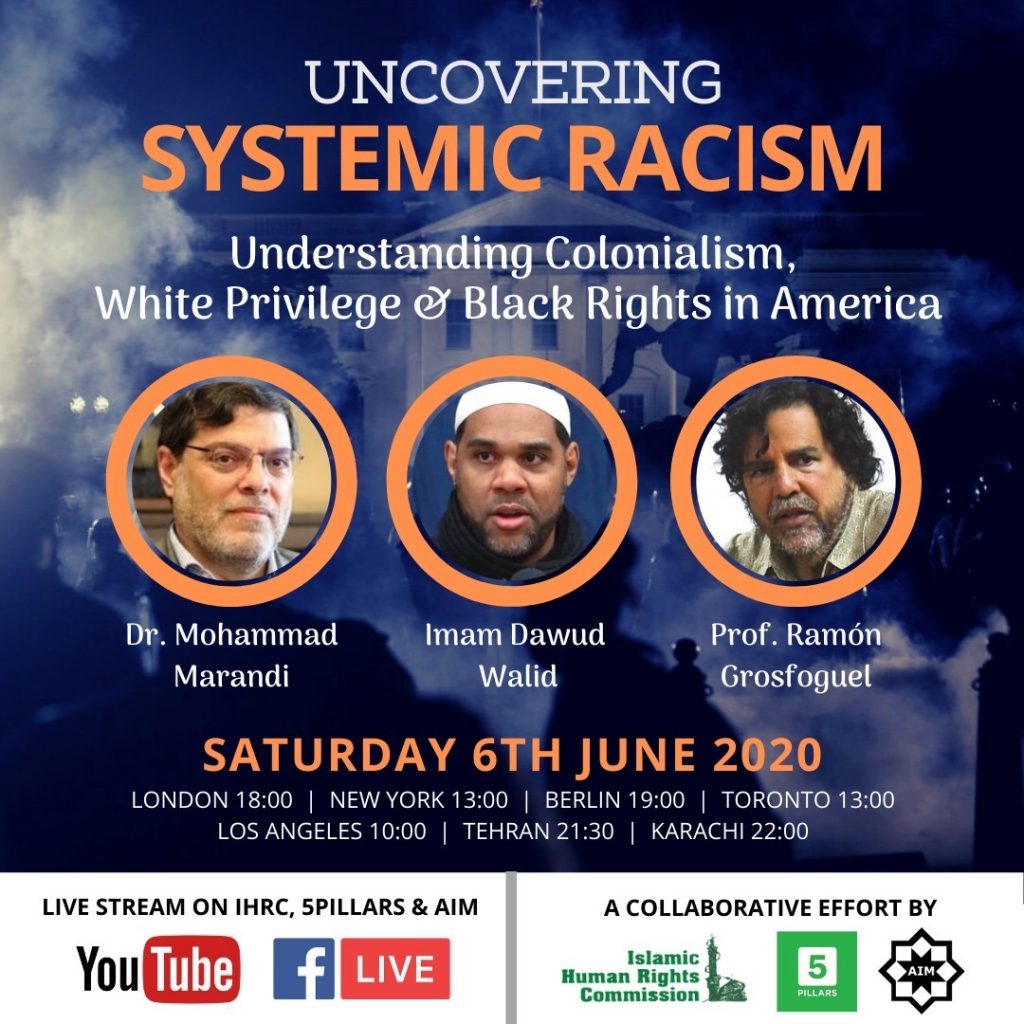 IHRC co-hosted an online event with 5Pillars and AIM on 6 June 2020 entitled Uncovering Systemic Racism: Understanding Colonialism, White Privilege and Black Rights in the USA. The conversation gained 15,000 views on the IHRC Facebook page, 5K views on the AIM Facebook page, almost 650 views on the IHRC and AIM YouTube channel. The discussion featured presentations by Imam Dawud Walid (Executive Director of the Michigan chapter of the Council on American-Islamic Relations and author of Towards Sacred Activism), Professor Ramón Grosfoguel (Professor at UC Berkley) and Dr Mohammad Marandi (academic and political analyst based in Tehran), and was chaired by Raza Kazim (Head of Campaigns at IHRC).

Given the current unrest in the United States, the event explored colonialism and white privilege and its impact on Black rights in America. The purpose of the discussion is to encourage people to require consider the narratives that are being shared from the grassroots level and from the oppressors’ point of view, and how some of the ways those narratives are being dispersed is deflecting from the real issues that are embedded in society.

Imam Dawud Walid spoke from the perspective of an African American and as a descendant of incarcerated Africans from West Africa, from the Fula people and Mandinka people, enslaved by the British, and offered his thoughts from a spiritual analysis. He discussed his belief in the tactics and sometimes necessity to protest and hold public rallies, and the need for legislative reform to address certain issues, however based on history and reading of the Qur’an, Imam Dawud does not believe that the plight of African Americans and Native Americans can be solved by legislation and adjudication and it cannot simply be marched away. He made mention of the already existing number of remedies regarding policy, such as anti-lynching laws and affirmative action, but the problem of systemic police brutality has not eroded in the past 50 years and mass incarceration of African Americans is worse now than it was at the time of Dr Martin Luther King Jr.

Imam Dawud proposes that a real cultural shift in the US and Western countries is essential through clear thinking by giving spiritual remedies to diseases of the heart. He quoted the hadith of the Messenger of Allah (peace and blessings be upon him):

Imam Dawud explains that racism has always taken place throughout history and the worst manifestation of it is the form of racism based upon the false ideology of white supremacy that informed the African Holocaust, colonialism of lands, illegal occupation and dehumanisation of people. At the roots, the false ideology of white supremacy is satanic religion, based on Surah Al-A’raf ayah 12:

[Allah] said, “What prevented you from prostrating when I commanded you?” [Satan] said, “I am better than him. You created me from fire and created him from clay.”

Furthermore, Imam Dawud mentioned that Ali ibn Abi Talib said of Iblis that he is the Imam of the tribalists and racist ones and the predecessor of those who displayed their arrogance. Therefore, elucidating that arrogance and tribalism is the primary spiritual malady which informs individual human beings within developed structures of oppression.

Imam Dawud concluded with emphasising that besides political mobilisations, attention must also be drawn to race issues among Muslim communities and the need to generate more robust solutions to bring cultural shifts that will lead to long-term transformation, not just in US domestic policy but also foreign policy.

Next to speak was Dr Mohammad Marandi. Dr Marandi shared his thoughts on the problem of fear, namely how the Muslim community do themselves a great disservice when living in a state of fear. He explains that over the past few decades, Muslim communities were among the most radical in supporting change and social justice, however, many members of the Muslim community became tired of always being in the limelight in Britain and the US, and thus opted instead live a more private and individualistic lifestyle. He stated that other communities have become more active, but the Muslim absence alongside people of different faiths and ideologies is evident.  Dr Marandi further explained that the Muslim community itself is engulfed in sectarianism and racism which prevents the ability of Muslim communities to critique hierarchy of race and civilisation. It is not the entire Islamic community facing this serious problem; however, Muslims are not in a position to bring about radical reform that Muslims would benefit from. Dr Marandi suggested that the first change that has to take place is within the Muslim community – how we treat other Muslims and people of other backgrounds.

Dr Marandi also raised the issue of intellectual colonisation of many Muslims. He said that many intellectuals are deeply embedded in the hegemonic ideology and liberal capitalism and the Eurocentric ideology that controls American and European society. Consequently, oftentimes in order to justify inaction, it is easier for individuals to become a part of the establishment and be critical in a mainstream sort of way, and the colonisation of our minds makes us the same as our oppressors.

Dr Marandi concluded with expressing his hopes that the younger generation will move away from the mistakes of the previous generations, and the youth from different sects, backgrounds, faiths and political persuasions will build coalitions to resist against European and American forces that are subjugating people within Western countries and across the world.

Professor Ramón Grosfoguel focused more on the structural dimensions of racism by emphasising the need to understand the US empire as being founded in genocide, slavery and colonialism. He mentioned that we know the communities of colour are disempowered in many ways and are unfortunately in a position of insubordination, and so there is a need to distinguish between racial prejudice and structural racism. Professor Ramón explained that racial prejudice is more disseminated and includes people themselves who are oppressed by structural racism. Furthermore, they themselves can also reproduce racial stereotypes and prejudices to other communities and as well as towards themselves. Such racial prejudice is not enough to understand racism. He expands that structural aspects of racism are more perverse because a structure benefits, in the case of the US, the white population over other communities.

Furthermore, Professor Ramón explains why it is not enough to put charges on the individual police that assassinated George Floyd. The structural racism will continue and that is why we see a new generation of people fighting against the institutions that uphold racism. Educating the police is not enough because of the way the police forces are organised, police behaviour, the forms of recruitment, the way they operate vis-à-vis communities of colour, etc. and it is still a white supremacist institution.

He explained that minorities are becoming the majority and white populations are decreasing in many states. Thus, as the US enters into a declining empire, white America becomes more and more defensive of their privilege and white supremacy. Conclusively, Professor Ramón stated the decolonising of the empire implies a major transformation of the USA as it exists today, but not to destroy the people, but to improve their situation in a way that isn’t white privilege vis-à-vis the rest of humanity.

The presentations followed a Q&A and discussions were developed further around the need for a spiritual and cultural revolution in the US, whether racism is exclusive to white people, why racism is still systemic despite reformed laws, what is systemic racism, whether protestors should be rioting and looting and much more.