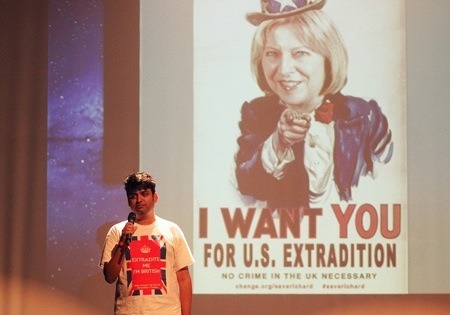 On Saturday, hundreds of human rights activists, politicians, artists and concerned citizens gathered in London to highlight the plight of Talha Ahsan and other British citizens detained without trial for years and facing unjust extradition to the US. Samira Quraishy reports for Ceasefire.

Extradite me I’m British!’ the t-shirt reads as we walked into the Rich Mix! arts theatre in Bethnal Green. The venue was packed out and there were near to no seats left, but my husband and I eventually found a seat near the front. Looking around me, I saw the familiar faces of fellow activists alongside those of popular personalities currently engaged in the fight for prisoners’ rights; particularly the rights of individuals incarcerated without charge in British high security prisons. Many of these prisoners are Muslims being held on trumped up terror-related charges.

The aim of tonight’s event was to raise awareness about the four men facing imminent extradition to the US should the British government continue to dance to America’s tune. The four men are Talha Ahsan, Babar Ahmad, Richard O’Dwyer and Gary McKinnon. From the films showcased and the discussions that were had, it soon became apparent that the former two are facing the arbitrary and soul crushing hand of US law simply because of their faith. But this does not mean O’Dwyer and McKinnon will have it easy either.

Ahsan’s younger brother, Hamja Ahsan, has been running a campaign with the help of family, friends and a new community of people who have been affected by the arbitrary anti-terror legislation put in place by the Labour Party under Tony Blair – most notably the notorious 2003 US-UK extradition treaty . This is not to say that the current coalition government is free from guilt. According to David Bermingham (one of the Natwest 3 and now a campaigner against US extradition), the Tories and LibDems are worse than Labour in that they pledged to change the law should they came to power, but have failed to do so.

The evening was filled with messages of support from family members and activists alike; an open letter to Samantha Cameron, written by Talha’s mother, was read out to a quiet room, as she made a heartfelt plea, mother to mother. In a video message, Robert King, the only free member of the Angola 3, stated that ‘if he (Ahsan) is sent to an American prison where he faces the possibility of 70 years, he will die in prison…if Great Britain extradites Talha to the United States, he will be executed…maybe not imminently…America has many ways to kill’. Actor and fellow campaigner, Riz Ahmed, also lent his support to the cause and short message from human rights lawyer Shami Chakrabati was delivered.

Hamja informed those present that since the unforgiving verdict on their case from the European Courts of Human Rights was delivered, he has now taken the campaign on fulltime dedicating himself to his brother’s cause and subsequently to the campaigns of other prisoners in British prisons. And this is true for all other family members and friends of those waiting extradition. When asked if he could have imagined his brother being detained 6 years ago, Hamja shakes his head emphatically stating that they had both been at a rally in support of Babar Ahmad shortly before his arrest. ‘It can happen to anyone!’, he said.

The evening is dotted with light-hearted moments provided by British comedians Ahir Shah  and Jeff Mirza, but by far my favourite personality of the night was the formidable Ashfaq Ahmad, Babar Ahmad’s father. Thrown into the thick of things almost overnight, Ashfaq, or ‘uncle Ashfaq’ as Moazzam Begg likes to call him, has been heading the campaign for his son’s release since 2003. A man of many depths, over the years Ashfaq has won the hearts of many with his sincerity and integrity in the face of great injustices and heartache as his son essentially lost a decade of his life.

Indeed the most tear jerking moments were when we watched the documentary on extradition by the Islamic Human Rights Commission in which both Ahsan and Ahmad’s fathers are interviewed and professed their desires to see their sons walk free and rejoin their families. In the documentary, human rights lawyer, Gareth Peirce, highlighted the shocking details of Babar Ahmad’s traumatizing arrest; police officers were briefed in such a way that it was deemed similar to ‘activating attack dogs’.

The evening was structured in a way whereby the audience was immediately drawn in –  rather than the usual speeches, we were treated to a more relaxed and personal discussion with the key personalities sitting on stage and discussing their personal stories and perspectives, and sharing their ups and downs.

We had Victoria Brittain in conversation with Moazzam Begg;  Begg in conversation with Ashfaq and Hamja. At one point Begg mentions that ‘Uncle Ashfaq is a very funny and brave man’, to which Ashfaq mumbled away from his mic, ‘I’m married…I have to be brave!’ – Only the few closest to the stage could have caught his quip. While you can hear the pain etched in his voice when he talks about his son, the most notable aspect that comes through about Ahmad, and indeed Ahsan, is their ability to give strength and to inspire others.

Fellow human rights campaigner and the patron for Cage Prisoners, Victoria Brittain, talked about her conversations with the prisoners; Ahsan’s eloquence and concern for his family, and Babar’s thoughtfulness and anxiety for other prisoners are constantly eluded to by all those who have been privileged to speak to them. In fact Ahmad prioritises his replies when writing to those who have written to him – other prisoners first, then children and then any other well-wishers.

When later asked what she thought of the event, Brittain stated it was “an important reaffirmation for the families of the men facing extradition; that they have much support from people in the UK from many walks of life through this traumatic long waiting period. And, although the catchy title of the event focused on the British names of Babar and Talha, it was good for everyone to remember too the less well-known man in the same small deportation unit at Long Lartin prison, namely Egyptian lawyer Adel Abdul Bari, who has been fighting his extradition to the US for 13 long years.”

It seems that beyond the new development in the form of a private prosecutor who has put forward £20,000 to try Ahmad and Ahsan here in the UK, all avenues have been exhausted in trying to get the four Brits’ cases heard. However, whatever the case: whether the Crown Prosecution Service (CPS) or the Director of Public Prosecutions (DPP) accepts this proposal or not, the families of these prisoners are not going to give up the fight.

Ashfaq Ahmad confessed that there had been several moments of helplessness in the beginning, but it was his son Babar that had made him strong enough to continue campaigning. He asserted that if his son were to eventually get extradited, that “we are mentally prepared for it and will continue the fight [sic]”. Begg added that early on in his imprisonment, Ahmad had asked him for tips on how to survive the US prison system, and even Guantanamo if it came to that.

Throughout the evening the audience was treated to Talha Ahsan’s poetry recited by an array of speakers including Brit actress Manjinder Virk; award winning author A.L Kennedy introduced  ‘The Rose Garden’ by highlighting the injustice of his detention and stating five ‘terrible things’ he was guilty of: that he was a young active man, that he was Muslim, that he has Asperger’s, that he was actively spreading  the truth of the injustices in the world and finally, that he was a poet.

Just as the evening was drawing to a close, his brother received a note and with pride read out that Ahsan had won a Platinum award for his poem ‘Grieving’ in the Koestler awards (the highest Koestler award- Talha had entered into the Koestler Trust Award Writing Awards for prisoners.) Most of us left feeling a) hopeful and impassioned that we need to continue fighting this ridiculous law, and b) concerned that if they do get extradited, a precedent will be set. What’s to say we or our loved ones won’t be next?

Arts Against Extraditions Collective are behind the ‘Extradite me, I’m British!’ t-shirts and are calling on all fellow activists to buy and done the t-shirts for flashmob on the 15th of September.

First published on shahidulnews.com by samira quraishy on 16 September 2012