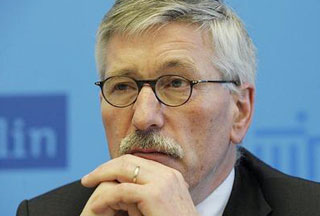 On Sunday, Thilo Sarrazin, former Berlin finance senator and currently a member of the German Central Bank committee called for a headscarf ban in German schools.

His comments come only four months after the official let loose against “Arabs” and “Turks” living in Germany in an interview with the culture magazine Lettre International.

“A large number of Arabs and Turks in this city, whose number has grown through bad policies, have no productive function other than as fruit and vegetable vendors,” he had said.

In his controversial remarks, Sarrazin also alluded to a new plan proposed by the country’s Immigration Commission, which would oblige foreigners seeking to live in Germany to sign “integration contracts” to respect Western values.

“I don’t need to respect anyone who lives off the state, denies the state, doesn’t do anything to educate their kids, and just produces more headscarf girls,” Thilo Sarrazin had said.

Following his disparaging remarks, the senior official has faced strong criticism, with many calling on him to quit.

On Sunday, Claudia Roth, leader of the German Green Party lambasted the executive board member, demanding his immediate resignation.

Islam is the third largest religion in Germany, but the European country has often been accused of hostility towards the faith.

Critics accuse the country of imposing discriminative laws on its 3.3 million Muslim citizens, such as the legislation passed in 2006 that banned teachers in schools and universities from wearing a headscarf.

In one of the worst cases of Islamophobic attacks in Europe, Marwa el-Sherbini, who was about four months pregnant, was brutally murdered on July 1 in a courtroom in the German city of Dresden despite the presence of police.

Marwa was suing her neighbor for insulting her and calling her a terrorist for wearing an Islamic head scarf.

While the incident has shaken the Muslim world to its core, the German state and media have ever since been in a state of denial.