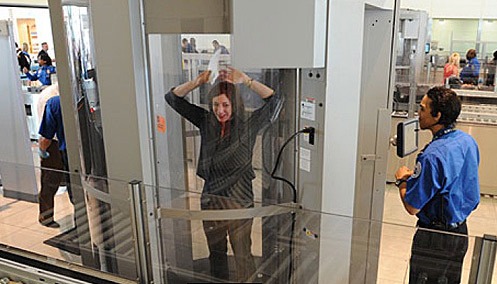 The IHRC is writing to express its deep concern over the use of body scanners at UK airports. On  1st February 2010, the then British government introduced body scanners at Heathrow and Manchester airports. The body scanners produce detailed images of a person as if they were unclothed on a computer screen.

The IHRC objects to the use of body scanners for the following reasons:

– The use of the body scanners violates Article 8 of the European Convention on Human Rights- everyone has the right to respect for his private life. Numerous commentators have described the procedure as an electronic strip search. During the scan, images with intricate details of naked bodies, including the outlines of women’s breasts and the genitalia of both genders, will be seen on a monitor by another person who could be male or female, sitting in a different room. German Security advisor Hans-Detlef Dau, a representative for a company that sells the scanners, admits that the machines “show intimate piercings, catheters and the form of breasts and penises”. The IHRC believes that the right to privacy includes the right to decide who views your body, whether in person or via images. The fact that the screener is unable to identify the passenger does not change the fact that he or she is viewing a near naked image of the passenger. By forcing the passenger to go through the body scanner he/she is being stripped of his / her privacy; his/her right to decide who takes and views images of him/her.

– Due to the explicit nature of the pictures that the body scanners create, the IHRC believes that the government will be breaching section 1 of the Protection of Children Act 1978, namely the prohibition against the taking of indecent images of children.

– The IHRC is also concerned by the government’s statement that:

There have been independent reports that the body scanner machines do in fact have the capability to save, store or print images.
http://edition.cnn.com/2010/TRAVEL/01/11/body.scanners/

During this year’s election campaign both the Conservative party and the Liberal Democrats discussed the issue of civil liberties. They correctly identified the massive encroachments in civil liberties under the previous government over the last decade and discussed how they would restore the freedoms Britain has always held sacred.

The document, “The Coalition: Our Programme for Government” states that the new government “will be strong in defence of freedom… restore the rights of individuals in the face of encroaching state power, in keeping with Britain’s tradition of freedom and fairness…  implement a full programme of measures to reverse the substantial erosion of civil liberties and roll back state intrusion… [and] introduce safeguards against the misuse of anti-terrorism legislation.”

These are commendable principles and it is pleasing to know that the new government is serious about civil liberties. If the Coalition government wants to govern by these principles it must abandon the previous government’s policy of destroying individual civil liberties and restore the rights of people to them.