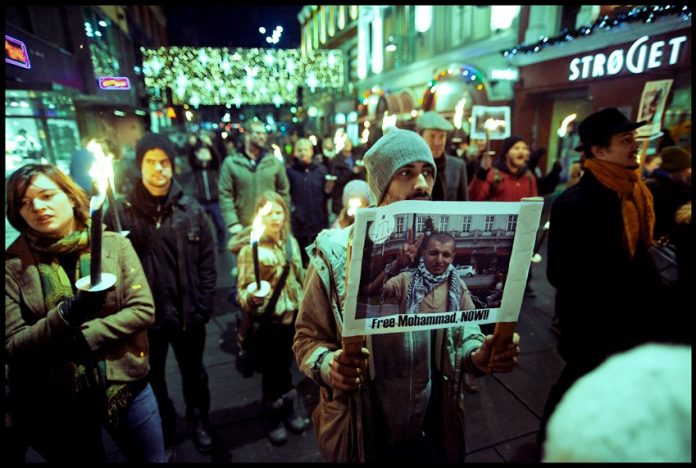 [3 December, 2011, for  background click here] After repeated attempts, we finally made an appointment with the police on Trandum, so that we can meet Muhammad. We do not get a time on Friday” and must wait for a phone call. They are calling from Trandum, and we learn that we have limited time for us. We immediately headed out of Oslo. The drive to Trandum is long and the prison is hidden and inaccessible. Outside we will call on the intercom system. We said we are here to visit Muhammad, and they unlock two large, high metal gates. Inside the prison we are told that it is not allowed to photograph or use a mobile phone, which also is clearly repeated in the form of signs on the walls.

We are led into a meeting room. The room is small and very sterile, white walls. In the middle of the room there are four chairs. There is a window on one wall, but the view is far from encouraging. Outside sees just a bare a large area, surrounded by barbed wire and metal fences.

… Eventually Muhammad entered the room. The door is locked from the outside. We are hugging each other and ask how he is. He is more interested to know how it goes with us in the camp. He stated that he is concerned about the camp, and says he does not get any information here. He says he is very scared and does not know what will happen.

He said he had been sitting quietly in a room on the first day. Drinking tea and watching TV. Suddenly five police officers entered the room and took his ID card. He was taken to a secluded room. A small cell. This is the room where he spends time. In the room he says that it is small, only a few square metres. The door is a thick with a small hatch that can be opened from the outside for communication. Beside the bed the room is completely bare. He says that his only source of light is a small square opening in the ceiling above the bed. The walls have no windows.

Furthermore, he says that he is not allowed to talk to someone in Trandum. If he wants to go out of the room to go to the bathroom, he must first ring a bell, like 10-15 times, only to be followed to the toilet. If he wants a glass of water, he gets it through the hatch in the door. The staff at Trandum have provided food for him, but he says he will not eat. He says that the times when the staff come with food, are the only times he has any contact with people here.

“Tell the people in the camp that they should not worry about Mohammad. I will not eat anything until I meet you again in the camp, “he says. Yesterday, he only drank water with salt. While talking with him, he has a cup of water in his hands. He says that this is the last cup he will drink until he drops out of Trandum and is back in camp.

We called the police, to ask if we can show Mohammad something from Facebook. It’s fine, as long as Mohammad does not use the phone to call someone, we are told. We show him the Facebook event for the torchlight procession on Saturday, the feature from the TV2 news. Photos from the demonstration after he was arrested. He says that he is very grateful for your support and all that will help him. We notice that he gets a good feeling to see this. He sees that he is not alone.

As we leave each other he smiles at us. He has hope, and there we go, he asks us to greet the others in the camp.

It is shocking that such places exist in Norway. Police on Trandum are wearing protective gear. The whole area is not unlike the occupied territories, and reminds many of an Israeli checkpoint. The meeting in Trandum is a very difficult moment, the worst so far in Norway.

Saturday 3 December is the torchlight vigil for Muhammad.