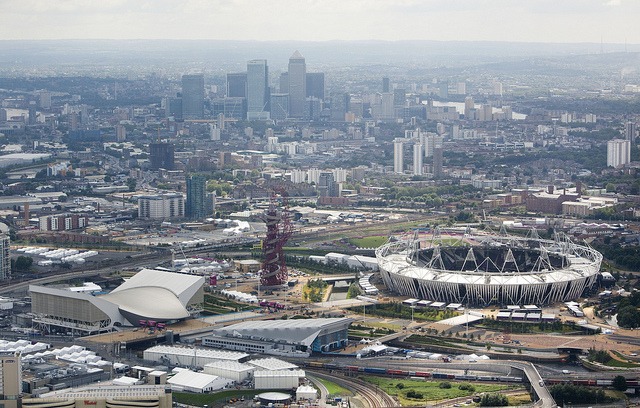 A fortress welcomes me as I alight from Stratford Station.  Which came first?  The plan for Westfield Shopping Centre or the Olympic Park?  The pair seem seamlessly moulded to fit, the distinction only that the economic and class barriers that keep ordinary Londoners out of the former are supplanted by physical barriers – security personnel, armed police and soldiers, and an enormous wall – at the latter.  This is London, and I am not happy.

It is well understood Olympic bid lore that the reflection of London’s ethnic and cultural diversity won the city this sporting accolade.  It trumped the Paris bid which had tried to ‘sanitise’ its filmic presentation of all ethnic traces.  Indeed Stratford and the London Borough of Newham’s diversity (Newham is one of two London boroughs with over 50% of its population from ethnic minorities) is represented in both of these monuments to the age: cleaners, stewards, bus boys and girls all hail from the locale, obediently and politely directing and serving the affluent and the privileged and cleaning up after them.  We are in an age of austerity, lest we forget, and those who have jobs – even those who work for free plugging gaps in the Olympic staffing – cannot afford to protest.  And so the demarcations deepen.

I drop off my daughter and her friend who have won tickets to an event.  I cannot walk them to the stadium, I must leave them at the wall that keeps the non-ticketed non-persons out of the Olympic Park.  Somewhere between disappointed and outraged, I watch them through the mesh as far as I can see them and go.  How must a local feel?  The much feted regeneration of one London’s poorest areas is symbolic only of the ever widening  gap between haves and have-nots.  I am not a local, so I may be wrong, but this regeneration and the wealth it brings does not seem to have meaningful impact beyond the already wealthy, except in the few menial jobs it throws the ways of those already living in these areas.  Someone please tell me I am wrong.

I can’t sit and wait in Westfield.  I am nauseated at the thought of even spending time in the arena of a former Israeli commando whose millions oft find their way back to the oppressor entity, or funding the promotion of US and Israeli foreign policy.  I look for a way out, but all roads seem to lead back only to the station to take me out of Stratford again.  I ask around.  “Is there anything like a High Road here or a park where I can sit down?”  The regeneration surely meant new public spaces and interconnectedness to the existing town infrastructure.  Cultural events across London are the talk of every Culture Show on TV, I looked forward to finding some local ones.  Blank faces from the stewards.  One directed me to a sofa outside of John Lewis, the other thankfully remembered Stratford Park, “But it’s a long walk,” he added.  “Best to get the DLR from Stratford International and get off at Stratford and walk.  But it’s a long walk from there too.”  And so I did, grateful for an escape route.  The DLR wound around the sturdy morass that keeps the undeserving poor out of the Olympic Park and its opportunistic sibling Westfield: each as imposing as the other.  No beauty or joy visible from the outside, just concrete and metal blankness.

Another surprise greets me as I leave Stratford station – the Stratford Centre, a pre-existing shopping mall.  The one I guess the ordinary people go to.  Perhaps, the argument originally went, the people of Stratford didn’t have enough shops.  As I turn into the Broadway, I see this is also not true.  High Street brands, chain stores and independent concerns line the way, with room for many more.  A pretty church stands at its centre.  The people walking here seem to belong to the area, and their day seems unaffected by the greatest show currently on earth a mile or so away.  A solitary cameraman wanders around looking lost.  Later I will see half a dozen in one walkway alone in Westfield seeking vox populae from ‘locals’ not to Stratford but the to the brand.  Will the international and national media even notice, or care?

En route to Stratford Park there are some individual and enticing eateries, worthy of promotion by any local council: Coffee Cream, Olympic Cafe are but two.  I ask if they have benefited from the Olympics.  They are (near) empty when I visit.  The people behind the counters are polite but not optimistic.

Stratford Park is hosting activities for the locals to celebrate the Olympics.  Kept out of the venues, even when so many seats are empty, they are to congregate at local public spaces.   Security greets me even at these gates, albeit of a lesser kind.  My bag is searched and I am let through.  I wander to the other end and see a niqab clad lady is scanned with a hand held scanner.  The park is also near empty.  Huge swathes of it are secluded behind white plastic fencing, I do not know why.  A large screen showing an equestrian event relays to the ten or so locals sitting on the lawn in front of it.  As many people again walk around.  The one or two children’s fun fair rides are silent.  Signs greet us on behalf of the Mayor of Newham.  It is quietly embarrassing.

I sit to read my book and realise that the equestrian event relay I hear behind me is neither from the local venue, or indeed special for the locals.  It turns one o’clock and we see that it is simply BBC coverage writ large for us.  Someone forgets to change the channel and Olympic coverage for the locals turns into the lunchtime news.

I sit away from the screen, alone on a bench and read half a chapter of a book on international aid and the hypocrisy of mainstream donor countries.  Ironic.  When I look up six police officers stand facing me.  I look behind me, but I am the only person there.  They stay for maybe another hour.  It is faintly amusing, no longer surprising and indicative of how the city and the country we live in works.  Fanon understood it well.  The poor and dispossessed sit within the realm of wealth and exploitation, and within this grouping the ethnic element is marginalised further.

I am glad, grateful even, that the Olympic branding does not feature Union flags or nationalistic symbolism.  My own London borough, Brent avoided supplying such to those lining the streets for the torch relay a few days back.  It bucks the jingoistic trend that media outlets have pumped for weeks, the sorry legacy of which we will have to live with long after the Olympics are gone.  (Re)claimed by the rise of the far-right in the last decade, the Union flag as with the St. George’s flag before it, again carries racist and supremacist overtones.  They do adorn the bags and t-shirts and backs of those attending the games and / or thronging at the altar of mega-consumerism nearby.  A proud Briton identifies in perverse ways – defining as wealthy or for those not fortunate to fall into that bracket, not ethnic.

Another flag greets me as I wend my way back to collect the children.  The flag of Israel flies at a road crossing.  “Why are the heathens amassing armies against the state of Israel(?)…” I think is what I heard from the bearer as I passed by.  Several homeless people now line the roadside en route to the station and the Olympic Park, while armed police and soldiers mingle with the crowds in the shadow of fortress Westfield keeping the poor and dispossessed, the non-deserving (oft ethnic) locals  out, and the wealthy safe from these hoards.  This is not a new vision of London.  The Olympics didn’t create a segregated London.  It has simply made physical the class, ethnic and economic barriers with walls and guns.   This is apartheid London, and yet people wonder why we riot. 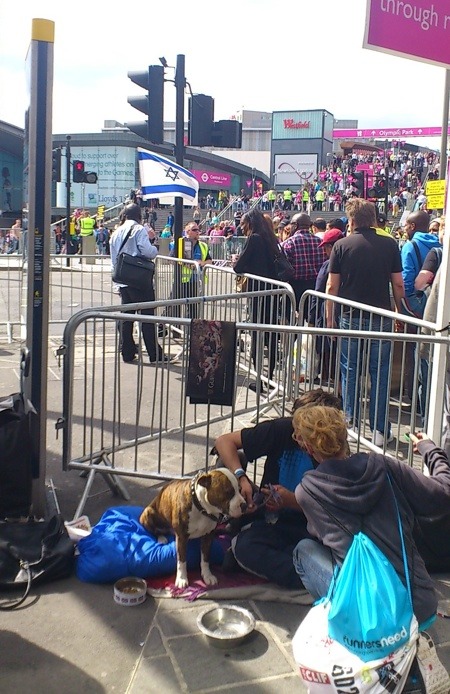 Arzu Merali is one of the founders of the Islamic Human Rights Commission.  She can be contacted on arzu@ihrc.org or Twitter @arzumerali