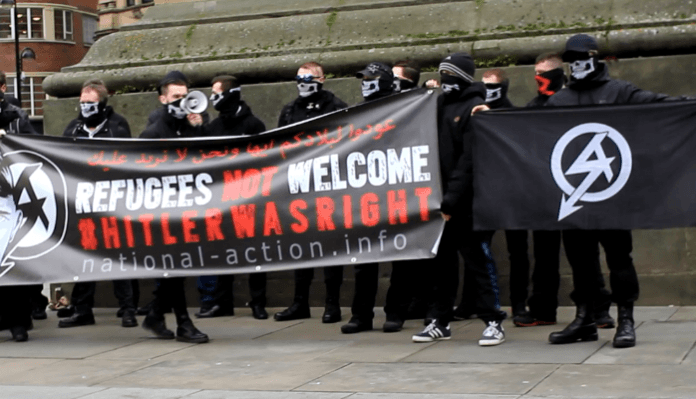 There’s an unnerving irony in the capture by police this week of four serving soldiers suspected of being members of a banned far right organisation.

For all the column inches and airtime devoted to the threat of domestic “jihadism”, not to mention the disproportionate official response to it, the arrests were an official acknowledgement that the threat of terrorism from the far right is just as real, and perhaps even greater.

The squaddies were apprehended for their alleged association with National Action, a white supremacist neo-Nazi group whose raison d’etre appears to be to prepare white society for a coming existential battle to save Britain from alien races.

Its hate-filled anti-Muslim, anti-semitic and xenophobic rhetoric has already inspired sickening violence on our streets. In January 2015, a far right fanatic shouting “white power” set upon 24 year-old Sikh dentist Dr Sarandev Bhambra with a claw hammer and machete as he shopped in a branch of Tesco in Mold, north Wales. Just a few hours earlier Zack Davies had posted an image of himself in a balaclava with a large knife and the flag of NA. Police investigations later revealed he had built up online relationships with members of the group.

Following the murder of Jo Cox in 2016 by far right extremist Thomas Mair, NA extolled his “sacrifice” saying that the Labour MP “would have filled Yorkshire with more subhumans.” It adopted, as a slogan, the only statement Mair made in court,“Death to traitors, freedom for Britain”.

Although NA was listed as a proscribed group later that year and 22 suspected members/associates arrested in 2017, the busting of a possible cabal in the armed forces raises worrying questions about the capability and reach of the far right as well as the official response to it.

The latest arrests are not of wannabe white warriors or lone-wolf copycats, dangerous as they might be. They are of hardened men trained to kill in the normal course of duty and whose threat therefore is magnified many times over. Indeed it is hard to avoid the conclusion that NA stands to become a more disciplined, organised and violent force as a result of military involvement.

The success of the far right in infiltrating the armed forces might also point to a deliberate strategy. The online Huffington Post claimed on Wednesday that it was aware of attempts by a former NA member to join the Army and Territorial Army, a claim that went unanswered by the Ministry of Defence.

WhileÂÂ  four arrests cannot tell us too much about the extent of far right penetration into the armed forces – three are believed to be from a single regiment – they should neverthelesss alert authorities to the possibility that there are many more terrorist sympathisers and activists in our barracks driven by a violent xenophobia that would certainly compromise their ability to carry out overseas missions and maybe even the security of the British public at home.

Certainly it should be enough to force the Ministry of Defence to launch an urgent probe.

“It is not just that they just talk about it, this is a group that venerates people that engage in violence, they train for violence… there is no question.”

Britain’s Muslim community, as the prime target of far right extremists, is right to be worried if soldiers are bringing military expertise to the ranks of NA. Last April the Sunday Times cited intelligence sources as saying that about 40 neo-Nazis were being investigated by police amid fears they are plotting terrorist attacks against Muslims around the country.

Terrorism statistics also suggest that far right extremism as a whole is on the march. According to government figures, one third of all people being referred to the Channel programme in 2016/17 – Channel forms part of the government’s PREVENT anti-terror strategy which seeks to identify people vulnerable to violent extremism and rehabilitate themÂÂ  – believe in extreme right-wing ideologies and are vulnerable to radicalisation. While the referral process has been criticised for giving expression to racist and Islamophobic attitudes these numbers do provide some indication of the scale of the far right problem, not least because the (white majority led) referrals are unlikely to be motivated by the same prejudices.

A report last year by a consortium of thinktanks led by Royal United Services Institute found that between the start of 2000 and the end of 2014 terrorist attacks by right-wing extremists acting alone accounted for 33% of all attacks while 38% were religiously inspired. It concluded: “The media, and consequently public attention, is largely focused on violent Islamist extremists; while this may reflect the broader threat, it is at odds with that from lone-actor terrorism. The research also found that right-wing extremists were responsible for substantially more fatalities.”

More worrying is the fact that 40% of lone-wolf right-wing extremists “were uncovered by an element of chance, as part of an investigation into other offences or because the perpetrator accidentally detonated a device, drawing attention to his or her activities. Although chance was also evident in some examples of religiously inspired terrorism, overall 88% of interventions were intelligence-led, suggesting a clear disparity.”

The inescapable conclusion from these and other findings is that the government’s obsession with using security legislation to transform social attitudes in the Muslim community instead of actually fighting terrorism is deflecting it from tackling the real danger presented by elements of the far right. Intelligence resources are being consumed by monitoring the members of a whole community for conservative views rather than apprehending the hard core of violent extremists, non Muslims and Muslims, whose bigotry feeds off each other.

When the far right’s poison has infected the military it is wishful thinking to assume that all our other national institutions are safe.