Open letter to Palestine Solidarity Campaign and their response 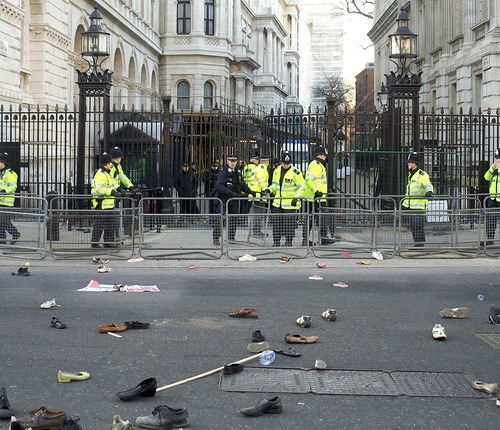 Please note, the original open letter drafted by IHRC to PSC and signed by various people can be read at the end of the page. PSC’s response is published here:

·PSC is very concerned at the arrest of two people at the protest outside the Israeli Embassy, and subsequent developments. The call for the national Palestinian flag only to be flown at the protest was a joint one, made in advance and publicised , by all the organisers, reflecting calls made by Palestinians to act in unity – to avoid factionalism and have a symbol around which everybody could unite.

·At the stewards’ briefing just before the protest, stewards were asked to request people attending the protest respected that policy and to use the flyers which set out the policy which had been agreed by the organisers. Stewards were specifically asked to contact the chief stewards if people refused, and not to ask the police to intervene. Calls were also made from the speakers’ platform to respect the joint call of the organisers, to reiterate that we wanted to send a clear, united, message of acting together under the Palestinian flag.

·At the protest, individuals who were flying different flags – from St George’s flags to Hezbollah flags – were asked to take them down by stewards. Most respected the call from the organisers, and took them down.

·Two people were asked on a number of occasion, by stewards to remove their flags. They refused. PSC stewards took no further action, and did not ask the police to intervene or arrest those flying different flags.

·PSC branches were informed at the PSC branch forum on 24 October about what happened.

·Our common goal – for freedom for Palestine – is what unites us. . As a movement, we have achieved an amazing amount when we have acted together, and our success in developing support for Palestine across all sectors of society is seen as a major threat by Israel. This is why we are under immense attack – from the British government challenging our right to speak out and organise for Palestinian rights, to attacks on our ability to increase pressure via BDS. Defeating those challenges, and strengthening our solidarity with Palestine, are more important now than ever.

We the undersigned are deeply concerned about events at last Saturday’s demonstration called by yourselves (17 October 2015).

It is reported that two long-time activists were harassed by other protestors, and ultimately arrested after being told by the police that the organisers and others had complained to them about the flag they were carrying. This came after:

The flag in question was the Hizbullah flag. At the time of writing we know that both of the protestors have been bailed pending a decision by the CPS on whether to charge them with supporting a proscribed organisation and encouraging others to support a proscribed organisation. When arrested they were questioned upon arrest by SO15 (the Counter Terrorism Command).

It has also been reported that police were asked by PSC to ask one of the men to remove banners in support of Palestinian prisoners from a previous demonstration.

As you are aware the anti-terrorism laws and regime are not only unjust, they have been used to target Muslims, and demonise some liberation movements, including some associated with the Palestinian struggle. This vicious curtailment of civil liberties, the removal of Muslims from equality before the law and the demonisation of political causes that run counter to UK foreign policy, are all surely things that PSC should at the very least eschew and at most actively oppose.

If these arrests have come as a result of the organisers’ request to the police, it is a matter of great shame for PSC. Those involved in making those calls from the platform and contacting the police should resign their positions forthwith.

As a note, it is worth recognising that the two men arrested have spent every other week over the last three years holding vigils for Palestinan prisoners. The conditions of their bail – of extraordinary disproportionality – prevent them from contacting each other, forbid them from going to demonstrations and require them to sign at a police station three times a week. It is truly disgusting that such committed pro-Palestinian activists and their activities have been stopped in their tracks. Whilst there is no legal case to charge and convict them under anti-terorrism laws, the threat that hangs over them is a form of harassment that has already had the effect of closing down regular pro-Palestinian protests organised by one of these men. As you are doubtless aware one of these men was one of the pioneers of BDS some fifteen years ago, and has suffered many threats and abuse from pro-Israel groups and indviduals.

Both these men should have been supported in their work by the organisers, not targeted. This sorry state of affairs has come through some level of instigtaion by the organisers. At the very least PSC must campaign for these two men. Please advise as to how you will be proceeding.