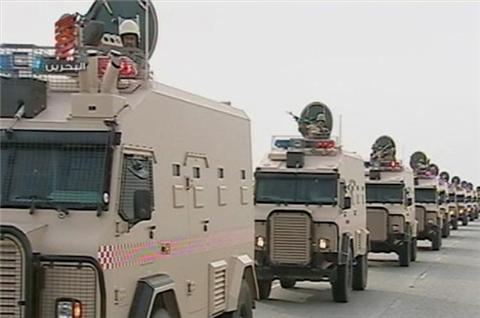 Scores of people have been killed and hundreds, including doctors and journalists, arrested in the Saudi-backed crackdown on peaceful protesters in Bahrain.

The following is a rough transcript of the interview.

Press TV: How have these annual rallies that we are seeing taking place, helping or influencing the Palestinian cause with the philosophy that the late Imam Khomeini put forward? Do you think that 30-years on, it has managed to achieve anything for the Palestinian cause?

Kazim: I think with the whole situation with regards to the issue of Palestine, one of the things we need to remember is that when the Egyptian revolution was starting to take place, the media analysis coming out of it was mostly focused on the impact this would have on Israel and the Israelis, instead of on the Egyptians. When you see the Western discourse in the media, it crystallizes the fact that it wants people in the Western powers to be interested in preserving what is in the Zionists’ interests.

Mainly, the US and the UK are at the forefront of that. It is for that very reason that a number of dictatorships that have been allowed to continue for so long, is precisely to make sure that the Zionist entity is not threatened. So, it doesn’t matter what its impact is on the people.

Then, the issue of Palestine and that it needs to be suppressed. The whole thing that Zionists have driven towards was that they wanted the idea of armed resistance against Israel to be crushed. They thought with courts and PLO’s coming into line, and etc. that it would have gotten things in the direction that the Israelis want.

With the issue of Quds being raised internationally, all of the time, it has taken a number of years for a lot of people to recognize that a lot needs to be done. Shahid Morteza Motahhari had called for the boycott, and asked people to remember the people of Palestine, and obviously this Quds Day has been essential in making sure that the issue of Palestine is not going to die, and with the advent and the influence of Hamas and the victories that Hezbollah has achieved, the issue remains.

And I think what we’re seeing is people are trying in the machinations that are going on with each revolution, the will of the people is going to be manipulated and that was the people of different countries really need to be careful about. We’ve seen the hypocrisy of Western positions with regards to the issue of Libya, Bahrain, and Syria. What they are trying to do in all of these different cases, it is something that needs to be kept in mind.

We talk about Palestine, and it has to be kept in this forefront. I think that certainly with the demonstrations that have been taking place in London, there were more people here at the Al-Quds demonstration than we have had in previous years. I think this is because people really feel strongly about what is going on in general. This is linked with other revolutions going on.

Press TV: Speaking of the Arab revolutions, do you think that the region is witnessing a new era in terms of relations now between Arab nations and Israel, considering these revolutions and the fact that on the streets people are showing strong anti-Israeli sentiment?

Kazim: When we talk about Arab revolutions, I think we need to mind that this expands across North African as well. Words being used by protesters on the streets are very important. I think, when they burn the Israeli flag, their intentions are very clear. We see that for many years, people are disconnected with the government in terms of what the government wants to do and what the people want to do. The people’s intentions with regards to helping the Palestinians are very clear.

For example, we see with regards to the issue of Saudi Arabia, we see their interest to send warship equipment to Bahrain, but when it comes to Palestine, we do not see the same interests to offer them defense. So, I think the hypocrisy of the regime of Saudi Arabia, with regards to how it is going to develop with regards to Yemen, Egypt, and so forth, is note worthy. Because what we are seeing is the hijacking of these revolutions or of what people want to be, to something that they do not want.