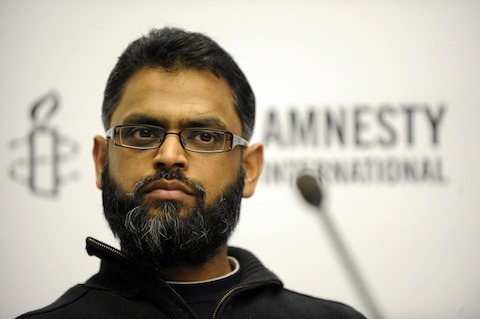 Begg, 45, was arrested in Birmingham along with three other men and is suspected of attending a terrorist training camp and facilitating terrorism overseas, a possible reference to Syria where he has recently carried out extensive civil rights and humanitarian work.

Although IHRC is not yet familiar with the precise details surrounding his apprehension it falls into a pattern of victimisation carried out by the authorities against the former Guantanamo Bay detainee.

Mr Begg was stripped of his passport by the Home Secretary in December last year after returning from a trip to South Africa. He had previously spent three years without charge in Guantanamo Bay as a prisoner of the US following his arrest in Pakistan in 2002. He is now a prominent campaigner with the anti-war on terror organisation Cage Prisoners.

Since anti-terrorism legislation started to be ramped up in 2000 IHRC has seen a consistent abuse of the powers it affords the authorities.  In June 2006 police conducted a counter-terrorism operation on a house in Forest Gate, London on suspicion that a chemical weapon was being produced by two brothers Abdul Koyair and Abdul Kahar Kalam. The latter was shot by police during the raid.

Security sources stated the operation was based on “intelligence” that indicated a viable chemical device with the potential of producing casualties in double or even triple figures was present at the house. No chemical weapon was ever found and both men were released without charge after eight days in detention.

IHRC is also concerned at the alleged double-standards of the British government which is one the one hand supporting the Syrian rebels politically and militarily against the Assad regime and on the other persecuting British Muslims who go there to help the opposition, even at a peaceful humanitarian level.

IHRC chair Massoud Shadjareh said: “As someone who knows Moazzam on a personal level and as a fellow campaigner and activist I am shocked by his arrest. He is far from an extremist and takfiri. As a matter of fact he has always a been a vocal critic of sectarian and takfiri elements.”