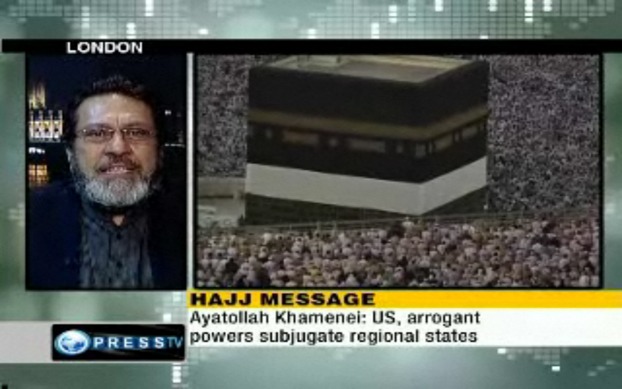 What follows is a rough transcription of the interview:

Press TV: Leader of the Islamic Revolution Ayatollah Seyyed Ali Khamenei congratulated the young revolutionaries and cautioned them to be aware of the plots hatched by arrogant powers. With respect to the Egyptian revolution, which was successful in February, but still in November the remnants of the previous regime are controlling the country, how significant is this advice?

Still the military is in power. Still – I checked even yesterday -there are numbers of people still banned from entering Egypt. These are Muslim Brotherhood, who are still scattered around the world and still there is really not an actual change. And we know also at the same time – those of us who are monitoring what is happening in Egypt – we are seeing that the powers of the United States and indeed Zionists and their agents are working 24 seven.

They are working really hard, they are using the media, they are attacking and trying to undermine Islam and Islamic organizations and Islamic political institutions. This is going to go on; people have to be aware. I mean indeed people are aware. When we look at situation of Gaza you know the Rafah Crossing really hasn’t changed that much. Still it is as difficult to get simple things – things like generators – into Gaza and still the same troops with the same sort of procedures and the same obstructions are there and implementing.

So there is a long way to go, but I actually also I think we need to recognize the role of the youth and the revolutionaries in Egypt and in all around the area how bravely they have actually stood up and indeed how they are still standing and they realize it very well that there is a long long way to go and there seems to be that commitment but they need to be encouraged, they need to be supported and indeed I think Hajj is sort of a time that you know in reality millions of people are gonna come together they are able to discuss issues and this is the topical issue.

The changes that are taking place and the obstacles to those changes and indeed, Saudi Arabia is one of the biggest local obstacles.

Let’s not forget that until 11th hour they were supporting Hosni Mubarak and even right now still they are putting pressure on Egypt to actually not go all the way and bring a real change so and Egyptians know that, the Yemenis know how obstacle Saudi royal family is and indeed in Bahrain people actually tasted their bullets and their tear gas and so really, the reality is it’s not just the change around but the fact that Saudi Arabia has been identified by masses as one of the greatest obstacles – local obstacles – as instigators of the interests of the United States and Zionism and I think that is why there is this wariness in Saudi Arabia among the police and security and religious police.

Press TV: Referring to our guest Imam Al-Asi’s comments that Muslims should be independent and not relying on the global powers, how significant is something like this if Muslims were able to implement such a strategy? How much of a threat would that be to what Ayatollah Khamenei called the arrogant powers of the world?

Masoud Shajareh: This is really the most that the arrogant powers are scared of and this is why they have actually made sure over the years they will control and pump up and they encourage and empower these tyrants and these dictators all around the Muslim world to sort of control the Muslim masses for their interest and for their power and for their hegemony.

Now the fact that they are being removed one by one is actually very important and very significant thing, but also what is significant is that those who are going to the streets are really the youth, who have much confidence in their Islamic and their independence than even sort of let’s say the established Muslim organizations, which have been sort of functioning for many years.

What you see with the youth in the streets is that they actually want to go all the way. They know and they feel like any Muslim the concept of unity, the concept of – you know – power that the greatest super power in the world Allah Subhanalah va ta’ala gives to individuals – to nations – to those who are united to go forward.

You know what happened in Tahriri Square was exactly the unfolding of this story and this power. How ordinary young people managed to actually overthrow this arrogant power and indeed this is the greatest message and I think what we need to do we need actually to make sure that this is going to be continuing because the struggle is not just one day, two days, three days. The enemy is actually committed all the way and indeed those youth and those rising up be it in Egypt, be it in Tunisia or be it in Yemen or anywhere else Libya etcetera they need to actually go back and get charged by that power of Allah subhanallah va ta’ala dependency on Allah rather than dependency on the United States, France or indeed Israel or anywhere else.

And that is really happening for the first time. After the Revolution in Iran we are seeing the unfolding of this. Confident to actually stand up and challenge the “Taghut” and it needs to continue and indeed as Imam Asi said the road is gonna be very hard – is gonna be very difficult – is gonna be a lot of struggle, there would be a lot of victories and probably a lot of setbacks, but what is important is actually not letting go of that valuable asset ie the confidence in Allah Subhannalah Ta’ala – the confidence in Islam – and moving forward independent of the Taghut.