Syria and the Line Between Imperialism and Humanitarianism

Home
Campaigns
Bahrain
Syria and the Line Between Imperialism and Humanitarianism 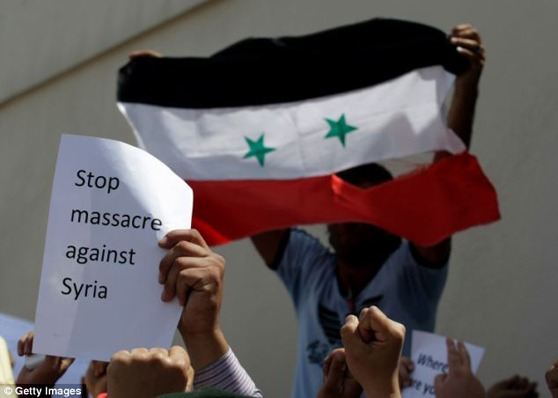 A member of the audience asked if it was time for action by the West against the Assad regime in Syria, after they had killed approximately three and a half thousand people.

The media commentator, Simon Jenkins, had earlier criticised a proposal by the British Medical Association to ban people from smoking in cars. On Twitter, they wrote about him that he “will defend his right to smoke in his car – but not defend Syrians being butchered”.

He argued that Britain should stay out of the business of someone else’s country and problem, which prompted accusations of a “basic lack of compassion for the thousands butchered by the Syrian government. Unbelievable” – and even nimbyism: “Not my country, not my kids, not my problem. Thatcherism personified.”

He argued that well-meaning calls for humanitarian intervention have been the call of imperialists for years. But some disagreed – using unrepeatable abuse that “the world intervening to stop dictatorial murder is not imperialism”.

Whilst, I can respect and even admire the human compassion behind the original question and these criticisms, I think these critics have misunderstood the argument made against Western intervention – an argument that Mr Jenkins has made repeatedly in his columns – and one I wish more people would agree with.

The idea that you are either in favour of liberal intervention or an appeaser of tyrant regimes is far too simplistic.

I despise the Assad regime. Earlier this year I was part of a demonstration of two to three thousand men and women outside the Syrian embassy of in London, at a time that William Hague and Hillary Clinton were arguing that Bashar al-Assad still had the capacity to reform, despite his security forces having killed hundreds and a past record soiled by abuses of power. It’s appalling record long predates this year’s massacres. In 1982, Bashar’s father, Hafiz al-Assad massacred an estimated 20 000 – 40 000 civilians in the city of Hama.

There was no talk of foreign intervention then. Many of these were non-violent Islamic activists, including from my own party, Hizbut-Tahrir.

Yet, despite despising this regime and actively opposing it, I also oppose the idea of Western intervention. This is a viewpoint many others will share.

Of course, there will be some who will desperately hope that countries that formerly backed Assad will switch sides for the ‘people’s sake’. But if they do turn against him, we can be sure it will not be for the sake of the people.

Yet, amongst those who I know personally are against Western intervention are some exiles and ex-victims of torture by the regime

The statements made on the BBC programme about humanitarian intervention being the call of ‘imperialists’ and to ‘mind ones own business’ are not shallow and not necessarily selfish or heartless.

Sadly, a review of international politics and history justifies both allegations.

The politics is simple to understand – states don’t generally sacrifice their troops and millions of pounds for humanitarian reasons alone. If they did, we would have seen a proportionate financial commitment to the Pakistan floods from the British government to the intervention in Libya. Why one, and not the other?

If states supported military intervention for purely humanitarian reasons, we ought to have soon troops mobilized to Zimbabwe, Rwanda, Kashmir, Chechnya, Congo, Bahrain, Uzbekistan, Yemen, Occupied Palestine and elsewhere by now – but we have not. And there was no talk of troops to help in Gaddafi’s Libya and Assad’s Syria before 2011 despite their records. There might have been a humanitarian argument for all of these situations but intervention would simply not have been in accordance with political and commercial interests.

The history is tragic: that, on balance, when looking at the cases of intervention in Afghanistan, Iraq and Libya over the past ten years, the result has been overwhelmingly negative. If, indeed, thousands were saved in Libya, hundreds of thousands have been directly or indirectly harmed by the other interventions. Stable regions – suffering under oppression or corruptions – have been destabilised.

British people are like most others. They long to have some degree of trust in their political masters. Consequently, they view the actions of their political masters trusting that they are based on good intentions and well thought out plans, rather that on a calculation of interests that has proved to have done more harm than good.

But they would do well to look at the facts. Like, for example, the fact that Britain was selling arms to the same regimes it was fighting against and denouncing only weeks before the policy change.

The Telegraph columnist Peter Oborne recently made a similar observation after a visit to North Africa. He cautioned the West against intervention if Islamic regimes started to emerge, citing the French backed military intervention in the 1991 elections in Algeria, which opened the door to civil war.

It is a sad lesson that more people could do with learning – that governments will manipulate public opinion and the caring attitudes of citizens who watch unchallenged tyranny for their interests – and sacrifice other people’s children – when it serves their interests and not for humanitarian reasons.

Whilst the arguments expressed on Question Time might have been a little clumsy, they were basically correct, and I wish more people saw the world as it is, and not how they would like it to be.

Dr. Abdul Wahid is a regular contributor to New Civilisation. He is currently the Chairman of the UK-Executive Committee of Hizb ut-Tahrir in Britain. He has been published in The Times Higher Educational Supplement and on the websites of Foreign Affairs, Open Democracy and Prospect magazine. He can be followed on Twitter @abdulwahidht or emailed at abdulwahid@newcivilisation.com