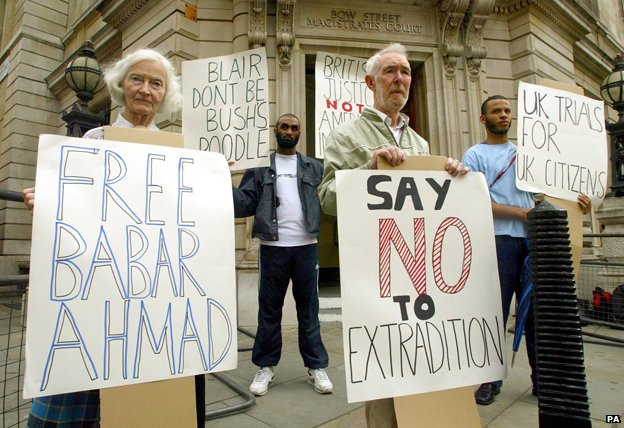 This morning a US judge had sentenced two activists to time served in the case of Talha Ahsan and to just another few months longer to go for Barbar Ahmad. Our hearts go out to the two brothers and their families. It has indeed been a long and arduous journey. Talha Ahsan can indeed be proud of his brother Hamja Ahsan. They have indeed learnt who their friends are. The Islamic Human Rights Commission (IHRC) can surely be counted as a blessing in this and many other similar matters with which the IHRC deals with on a daily basis.

However, the case has revealed the duplicity in the political class. The current Home Secretary politicised the extradition of Talha Ahsan at a Conservative Party Conference. She had burnished her Tough Lady image with the case of the two activists and some others. It might be useful to note that the Abu Qatada case, as unwelcome as I find the views of Abu Qatada, had also resulted in an acquittal in Jordan recently. The Lady extradites on frivolous grounds one might add. However, it is an extremely serious decision for a government to extradite its citizens to another country, especially when it does not have the ground to pursue a case through its own criminal justice system. It then extradites the citizen to another country where the presumption of innocence is less likely. Moreover, it is a matter of concern that a governing class, which celebrates the separation of powers between the judiciary and the executive, finds ways to circumvent the judicial process when judges make inconvenient decisions. What is worrisome is that not all judges are prepared to look at the evidence. It took judge Janet Hall to tell to US prosecutors that if the two activists were guilty of aiding and providing material of support to Osama bin Laden by publishing his declaration of war on their website then so should the mainstream media including the newspaper of record in the USA. This case has exposed the diarrohea of some judges in Europe when it comes to resisting the erosion of the rights of citizens by their governments.

The case also exposes the duplicity and Islamophobia of the political class when it comes to Muslims. We celebrate the decision of the Tough Lady when it came to the decision not to extradite Gary McKinnon on the basis of his Asperberger’s syndrome condition. What will follow does not in any way dilute our joy for him and his family and friends. However, it brings into sharp relief the institutionalised racism of the political class. Talha Ahsan also has Asperger’s. However being Muslim with Asperger’s is a justification for extradition whilst if one is not Muslim then it can be a mitigating circumstance. There are those who say that Islamophobia is but paranoia on the part of Muslims. This case demonstrates the political legitimacy given to institutionalised Islamophobia. Very few are prepared to tackle this issue because it is a career limiting move and does not play very well with the marginal constituencies. Destroy the lives of a Muslim here and there and you are likely to see an improvement in your political fortunes. That is the name of the political game in this country as is elsewhere in Europe.

The media claims the right to freedom of the press on the basis that it should inform the public about what is being done in their name and hold those in public office to account. In fact their conduct in this trial exposed the difficulties in believing their commitment to press freedom. Many mainstream media organisations, on the contrary, have proved to be voices for power. They do not go to the dark corners where people suffer the effects of political and economic power. No, they switched off the few lights that remained. The political class could not get away with these extraditions if the mainstream media cared enough, with the very few exceptions of course.

A worrying implication of this case is the rather slight basis of the cause for the extradition. An unsolicited e-mail from the USA led to their nightmare. A whole generation of young activists is being lost due to their enthusiasm to put an end to the indignities that are being heaped on Muslims everyday and everywhere. Whereas their peers go to southern and eastern Europe to get drunk they decide to go to theatres of war to fight in places like Syria, Iraq and Libya, and then they either die or upon their return are arrested for engaging in acts of terror despite their motivations being consistent with those of the Foreign Office. It might help to note from Islamic history, the case of Nuaym ibn Masood from Bani Ghatafan. He was a playboy with strong links with Banu Qurayzah. During the battle of al-Ahzab he became a Muslim and wanted to fight on the side of the Muslims who were besieged from all sides (See Surah al-Ahzab [33]). However, the Prophet asked him to stay on the other side and to use his connections to support the struggle of the Muslims. The details can be found in the Seerah. What matters is that Nuaym ibn Masood was encouraged to work on the side where power was being exercised. That is a reality that many of our young people are missing. We live in a country that is a member of the UN Security Council, NATO, the Commonwealth and the EU. Getting carried away with unbridled enthusiasm and indignation can lead to poor decision-making.

We have to hold our government, the political class and mainstream media to account. We have structures like the Islamic Human Rights Commission which have been involved in this case and they need the skills and contributions of volunteers. Follow in the footsteps of Nuaym ibn Masood and Abu Dharr and lift the veils of complicity in the injustices that one finds in virtually every place where Muslims are on the receiving end. In building structures of resistance in the citadels and metropolis of power we will institutionalise dissent. There are many issues where common ground can be found with activists in our local areas. In linking grassroots struggles in our villages, towns and cities with the broader roles played by the political and economic class narratives of resistance will emerge. One cannot separate the struggles in places like Palestine, Yemen, Egypt, Libya, Somalia, Pakistan, Kashmir, India, Indonesia, Malaysia, Burma, Latin America from the struggles against neoliberalism, neo-colonialism and imperialism. Our struggles are but parts of a broader struggle for justice. Talha Ahsan and Barbar Ahmad were a bit younger when they started out and they have learnt a lot. One hopes that when this is all done and they have had time to rebuild their relationships with their loved ones that their experiences will not be lost to the broader struggles. There is a generation of young people who need to learn from them. As for the family one also hopes that they too will not retire despite the huge cost that had been exacted from them. Many families can learn from them. In that way we build a movement. Our responsibility is to build a grassroots movement of, and for dissent.