The One Where Hillary Supports the Dictators in Bahrain 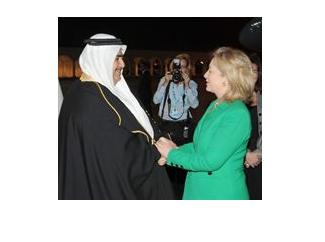 It’s like a surreal followup to Friends.  The US government is ever loyal to its friends.  Umming and ahhing over Mubarak and Ben Ali, now proffering unstinting support to the Khalifa clan in Bahrain.  You couldn’t make it up and as a screenplay of any sort – comedy, tragedy or both, it surely wouldn’t pass muster, yet here we are again, Hilary Clinton trying her best to use the modern media to peddle the unending lies that prop up US foreign policy.

Unlike Egypt and Tunisia, Bahrain’s Day of Rage is part of a structured long running movement for political reform.  It is a movement that has seen the absolute monarchy ‘transform’ into a constitutional one after the deaths, torture and imprisonment of a multitude of activists through the 1980s and 1990s.  One of that movement’s leaders, Shaikh Abdul Amir al-Jamri, was adopted by IHRC as a prisoner of faith when the organisation was set up.  One of the reasons for adopting him as such, as the persistent lack of interest in him from western governments, despite his civil rights campaigning.  A Muslim cleric, he suffered from the Islamophobia that would soon engulf mainstream discourse.  The movement, now diverse and multi-confessional, left after his death, suffers the same fate.  Largely religious in demeanour and expression, they fall easily into the stereotypes of ‘Islamist opposition’ that conjures up images of the Twin Towers ablaze, London’s underground strewn with corpses etc.

Sheikh Al-Jamri’s history gives a timeline of the dictatorship.  Its discriminatory and autocratic zeal evidenced in their repeated arrests of Jamri and other Shia activists, who hail from the country’s majority.  Despite repeated claims that the movement is non-sectarian, evidenced in current times by the multiplicity of sectarian, philosophical and political groups working together for change, the al-Khalifas have manipulated a sectarian agenda to promote themselves as Sunni protagonists in an age old internecine Muslim battle. Of course it helps that its US and Saudi backers want to crush any kind of possible pro-Iranian movement.  The Shia card in the context of a classic divide and rule strategy has until now been well played by the Al-Khalifas.  The Al-Khalifas sops to democratic discourse in 1970s and then again the noughties, and its betrayal of its people saw them suspend parliament under the Emir in 1975, leaving Jamri, an elected MP increasingly vociferous in his criticisms of the regime.  He was one of many arrested, detained without charge or on trumped up charges and tortured.  He was released from a near three year detention in 1999, after the Emir’s death and pardoned.  In 2002, the new king declared Bahrain a constitutional monarchy.  Little of any type of constitution followed.  But torture and imprisonments, killings of protestors followed again aplenty.

Structural impoverishment of the Shia majority, discrimination at all levels, as well as the lack of political representation of any meaningful sort for all Bahrainis regardless of sectarian or confessional affiliation, were the mainstay policies of the Al-Khalifas.  So long as the oil flowed and the military bases set up, there was little criticism if any from the US and UK.

These longstanding issues have been added to in recent years, by the doctored demographics of the small state.  The ruling family have offered citizenship to non-Bahrainis of Sunni affiliation.  Those being naturalised are offered preference in various professions over Bahrainis with similar qualifications.  Bahrain’s police forces have been developed using this model, with a mix of mercenaries and those taking the opportunity of financial other privileges for them and their families.  The result has been seen in recent days with the Pearl Square massacre – police force with less qualms than their Egyptian counterparts to open fire on unarmed civilians.  The bonds of citizenship are not there, the appeal of ongoing privilege and pay enough motivation.

This brutality is neither a shock for those Bahrainis on the street or the regime’s supporters.  All of this history after independence in 1971, comes with good helping of US and UK support.  Ian Henderson, the Butcher of Bahrain, headed Bahrain’s security services for 30 years, retiring in 1998.  His pedigree is all British, having been implicated in torture at the behest of the British during the Mau Mau uprising in Kenya, he returned to Bahrain in 2002, after threats of legal actions being brought by torture victims, made his retirement in the UK precarious.

Henderson, despite his atrocities is a distraction.  It is his political master – the al-Khalifa family, are the bullyboys left in charge after the departure of the British in 1971.  Bahrain’s ‘independence’ however has been characterised by an effective all but in name colonisation by the US, whose fifth naval fleet is based in Bahrain.  Indeed speculation that Bahrain may be the base for an attack on Iran has been rife for over a year. With over 2,000 personnel in Manama, the current uprising, if successful, will be the first revolution to directly affect the US’s military presence in the region.

President Obama has castigated Iran in recent days, claiming perversely that Iran should allow its people expression of their grievances as Mubarak did in Egypt.  Democracy Now! flagged up the implication that the US leader made, that the Egyptian regime did not attack the protestors that eventually saw the erstwhile president’s political demise.  Over three hundred were killed in the 18 days that brought down Mubarak, hundreds more disappeared.  Claims of torture flagged up by Amnesty International.  It sounds in fact less little like events in Iran at the moment, and more like events underway for the last three decades in Bahrain.  On a recent trial observer mission to Bahrain IHRC’s Abed Choudhury and the England and Wales Human Rights Bar Committee’s Pete Weatherby met with senior police and security figures.  When shown pictures of an injured detainee, Captain Isa Al-Qattan, a senior police officer in Manama claimed the pictures were ‘photoshopped’.  Choudhury noted in his report:

“I am impressed by the commitment that the government has to the democratic path that Bahrain is walking on,” Clinton said. “It takes time; we know that from our own experience. There are obstacles and difficulties along the way. But America will continue working with you to promote a vigorous civil society and to ensure that democracy, human rights and civil liberties are protected by the rule of law.”

At the time she made this statement, dozens of activists were in prison, including Dr. Abduljalil Alsingace.  Alsingace was in London over the summer of 2010, taking part in a seminar at the House of Lords on the ongoing saga of human rights abuses.  I met him at the IHRC fundraiser, just before he was due to return to Bahrain.  He was happy – very happy in fact – with the title of Omar F. Ahmed’s soon to be released report  BROKEN PROMISES: Human Rights, Constitutionalism and Socio-economic Exclusion in Bahrain.  “It sums it all up,” he smiled.  A well known civil society activist, Alsingace was often seen at demonstrations in his wheelchair to which he was often confined.  His detention, as soon as he arrived back in Manama, was a shock.  Able to periodically send messages to his family, he has claimed he was tortured, denied medical treatment and abused in several ways.  Crippled by polio, Alsingace is paralysed completely in one leg.  Of the many tortures he described, was being kept in a standing position on his paralysed leg continuously for two days.  In her silence, Clinton actually voiced her support for this destruction of life and dignity.

This appears to be the civil society and democracy the US wants in Bahrain, and so too it appears in Iran.  Iran’s situation is unlike those in the Arab states in turmoil.  Yet the demonization of the Islamic revolution – the epitome of racist and Islamophobic representation means- even civil society, especially the twittersphere, refuses to acknowledge the difference: the names of the dead (killed by protestors in the main, not security forces) or even the fact that the imperial US hegemon and Tel Aviv support the protestors.  Whether we like it or not, Iran is a version of where regional revolutions could go, or not, but it is three decades ahead of its brothers and sisters, struggling for independence from US hegemony, redistributing wealth and empowering its citizenry.  They can and should be held to account for their failures, but then we need to be honest about their successes too.  The same racism that makes us distrust or prevents many of us from sympathising the hijab clad protestors in Pearl Square should not also inform our critique of the Iranian government or any of the Islamic elements in Tunisia, Egypt, Yemen, Libya and elsewhere in the region.  If we persist in uniformed (aka CNN / BBC) activism, whether over Bahrain, Iran, Iraq, Algeria, Morocco et al, then like Clinton, we will end up being complicit in new oppressions, as nascent political movements and projects are crushed on the pretext of anti-Islamism.

Arzu Merali is a writer and mother based in London, UK.  She is one of the founders of Islamic Human Rights Commission.