In the face of increased raids and stops and checks in public places by police on people though to be illegal immigrants, IHRC is reposting advice from the Anti-Raids Network for all those affected or concerned about the stops.

What to do if you see someone being stopped

If you see someone being stopped by UKBA officers or police on immigration grounds, and your immigration status does not put you at risk yourself, it is recommended that you:

– If the person doubts you, advise them to ask the officer if it’s true – immigration officers are meant to tell people this themselves before stopping them

– Remind the officers of the law

– Film the incident, where possible asking the person stopped if that’s
ok, or just filming the officers involved. This may be useful in making a
claim in the event of an unlawful stop or arrest.

– Record the lapel numbers of the officers involved

– Make other members of the public aware of what’s happening

– Attempt to pass on a phone number to the individual if you think the
stop will lead to arrest. Possible useful numbers include Soas Detainee Support: 07438407570 or Bail for Immigration Detainees: 020 7456 9750

– Note that physically obstructing officers may put you at risk of arrest for obstruction (a minor offence).

If you want to refer to their guidance when speaking to Immigration Officers, everything can be found in the Home Office Enforcement Visits guidance (formerly,  Chapter 31 UKBA Operational Enforcement Manual).

Protect yourself, defend your friends and neighbours. Share, download and distribute our, double-sided cards on what to do during immigration raids (updated March 2017). 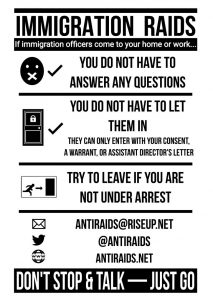 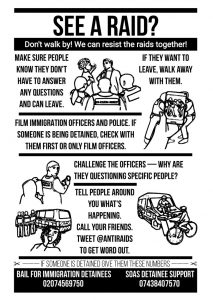 Originally published on the Anti-Raid Network website here. Posted by IHRC for information purposes only. For more information please refer to the original site. This page was updated on 29 January 2021.