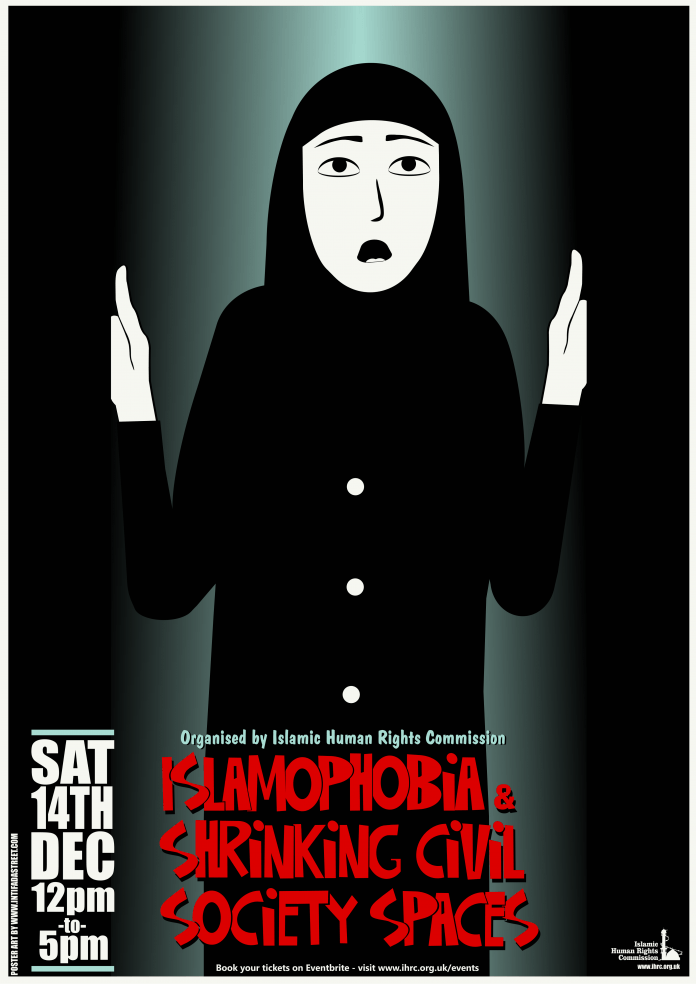 The sixth annual IHRC Islamophobia Conference will discuss the different ways the civil society space has shrunk, with a particular focus on Muslim civil society organisations and how Islamophobia is driving much of this. The event will be held concurrently in London and Glasgow and both are co-organised with SACC.

Reserve your space on Eventbrite

Lunch and refreshments will be provided. By attending this event, you are agreeing to being filmed as part of the audience.

In an increasingly polarised world, we see individuals and groups retreat into their ideological clans and assert their views as forcibly as possible. We see this with the rise of populist leaders from Hungary to India, in Trump’s “make America great again” mantra and the pro-Brexit camps ever more frenzied insistence of leaving the EU irrespective of the costs to the people, economy or institutions of the UK. Each group pushes their agenda at any costs, attacking, and suppressing if necessary, all those who oppose them.

As a result, the discourse in every area of politics has become toxic, amplified by the echo chambers of social media and reinforced by partisan media outlets. What is particularly worrying in these circumstances is the relationship between powerful groups who are able to influence state policy and media narratives and the minority communities they seek to silence. Whether it is the demonization of immigrant communities in America, religious minorities in India or pro-Palestinian NGOs promoting BDS in Germany, we see a consistent pattern of powerful groups using the state, media and group violence to silence and suppress those they oppose.

The common factor in these attacks against Muslims operating in the civil society space is the attempt to delegitimise them all by way of measuring them against loaded definitions of extremism, an approach that is actually more successful in revealing the Islamophobic leanings and biases of those leading the attacks. It is character assassination dressed up as research. The end aim is clearly to panic wider society into reconsidering their associations with Muslim organisations that are being targeted. To this end we have seen them target legitimate Muslim organisations for their accreditation with international bodies, for research commissioned by major institutions, as well the status of organisations in relation to the charity commission and other regulators in the UK.

These campaigns are conducted with the aim of creating a hostile environment for Muslim civil society organisations, and unless challenged, the Islamophobic ideas that underpin these campaigns will become normalised. Political actors and groups need to urgently consider the direction of travel and the precedents set by the above as they determine what type of society we have already become, but also indicate a future where political space and the possibilities for social transformation have shrunk enormously.  At the same time, we are already looking at upsurges in street level violence as well as far-right mobilisation, and the shift in all respects of political discourse to nationalist and populist policies.

The direction of travel is more than worrying.  Urgent action needs to be taken by political actors and parties.

The Shrinking Political Space for CSOs In The UK

Doors open 10.30 for a prompt start at 11am (times may be subject to change, please check for updates).

The Conference will discuss the ways that civil society space has shrunk and how Islamophobia is driving much of this.

The common factor in attacks against Muslims participating in civil society is the attempt to delegitimise them by measuring them against loaded definitions of extremism. It is character assassination dressed up as research. The aim is  to panic society into reconsidering its association with Muslim organisations. Unless challenged, the Islamophobic ideas underpinning these campaigns will become normalised.

The full programme and list of speakers will be published later.

Prior registration is strongly recommended. We’re suggesting that  attendees make a small financial contribution (we suggest £3- £10, according to means). Free for people aged 16 or under and asylum seekers (but please register).