Arizona Bans Ethnic Studies and, Along With it, Reason and Justice

Home
Uncategorized
Arizona Bans Ethnic Studies and, Along With it, Reason and Justice 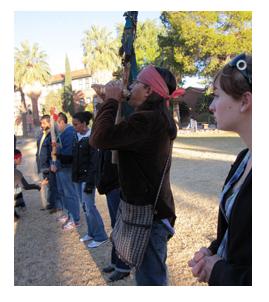 Ceremonial sounding of the conch shell to welcome participants to the Tucson conference organized by Professor Roberto Rodriquez at the University of Arizona December 2-4, 2010, devoted to addressing issues related to Combating Hate, Censorship and Forbidden Curriculum. (Photo: Leslie Thatcher)

While much condemnation has rightly been expressed toward Arizona’s anti-immigrant law, SB 1070, a less-reported and potentially more sinister measure is set to take effect on January 1, 2011. This new law, which was passed by the conservative state legislature at the behest of then-School Superintendent (and now Attorney General-elect) Tom Horne, is designated HB 2281 and is colloquially referred to as a measure to ban ethnic studies programs in the state. As with SB 1070, the implications of this law are problematic, wide-ranging and decidedly hate filled.

Whereas SB 1070 focused primarily on the ostensible control of bodies, HB 2281 is predominantly about controlling minds. In this sense, it is the software counterpart of Arizona’s race-based politicking, paired with the hardware embodied in SB 1070’s “show us your papers” logic of “attrition through enforcement,” which has already resulted in tens of thousands of people leaving the state. With HB 2281, the intention is not so much to expel or harass as it is to inculcate a deep-seated, second-class status by denying people the right to explore their own histories and cultures. It is, in effect, about the eradication of ethnic identity among young people in the state’s already-floundering school system, which now ranks near the bottom in the nation.

There’s a word for what Arizona is attempting to do here: ethnocide. It is similar to genocide in its scope, but it reflects the notion that it is an ethnic and/or cultural identity under assault more so than physical bodies themselves. By imposing a curriculum that forbids the exploration of divergent cultures while propping up the dominant one, there’s another process at work here, what we might call ethnonormativity. This takes the teachings of one culture – the colonizer’s – and makes it the standard version of history while literally banning other accounts, turning the master narrative into the “normal” one, and further denigrating marginalized perspectives. America’s racialized past abounds with such examples of oppressed people being denied their languages, histories and cultures, including through enforced indoctrination in school systems.

As if to add insult to injury, HB 2281 barely makes a pretense to hide any of this in its language and intended scope. A close reading of the law lays bare some of the more stark and sinister aspects of its potential application in a state where Hispanic students fill nearly half the seats in the public schools (the domain to which HB 2281 will apply). In particular, there are three primary aspects of the law that merit further investigation as contributing factors to the ongoing erasure of ethnic identities and the further marginalization of people of color in Arizona.

First, there is the perverse Declaration of Policy preamble, in which the legislature expresses its intention that pupils “should be taught to treat and value each other as individuals,” and likewise, “not be taught to resent or hate other races or classes of people.” The irony here is palpable, since SB 1070 precisely singles out “races or classes of people” in its coded language, requiring police to demand legal papers from anyone who is deemed “reasonably suspicious” of being undocumented – which, in the Southwest, obviously correlates with skin color and ethnic origin. Moreover, HB 2281 itself was aimed specifically at abolishing the Raza studies program in Tucson (as well as all ethnic studies programs statewide), which translates literally to “race” as noted in the working definition adopted by the program at San Francisco State University:

“The term Raza literally means race or colloquially, the people. The term figuratively has reference to the Spanish conquest of the indigenous Indians of Mexico and the resulting mestizaje or the mixed racial and ethnic identity of indigenous, European and African heritage unique to the Americas. In practical usage, the term Raza refers to mestizos or mixed peoples; we have the blood of the conquered and conqueror, indigenous, (i.e., Aztec, Mayan, Olmec, Yaqui, Zapotec and numerous other Native Americans), European, African and Asian. The term Raza was popularized by Mexican educator, Jose Vasconcellos who wrote about La Raza Cosmica to inclusively refer to a new ‘race’ of people born out of the neo-Columbian New World.”

In this sense, we come to perceive the aim of banning ethnic studies as an attempt to single out the histories and cultures of certain people based expressly on race and class. While the Arizona legislature states its intention to prevent resentment and hatred of others, the new law fosters precisely that and, in denying people their histories, further encourages self-hatred as well. Indeed, people kept from knowing where they come from have a difficult time knowing where they are going, creating a self-fulfilling downward spiral that is common where people are categorized and labeled as “other” and/or “lesser” vis-à-vis the dominant norm. As such, we see that HB 2281 actually violates its own provisions by promoting that which it claims to eliminate.

The second critical aspect concerns the law’s main prohibitions against any education programs that (1) “promote the overthrow of the United States government,” (2) “promote resentment toward a race or class of people,” (3) “are designed primarily for pupils of a particular ethnic group” and (4) “advocate ethnic solidarity instead of the treatment of pupils as individuals.” The problems here are manifest, starting with the reflexively implicit link to terrorism contained in the first provision – as if to say that ethnic solidarity is somehow akin to attempting to overthrow the government. The third provision is even more problematic in its potential implications, since a plausible argument can be made that the entire mainstream public education curriculum is precisely designed for pupils of a particular ethnic group – namely the dominant, white, Eurocentric group that defines its history and worldview as the “normal” or “standard” ones against which subaltern perspectives are to be judged as deviant and, under HB 2281, banned.

The fourth provision does double duty in prioritizing individualism over group-centric processes, reflecting another deeply-rooted cultural bias and projecting it back as the norm. The libertarian and individualistic foundations of Western culture are viewed as iconic in Arizona, and it is no coincidence that the more communitarian impulses of Raza peoples are denigrated as politically dangerous and pedagogically bereft. Again, the worldview of the oppressor is normalized in its rugged individualism and attempts to break down any movement toward solidarity and unified action among people of the disfavored class. This also expresses contemptuous judgment toward solidarity-based movements grown in the Western world, including the rise of union organizing, anti-globalization and antiwar activism and the mobilizations of people against totalitarianism in the Eastern bloc nations. What the Arizona legislature completely fails to grasp is that individual identity arises out of cultural consciousness – in other words, that it is ethnic solidarity in itself that provides people with the grounding necessary to know who they are as individuals.

Finally, HB 2281 contains an exemption for teaching students about episodes such as the Holocaust; genocides; and “the historical oppression of a particular group of people based on ethnicity, race, or class.” In essence, combined with the provisions noted above, this means that students of a particular group can be taught about their history of subjugation, but not about their spirit of solidarity; they can focus on their decimation, but not their emancipation. This sinister portion of the bill strives to reinforce pain at the expense of pride, encouraging young people to internalize the oppression delivered by the dominant culture and make it part of their self-consciousness as “other” in a world whose norms are built on the inherent superiority of the master class. Thus, the law seeks not only to prevent the teaching of histories and values that might empower marginalized people, but further endorses the transmission of destructive episodes and ideologies that can only serve to increase the group’s collective disempowerment.

In all of these ways, HB 2281 is a potent example of legislative bigotry and open persecution of people based on factors such as race and class. As with SB 1070, HB 2281 is also self-violating in that it promotes precisely what it claims to prohibit, namely, ethnic chauvinism and “resentment toward a race or class of people.” Both of these laws – as well as similar ones in the offing being considered by the Arizona legislature – are entirely counterproductive and manifestly unjust. Confronting similar patterns of legislated intolerance and the widespread attempt to reduce a category of people to second-class status based primarily on ethnic origin, Martin Luther King Jr. famously wrote in his landmark essay “Letter from a Birmingham Jail,” following the teachings of St. Augustine, that “an unjust law is no law at all.” King further reminds us, “injustice anywhere is a threat to justice everywhere,” calling upon us to recognize the interlinked nature of destinies and, indeed, the inherent solidarity of our struggles, and further counsels that in this effort “one has a moral responsibility to disobey unjust laws.”

Carrying the logic further, King articulates a framework for resistance that applies as much in Arizona today as it did in the South during the Jim Crow era:

“Any law that degrades human personality is unjust. All segregation statutes are unjust because segregation distorts the soul and damages the personality. It gives the segregator a false sense of superiority and the segregated a false sense of inferiority. Segregation, to use the terminology of the Jewish philosopher Martin Buber, substitutes an ‘I it’ relationship for an ‘I thou’ relationship and ends up relegating persons to the status of things. Hence segregation is not only politically, economically and sociologically unsound, it is morally wrong and sinful…. An unjust law is a code that a numerical or power majority group compels a minority group to obey, but does not make binding on itself. This is difference made legal…. A law is unjust if it is inflicted on a minority that … had no part in enacting or devising the law…. We should never forget that everything Adolf Hitler did in Germany was ‘legal’ and everything the Hungarian freedom fighters did in Hungary was ‘illegal.'”

By denying marginalized peoples their own stories and understandings, HB 2281 likewise denies the “conquerors” the capacity to come to terms with the full implications of history, thus, literally enabling the perpetuation of a state of “denial” that inhibits the development of necessary processes of atonement, accountability and reconciliation. As with laws associated with segregationist and tyrannical regimes throughout history, HB 2281 and SB 1070 are inherently unjust and, hence, are “no laws at all.” They must be disobeyed, not out of spite or hatred, but more so to uplift the oppressors and the oppressed alike, as Paulo Freire has suggested. In this sense, solidarity transcends its narrow bounds and the struggle itself is our finest education.

Randall Amster is professor of Peace Studies at Prescott College, holds a J.D. from Brooklyn Law School and a Ph.D. in Justice Studies from Arizona State University. He publishes widely in areas including anarchism, ecology, homelessness, and social justice; writes regular op-ed columns for media outlets including the Huffington Post and Truthout; and serves on the Editorial Advisory Boards of the Contemporary Justice Review, the Peace Studies Journal, and the Journal of Sustainability Education. His most recent books are Lost in Space: The Criminalization, Globalization, and Urban Ecology of Homelessness (LFB Scholarly, 2008), and the co-edited volumes Building Cultures of Peace: Transdisciplinary Voices of Hope and Action (Cambridge Scholars Publishing, 2009) and Contemporary Anarchist Studies: An Introductory Anthology of Anarchy in the Academy (Routledge, 2009).

This work was originally published by Truthout and is reproduced under a Creative Commons Attribution-Noncommercial 3.0 United States License.