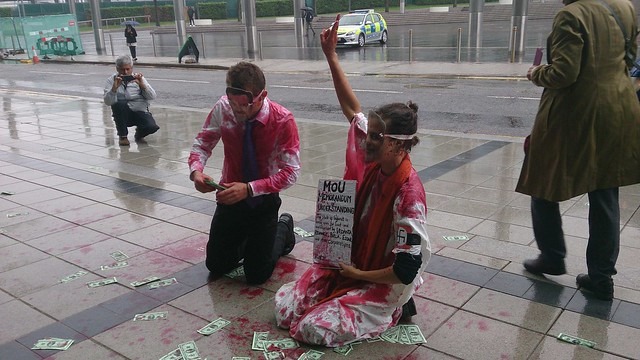 In this digest, we provide some links to resources on Islamophobia in India.  This includes new, recent and older work looking at the rise of Islamophobia.

Our congratulations to the Islamophobia Research and Documentation Center (IRPD) for its new report on this topic.  The report by authored by Paula Thompson and Rhonda Itaoui and edited by Hatem Bazian, ‘Islamophobia in India: Stoking Bigotry’ focuses on the status of Islamophobia in India and is meant to provide a groundbreaking collection of evidence and provide a reference point for all future work on the subject.

The report was published through the Center for Race and Gender’s Islamophobia Research and Documentation Project at the University of California, Berkeley.

VIDEO: Amrit Wilson – The rise of Nativism in India (13 minutes)

Find a full report of the event and all the videos here.

Eyewitnesses and survivors gave harrowing accounts of gang rapes, mass slaughter, brutal mutilation and burning of bodies illustrating the shocking level of brutality suffered by the Muslim population. Gujarat witnessed the worst violence since the partition of India. Over 2000 were killed, 150,000 displaced and over 800 women and girls raped. These atrocities were accompanied by widespread destruction; arson attacks, looting and ransacking of businesses, homes, personal property and the demolition of 132 mosques and religious tombs. Nearly all of the victims of the well organized pogrom were Muslim. The wounds remain raw, with thousands still destitute, living in relief camps, still in fear of their lives.

PRESS RELEASE – India: Gujarat massacre verdict should not be an excuse to let Modi off the hook (June, 2016)

Sheena Sumaria and Sonum Sumaria – directors of the film ‘Even the Crows: A Divided Gujarat’ – joined us to discuss what made them follow the story of the Gujarat massacres in 2002, and what they found out on their way.

Kandala Singh’s dissertation is a valuable resource in setting out the role of public discourse and its language of signs, symbols and narratives in shaping perceptions about ‘the other’ during situations of inter ethnic violence. It focuses particularly on the communication dynamics within the Hindu community during a case of targeted anti Muslim violence in Gujarat, India 2002 to understand the role of dehumanization and prejudice in causing and legitimising such violence. It argues that identity discourses such as the Hindu Right discourse in India contributes to dehumanizing religious minorities, especially Muslims. The process of dehumanization works at multiple levels in society and contributes to human rights violations.  It also links Islamophobia in India with the idea of a a global in particular Western Islamophobia that informs and reinforces the anti-Muslim narratives stoking violence in India.