We need Courage not Deference when it comes to Muslim representation 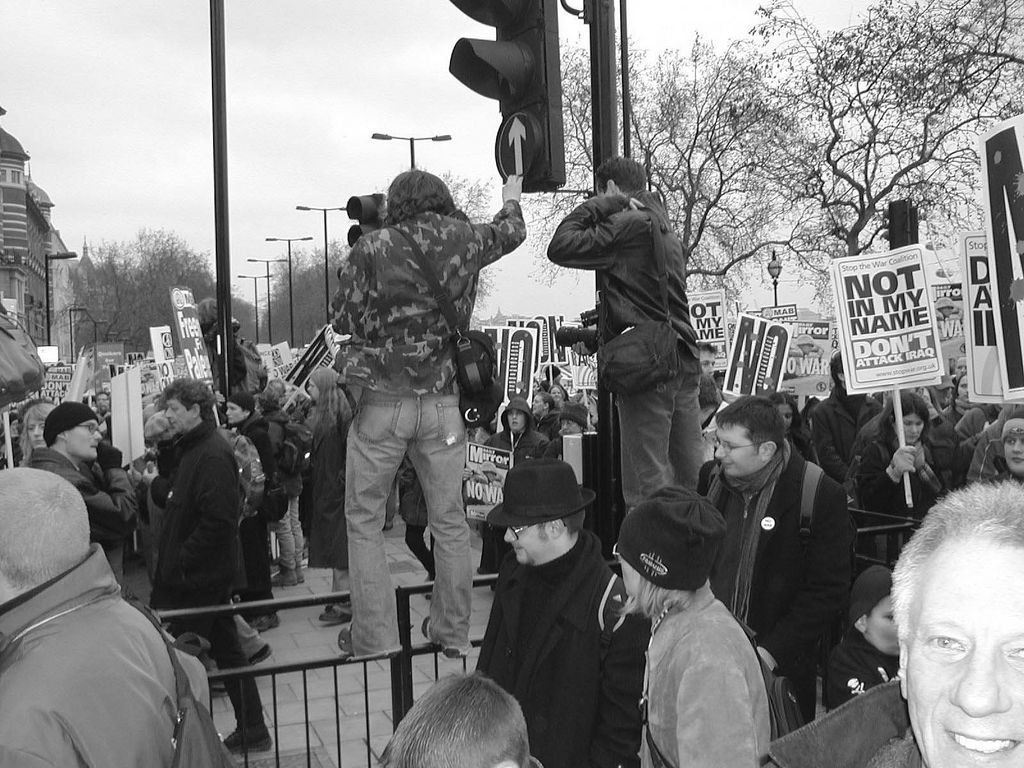 [11 February 2019] I watched the Adam Mackay movie this week, Vice.  It charts the rise of Dick Cheney (or maybe more precisely Lynne Cheney) and his / their stranglehold on power in the US, including and especially during the George W. Bush administration.  Instrumental in pushing for the Iraq war, and the carve up of that country’s resources, the couple and their cronies were in this telling, de facto rulers of the US, responsible for the deaths of hundreds of thousands and a calamitous paradigm shift the violent effects of which we live daily.

Watching the film, I was reminded of the anti-war protests in 2003, days after my son was born.  I remembered a model letter IHRC had produced, that I think I wrote, that was requested by 20,000 people in hard copy for them to send to Downing Street.  As I fell asleep that night I pledged to trawl old hard disks to find a copy.  A day later I perused my bookshelf to find a book I had not finished reading (my 2019 pledge to myself was to complete all such books before starting any more new books and I had just finished Reflections on a Marine Venus by Lawrence Durrell).  I found The Denial of Bosnia by Rusmir Mahmutchehajic and duly spent a few hours completing the 70 odd pages left.  My bookmark was a barely legible to do list from way back when, which I thought to look through for fun before recycling after I closed the now fully read tome.  It had been written on the back of one those model letters.  Find a link here or see the image below. 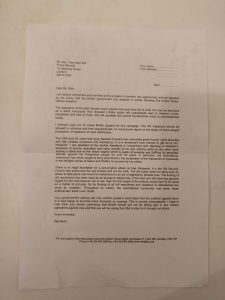 I became angry upon reading it, because it could not be written or distributed today.  Anyone calling out the illegality of the government of the day, or discuss state intervention in Israel because of its human rights violations would turn the hair grey of the 30 somethings now rising in the Muslim community/ies of the UK.  (Un)sagely giving advice to the generations afore and after them on being polite, reasonable and demure, using the language of the mainstream and other such PR-speak that alienates almost all those they seek to mollify with their deference, they preach.  Yes, that’s harsh.  And I had many bitter thoughts about a few of these figures, before I realised the harsh truth of the matter.  I wouldn’t write that letter today either.  I wish I still did, and it is my resolve to do so again, having awoken to this failing but I realise that I too have socialised myself to a way of thinking, being and writing impacted by the delegitimisation of Muslim narratives across one, two, three decades in the West and as many centuries and more globally.

Broken as we are, and delegitimised, how is it that we still seek affirmation from authorities who represent our every move as evidence of our need to be expelled from the few spaces in civil society and public imagination that we still retain?  Last year in Middle East Eye, I wrote a piece entitled, Why I Think Amanda Spielman Should Resign her Oftsed post.  I spoke of the various hypocrisies and examples of racism exhibited in the Chief Inspector of Schools’ claims that girls under the age of 8 should not be allowed to wear hijab at school and that her inspectors had been instructed to ask questions of such girls spotted on school visits.  In it I bemoan how maybe 30 years ago, Spielman would have been lambasted by the media and pressurised to resign, whilst today she is emboldened to carry on regardless.  Not much of a riposte all things considered, but I found that this article was cited by the Tony Blair Institute for Global Change as an example of delegitimising the government and an example of extremism.

Really?  Well obviously no.  But what is clear is that the TBIGC report dumped on the unsuspecting, and I suspect still blissfully oblivious, public at lunchtime on a Friday a few weeks back (itself a sign that its anonymous authors did not want much media attention), will be regurgitated as evidence in the upcoming battle to define what extremism is.  This representation of Muslims, in this case me and my articulation of concerns that many beyond the Muslim community share, is not accidental.  It is deliberate and is done with aggressive and malign intent.  This last ten years in the UK and arguably almost all Westernised settings has seen an acceleration of the accelerated Islamophobia post-9/11.

In his contemplation of the art space in primarily Asia, Ranjit Hoskote (2007) looks to the global post-9/11 imaginary describing the portrayal of the ‘House of Islam’ in the global media as a ‘politics of image which presents the House of Islam as a repository of horror, showing it chiefly through images of violence, terror, desolation, the unreason of the mob, the intolerance of pulpiteers – the model of reportage from zones of crisis and conflict.’  This portrayal is not one of ignorance but a deliberate erasure that reduces, Hoskote continues:

“…Islam’s richly variegated tradition to… bigotry … and violence…, the reflex of picturing it as a breeding-ground for fire-breathing ayatollah and kamikaze martyrs, obscures the fact that Islam was – for nearly a millennium – a vibrant cultural framework that linked South and West Asia with North Africa and West Europe, synthesising Arab, Greek, Persian, Indian, Turkish, Mongol and Chinese influences.  During this millennium, civilization was embodied by the House of Islam (with its emphasis on the illumination of learning, urbane sophistication, social and geographical mobility, and a mercantile economy)…”

In our desire to appease and please, we also erase our own selves, our histories, our stories, scrapping between us instead for recognition from those who will never give it, and who do not deserve our legitimisation.  Not to give it, does not make us the demons they wish to portray us as.  It simply makes us moral.

Back in 2003, that morality was shared by millions.  Of the 20,000 requested model letters, more than half were asked for by people not Muslim.  I recall taking a call at the office from a woman who described herself as middle aged, middle class and English.  She called to say thank you and asked how she could help the organisation.  “You said all the things I wanted to say but didn’t know how to express,” she said.  We haven’t just let the Muslim collective down when, as activists and civil society, we internalise the demonsiation and change the way we speak.  We now see ourselves as we have been misrepresented.  It is (almost) a fait accompli.

My son, now almost 16, found that letter on the table whilst I was writing this.  He read it out loud of curiosity (he also picked up a typo).  It was great to hear those words, but I also heard a voice of alarm in my mind hoping he would not repeat those words at school.  It’s become the instinct of so many of us, especially parents, to suppress what once we could write and speak in numbers.

Back at that million person demonstration against the then proposed Iraq War, a colleague was handing out the letter.  A veteran of the anti-Vietnam war demos, he called out with a cheeky grin, “Carpet bomb Tony Blair with your letters.”  People laughed, shook his hand and took copies.  One woman however popped up behind him and said, “I think Tony will need something stronger than that.”  That woman was Mo Mowlam, former Northern Ireland Secretary.  We need to be brave enough again to say these things and more, now.  The alternative created by our silence doesn’t bear thinking about.

Arzu Merali is a writer and researcher.  She is one of the founders of Islamic Human Rights Commission www.ihrc.org.uk and formerly editor-in-chief at Palestine Internationalist.  Her recent work on Islamophobia include a co-authored book with Saied Reza Ameli, Environment of Hate: The New Normal for Muslims in the UK, and the UK research papers for the EU funded project Counter-Islamophobia Tool Kit http://cik.leeds.ac.uk.