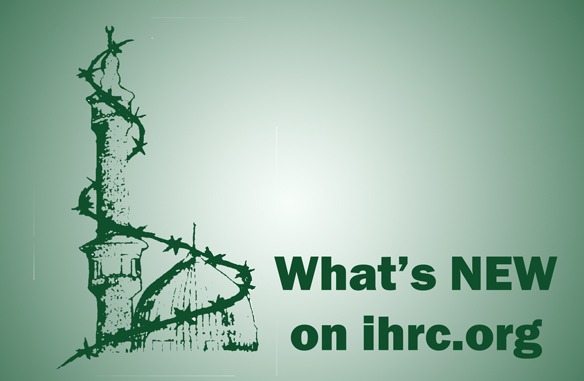 This week, the situation of the Rohingyas deteriorates even further, with reports from the ground coming in of more violence and bloodshed.  Meanwhile at IHRC, we have been making preparations for a number of informative events that will be taking place, including a film screening with Roshan Salih, and an author evening with Houria Bouteldja. You can find out about them below. Please do note them down in your diary.

If you would like to donate to IHRC please contact the office on +44 20 8904 4222 or info@ihrc.org or download a copy of our latest newsletter and fill in one of the donation forms and return to us:

IHRC issued a press release warning of a third massacre against the Rohingya (12/03/2013), as a result of the spread of hatred toward the Muslim Rohingya there has now been violence against Burmese Muslims. This can only be expected when the language of hate, intolerance and demonization is spread throughout the country.

Since the Palestinian Legislative Council (PLC) elections in 2006, parliamentarians from Jerusalem (including a former minister) have suffered intimidation, imprisonment and forced deportation, by the Israeli authorities.

Roshan is an independent documentary maker and has made this documentary which looks at MI5 and spying in the Muslim Community. He shows that a lot of resources are being used for the so-called terrorism threat by the government and they are monitoring the Muslim community more than any other.  He documents the different techniques used to spy on Muslims and how everyone should be aware of this and its implications for civil liberties.

An Evening with Houria Bouteldja

Watch live on IHRC TV online at http://www.ihrc.tv and join us for a conversation with Houria Bouteldja known as the Malcolm X of France.

Houria Bouteldja is a spokesperson of the Party of the Indigenous of the Republic (PIR), which she helped found. She will be speaking about Decolonising France.

Join us for an evening with acclaimed journalist and writer Victoria Brittain who will be talking about her latest book, ‘Shadow Lives’.

Shadow Lives reveals the unseen side of the ‘9/11 wars’: their impact on the wives and families of men incarcerated in Guantanamo, or in prison or under house arrest in Britain and the US. Victoria Brittain shows how these families have been made socially invisible and a convenient scapegoat for the state in order to exercise arbitrary powers under the cover of the ‘War on Terror’.

Can Europeans be Rational?

Julia Suárez-Krabbe on Zabala, Dabashi, Mignolo and the importance of asking the right questions

It’s 10 years since the invasion of Iraq.  Some theories of the whys and hows can be found in the following publications:

War on Iraq: Conceived in Israel
The title of which is self-explanatory
The Cultural Cleansing of Iraq
Which argues that the plan of invasion was to obliterate the state and create a client regime

This week in the UK, we had much discussion over the Royal Charter after the Leveson report.  However not much consideration has been given to the (mis)representation of minorities by the media.

You can buy a hard copy here, or download the PDF for free here.

We also have many other titles on Islam, Muslims and the media.  Try Gunny’s Perceptions of Muslims in European Writing